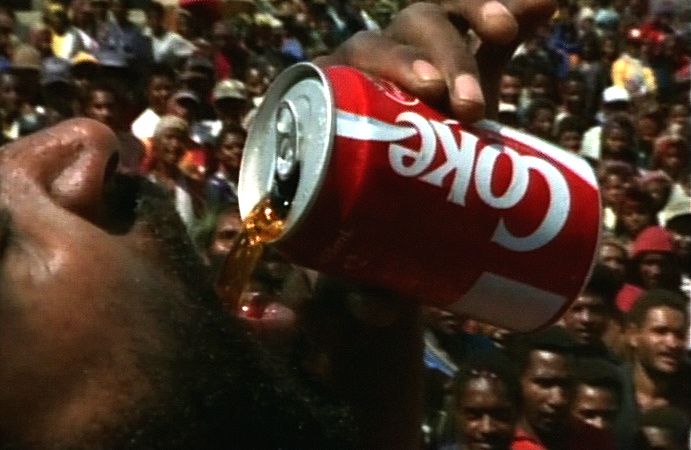 “What, if anything, is truly new about our times?” is the crucial lead question for Michel-Rolph Trouillot’s chapter on “A Fragmented Globality” in Global Transformations (2003, 47). Trouillot already demonstrated the long histories of continuous encounters, centuries of global flows that belie the surprise-story celebrating or lamenting contemporary globalization. I often pair this chapter with the film Advertising Missionaries to link together several different aspects of this account.

Here too, Trouillot begins with a quote from Norman Angell’s The Great Illusion, first published in 1909, to note that “by the first decade of the twentieth century, some knowledgeable observers had already proposed that the main features we associate today with the word globalization fully obtained in the world of finance and politics” (2003:47). One of Trouillot’s main points is that “if we approach globalization as naively as the recent rise of ‘a world without boundaries,’ we find ourselves repeating advertising slogans without knowing how we ended up there” (2003:48).

Nevertheless, Trouillot does designate three processes which seem specific and especially salient in the present period: “the reshaping of the respective markets for capital, labor, and consumer goods; the ongoing rise of finance capital and the social and ideological ramifications of that domination; and the extravagant increase in inequality both within and across political boundaries” (2003:48). While it is certainly always risky to read a chapter that is now over a decade old to tell us about changes in the here-and-now, Trouillot’s diagnosis is remarkably prescient. Most of what he writes about polarization and fragmentation, the rise of finance capital, the fragility of that system, and inequality has not only more than come true, but is now even more apparent to a wider range of people than might have been aware of such issues in 2003.

First, there is the obvious message that this is a new religion:

We are being asked to endorse growth as a moral value. We are asked to take as a religious–that is, unquestionable–tenet the proposition that productivity in any domain, anywhere, anyhow is good for humankind as a whole. . . . We are being asked to renounce worldviews that suggest the ethical solidarity of humankind. In short, we are being asked to accept a prepackaged formula about what it means to be a good and proper human being in all times and places, to endorse one vision of humanity, and an odd one at that. Visions of humankind are, of course, among the favorite topics of sociocultural anthropologists. We have spent much disciplinary energy over more than a century in showing how such visions vary across time and space. We should have a say in that debate. (2003:56; see also Anthropology, Moral Optimism, and Capitalism)

Second, Advertising Missionaries helps show another aspect of what Trouillot says is perhaps truly new about our times–a global market for consumer goods. Wokabout Marketing sells ways of eating and drinking, ways of dressing and washing and smelling, ways of communicating and interacting, which are to a great extent a recognizable package of consumer goods and behavior, all over the world:

Prompted by global media, more human beings than ever before share similar lists of the products they need to consume and the objects they need to possess in order to achieve individual satisfaction. In that sense we are truly witnessing for the first time, especially among the youth, a global production of desire. (2003:60)

Third, Advertising Missionaries demonstrates that although these product lists may be similar (and there is a brief moment of disagreement when someone asks for local rather than multinational products), there continue to be enormous inequalities of access. From the obvious relationship of PNG to the global economy, to the relationship within Wokabout Marketing as the manager flies into the highlands, to the lifestyles of the advertising missionaries as compared to the highlanders–fraught and intense inequalities abound.

It is also the case, and this is an important fourth point, that even in the market the goals of the PNG highlanders, to incorporate and fuse these products with the best of what they see as tradition, demonstrate that “human beings everywhere have had and will have goals that are not market-oriented” (2003:61).

Finally, Advertising Missionaries helps show–although this point could be better elaborated by talking about sweet potatoes and steel axes–the linkages between this round of globalization and previous histories of interconnection, from missionization that had already made most of PNG Christian, to the fact that even PNG highlanders were speaking English (the film unnecessarily subtitles some of this, as if someone who looks like a PNG highlander obviously could not be understood in English). But this also amounts to a revamping and regeneration of colonial-era relationships in the contemporary:

Fewer human beings are convinced today, than, say, in the 1960s that the whole of humanity is headed in the same direction. Now add to this the not so hidden fact that the greatest number of those who are thought to not be moving, not moving fast enough, or are condemned to never move are also those likely to be described as non-Westerners, whether or not they live–or were born–in North Atlantic countries. The result is a stunning renewal of the symbolic power of the West on the global stage. This renewed global power repairs and revitalizes the Savage slot and resonates in local arenas down to individual encounters. (2003:77)

Advertising Missionaries to Academia: The Death of Utopia

One of the things that hit me hardest in “A Fragmented Globality” was Trouillot’s take on “the death of utopia” (2003:66). In this section, Trouillot explains how the ability to predict and manage mid-term and long-term futures has become increasingly uncertain. “Until recently, political science, economics, and sociology basked in the glow of this mid-term and related claims of control” (2003:68). This claim of prediction and control is now substantially reduced:

The future as we knew it is now increasingly fractured into two new parts: a near-present that challenges our technical mastery, and an aftermath, out of real time, that our imagination has yet to seize. . . . The exigencies of this near-present now seem to reduce our grip on a long-term forever postponed. The content of that long-term is open to question. . . . The need to adapt quickly to tomorrow’s exigencies, yet the inability to envision beyond them, is now part of the lived experience of an increasing number of human beings. (2003:68)

This was essentially my experience from 2010-2015, serving on both a faculty governance body and simultaneously participating in efforts to imagine a future college. On the one hand, the exigencies of immediate enrollment swings, budget variance, and needs to staff courses, as described in Liberal Arts College Planning, lead to almost daily adjustments and re-positioning. On the other hand, the mid-to-long-term future is almost impossible to predict or imagine. That this is happening within academia–the one area in which people are supposed to be able to think, reflect, and plan–is most disturbing: “Anything that takes time to show results–research, slow yet reliable growth, calculated yet potentially rewarding risks–become secondary, engulfed by the rapidity of daily stock market assessments” (2003:52)

There’s much more that could be said and discussed, which I hope emerges in class conversation. It’s another densely-packed and prescient chapter in a book that in many ways seems to be an outline or précis for a much longer, yet-to-be-written work.

December 2014 Update: See my economist colleague’s The Corporatization Virus for back-and-forth about the efficiency of corporate capitalism in the contemporary university.