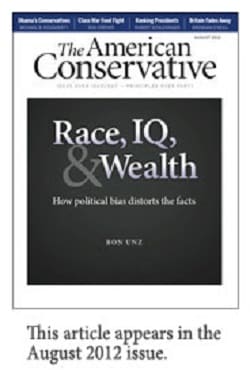 After all I did wrong since leaving Montana–liberal elite education, studying anthropology, and then even becoming an East Coast professor–I was still in 2012 quoted somewhat approvingly in The American Conservative.

Ron Unz read my Race/IQ: Is It “Game Over”? (crossposted at RonUnz.org). Here was my response, which I dropped into the comment stream:

Thank you for courageously publishing on these matters and defending your position. Hang in there!

You may not have noticed this link, but “Mike the Mad Biologist” is also taking a look at your work and has an interesting take: The Alabama-Massachusetts IQ Gap, German Style.

I also thank you for reading my analysis. I would first clarify that although I would love to be a “popular academic blog,” I am merely a bit player among anthropology blogs, or in other words a marginal voice in a marginalized discipline at a small liberal arts college. The Facebook likes are somewhat illusory. You could have far more likes if you put your mind to it.

I would also say that my declaring your article to mean “game over” is more an analysis of the socio-political situation around this research. Obviously the diehards will never concede. They will be vehemently denouncing your article for years to come. But what interests me here is how well you have basically pushed what was a marginal position into the extreme fringes, which is why I do think this is “game over,” at least for all practical purposes.

Your analysis seems to show there has been wrong-headed thinking on IQ. Sure, like height IQ is heritable, and let’s just say it is at .8, as heritable as height. But people who are malnourished come in at considerably less than their genetic potential. It may take a few generations at full nourishment to reach height potential, but it’s a relatively quick move. That seems to be what’s happened with the IQ scores, that people for the reasons you cite–poverty, education, rural deprivation, and perhaps others we don’t fully understand–were underperforming potential. It can take a few generations, but under the right conditions, average IQs get a lot closer. As you note, there may be still some small variation between populations, and of course there will always be a range of variation within populations, but that’s not at all what the hardline race-IQ people have made it out to be.

My question is if you think your analysis should be used to try and change any of the facts-on-the-ground, so to speak. Would you recommend different kinds of policies–domestic and international–based on this analysis? Would you suggest different kinds of research funding based on this analysis? How might these findings contribute to making a difference in the world?

While like you, I do feel–with some relief–that things are moving in the “right direction,” I do wonder if any of this matters.

P.S. While reading through some of your posts, noted your thoughts on the passing of Alexander Cockburn at the end of Unz on Race/IQ – Rejecting the Ostrich Response. Indeed a tragic loss, and may we all share and learn from Cockburn’s courage.