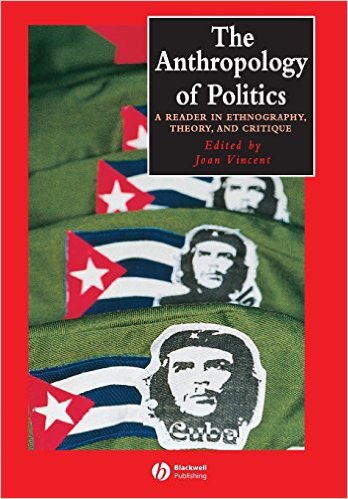 These readings continued part 3 of the Hartwick College Introduction to Anthropology 2016 course. I revisited some of this material in 2020 using a different textbook in the class on Political Organization.

Rough notes below followed by Disqus comments. For more information on the De León chapter, see the excerpt in Cultural Anthropology 2019

Language: What is Ongka saying?
Economics: What is the Moka system?
Politics (this class): What authority does Ongka have?
Kinship: How does kinship intersect with economics & politics?
What evidence of colonial encounters? (discussed in the previous class)
The film series is titled “Disappearing World.” Is Ongka’s world disappearing?

Lavenda & Schultz title their chapter “How do anthropologists study politics?”

One of the basic questions of Anthropology: How do people organize?

Early assumptions were that Euro-American institutions are the correct form of government, law, political order (Lavenda & Schultz:352)
Assumptions that others are either warped, primitive, or lacking, in “state-less” societies. This corresponds to contemporary idea of “spreading democracy.”
Early anthropologists were sometimes sent to investigate how people were displaying amazing feats of organization, such as Resistance (The Nuer), Big Mokas, and with The Azande (Lavenda & Schultz:352)
At times, assumed kinship as organizing principle without state government (Assumption that in “their” societies they mix kinship and politics, whereas our evolved society is a meritocracy)

Discuss: This US election pits Domination against Hegemony. #Anthropology https://t.co/4I7HhIy8Jh