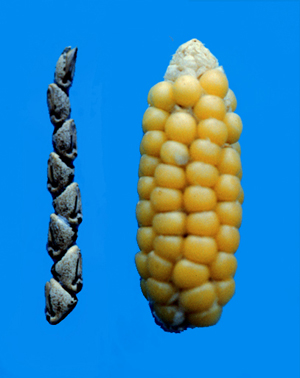 [image credit: Photo by John Doebley at the interesting “What plant genes tell us about crop domestication”]

This is the comment page for two readings about plant and animal domestication.

This is the second part of an archaeology unit in the Hartwick Introduction to Anthropology 2016 course. Rough notes below and then Disqus comments.

Diamond claims it is a need, not a choice
Population pressures
Trade quantity for quality
Adopt agriculture –> drive out others
Seductive blessing, still unrealized for many
[One of my most popular blog-posts is an analysis of Diamond’s Worst Mistake in the History of the Human Race]

At this point, a clip from Guns, Germs & Steel (film version)

Opening paths of human-plant-animal interaction
Changes in human-plant-animal relationships = co-evolution
I prefer this to ideas of interference and control
Humans may act deliberately, but hardly in control
Humans, plants and animals continue to interact with “wild” counterparts
Is not the moment when people go from being “natural” to “unnatural”
[I’ve posted about this as domestication opening Relational Pathways]

How did domestication occur?

Curious temporal parallels of domestication episodes
But on closer examination archaeology
“downplays single-cause explanations of domestication . . . people appear to have been auditioning a wide variety of region-specific plants and animals for leading roles as domesticated resources. . . no evidence for population pressure during the 2000 years or so when plants were first being domesticated” (Zeder and Smith (2009)