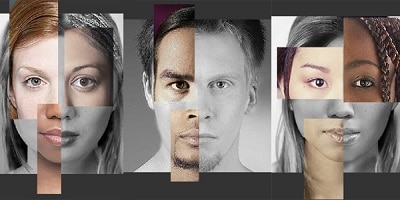 For my Intro-to-Anthropology 2016 class, we tackled the issue of Evolution and Race with these materials:

The material was discussed in the 2016 Intro-to-Anthro course. For a version of this material using the 4th edition of Lavenda and Schultz, see the Human Variation 2018 class. And for 15 free-to-read articles through August 2020, see Race, Racism, & Protesting Anthropology.

Anthropology was born during European colonialism. At the time, Europeans were asking some fundamental questions like: How do we explain difference? Are other people equally human? (For more on this history, see section on Human Nature & Anthropology.)

Anthropology on Evolution and Race

For the most part, the separation of race and culture has become accepted. What many people still cannot understand is how racial classifications are also inadequate to describe biological difference. (I’ve posted about early anthropology and skull shape measurements as Human Skulls: Boas Head Shape Studies Revalidated.)

The Modern Evolutionary Synthesis or “neo-Darwinism” combined Darwinian mechanisms with Mendelian heredity. “In anthropology, perhaps the most significant contribution of neo-Darwinism was the way it undermined the nineteenth-century anthropological concept of ‘biological race,’ refocusing attention on a new understanding of biological species” (Lavenda and Schultz 2015, 60).

Clinal: most features, like skin color change gradually (Lavenda and Schultz, 62)
Other features vary independently of each other
Classifications by different criteria produce different groupings

Humans do vary biologically
with potential health effects, and even for abilities like “intelligence”
Race = “culturally constructed label that crudely and imprecisely describes real variation” (John Relethford, “Race and global patterns of phenotypic variation,” 2009, 20)
But crude labels are socially and historically real, influencing access, opportunities, and outcomes: with even greater health effects than ancestry
and with even greater effects for abilities like “intelligence”

[This phrasing refers to a time when the science seemed completely locked down on race, prompting Jared Diamond to write Race Without Color.]
“There are no races, there are only clines”
Livingstone, 1964 in Lavenda and Schultz, 62
As evolutionary synthesis demonstrates, individually-inherited traits could differently combine
Darwin, “no such thing as a fixed species” (Lavenda and Schultz, 78)
Lewontin, “The apportionment of human diversity” (1972)
More diversity within so-called races than between them

[I’ve posted about this as a “race revival” that attacked the anthropological paradigm.]
Challenge to Lewontin
“A Family Tree in Every Gene” (Leroi 2005) = Despite within-group variation, clusters [for further consideration of Leroi, see Is Race “Real”?
Genetic testing for ancestry: see Lavenda and Schultz, 67-69 on DNA tests and ancestry, “Branches but Few Roots”
“If races don’t exist, why are forensic anthropologists so good at identifying them?” (Sauer 1992)
This is where Goodman 2005 comes in: Remember what Goodman says about his opening quotes: “Leroi and Thomas are both wrong” (18)

Hypodescent = child’s race “lowered”
White + Black = Black
In some states, laws by fraction
1/4, 1/8, 1/16, 1/32
In extreme cases, the “one drop” rule
Some people can change race by getting on a plane
Latin American & Caribbean classifications can be different
May use hyperdescent or recognize mixtures as mestizo or mulatto
Or like Brazil, have many color categories
Some people have changed their race by crossing a state line
See this 2016 article 220 years of census data proves race is a social construct.

Cultural construction of race has real effects
Wealth in 2010, average white wealth at 22x average black wealth
For 2016, see On Views of Race and Inequality, Blacks and Whites Are Worlds Apart
Housing; Education; Healthcare; Marriage
Those effects are also biological
Infant mortality rates (2004, 2.4 times higher for black Americans)
Life expectancy (2004, death rate 30% higher for black Americans)
Nutrition & health
Put differently, how long will race “be a thing”?
[I’ve posted about some of these issues as “Social Construction of Race = Conservative Goldmine.” See also the 2016 Rethinking Pedagogy of Race in Anthropology, Part 1 and Part 2.]

Our social practices, ideas, and classifications have biological implications
Plasticity, poverty, and political marginalization–especially in early childhood
“Race becomes biology through the embodiment of social inequality” (Clarence Gravlee in Lavenda and Schultz, 65)
Race–and racism as political-economy–becomes biological
(but not forever-fixed genetics)
[I’ve tried to provide a longer summary of this great Gravlee article as Race Becomes Biology, Inequality Embodied.]

Updates for Evolution and Race

Image credit, American Anthropological Association (AAA) Project Race: Are We So Different, examining Evolution and Race. For more on this project, see the 2017 reflections by Yolanda T. Moses After 10 years the AAA Race Project is Still Needed Now More Than Ever:

We need to be more intentional and strategic about tackling the issues of “white denial” and “white privilege” as we continue this very important work. We must engage people who “still do not see” or who not want to see, that they are beneficiaries of the historical and contemporary consequences of institutionalized racism and its disproportionate negative impact on the lives, bodies, and life chances of people of color in this country.

For a June 2020 update, see the AAA statement on how Anthropologists must apply resources to combat race-based injustices, although also see the thoughts on US White Supremacy and Anthropology.