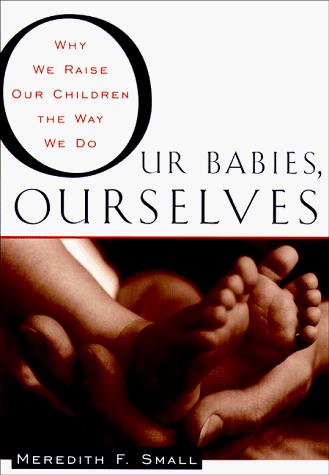 This is the comment page for a first attempt at understanding how anthropologists think about culture using Lavenda & Schultz chapter 8 (part 1 of 2), “How Does the Concept of Culture Help Us?” (229-236) and Meredith Small, “Our Babies, Ourselves,” originally in Natural History (1997). This discussion is part of the Hartwick Introduction to Anthropology 2016 course.

There should be Lavenda & Schultz Chapter 7 ½

Why are they like that?
Prevalent ideas were of Biological or racial determinism and Environmental determinism
Organizing people into a hierarchy of races, hierarchy of social groups
Anthropology (eventually) says NO!
Human difference is due to
CULTURE

Human behavior is patterned
“related cultural beliefs and practices show up repeatedly in different areas of social life” (Lavenda & Schultz:230)
Not random
Structured, or more than sum of individual behaviors
Patterns have to be understood on their own terms

Those patterns are learned
Not determined by natural world either within human body or outside human body (although we never want to lose sight of these aspects or consider them as separate from culture)
Structuring through:
social transmission, “shared” (Lavenda & Schultz:230)
symbolic coding (Lavenda & Schultz:232)
some degree of human consciousness
“cannot help but see the world in symbolic categories” (Deacon in Lavenda & Schultz:233)
The idea of culture has been fruitful for shared arguments & analysis.

“no sharp boundaries separate mind from body, body from environment, individual from society, my ideas from our ideas” (Lavenda & Schultz:234)
No human “stripped of culture” (Geertz in Lavenda & Schultz:237; see also my post on Human Nature and Anthropology)
Coevolution (237)
Biocultural, and in transformed niche-constructed environments
Bourdieu’s idea of habitus (230)

Sympathetic understanding in its own terms (237)
Against ethnocentrism
“that one’s own way of life is natural or correct, indeed, the only true way of being fully human” (Lavenda & Schultz:237)
After all, be careful when judging other learned patterns of behavior
Become aware of “unsuspected possibilities” (Lavenda & Schultz:239)–invites tolerance
Means to understand, not necessarily approve

Our Babies, Ourselves by Meredith Small

Parenting Practices
Gusii: “The Gusii mothers were appalled. . . . These American women, the Gusii concluded are clearly incompetent mothers” (LeVine:1).
Dutch: The “three Rs” (Harkness and Super:2)
Differences not just in far-away others
Against ethnocentric child-rearing

From ethnocentrism to ethnopediatrics: Major issues for parents

Importance of cultural sensitivity. But also consider issues of power and choice

I know I have helped residents broaden their views when their lectures on good mothering are replaced by such comments as ‘What a gorgeous baby! I can’t imagine how you manage both work and three others at home! (Tronick:3)

[I’ve posted thoughts about “Our Babies, Ourselves” as Childcare, Culture & Power]