Home » Introduction to Anthropology 2016 » Why Did Humans Build Cities? 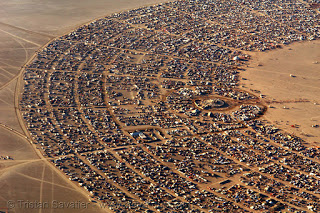 This was the comment page for three readings about social complexity:

This was the third part of an archaeology unit in the Hartwick Introduction to Anthropology 2016 course.

Class begins with an interesting exercise in PowerPoint commands, to illustrate what Robert Wenke writes:

The important thing is that the ability and incentive to make these investments are radically different from the capacities of Pleistocene bands, in that they imply the ability of some members of society to control and organize others. (1999:348 in Lavenda & Schultz:214)

What does it mean to be “Complex”?

Not inevitable
Various “prime mover” hypotheses:
Hydraulic (218)
Long-distance trade
Environmental Circumscription (219), also called “population, war, and circumscription”
None of which explains all states (Lavenda & Schultz:220)
“Many of the remains of the earliest complex societies are incomplete and could be compatible with more than one form of social organization” (Lavenda & Schultz:220)

Challenge traditional accounts of state formation
“If the first complex societies on the Peruvian coast were based on a steady supply of food from the sea, rather than agriculture, the notion that village agriculture must precede the rise of social complexity is dealt a blow” (Lavenda & Schultz:224)
But 2013 research indicates they had maize (see Maize in diets of people in coastal Peru dates to 5,000 years ago)
Inka managed incredibly complex state without traditional written language (Lavenda & Schultz:224-225; see Gary Urton’s Signs of the Inka Khipu: Binary Coding in the Andean Knotted-String Records)

Back to idea of Bands – Tribes – Chiefdoms – States

Unilineal cultural evolutionism
However, we now reject “lockstep determinism” (Lavenda & Schultz:176)
“Points on a continuum”
“a single social group may move back and forth between more than one of these forms over time”
Difficult to discern social organization from artifacts
And we now know people and social groups are often fluid over time.
And then there is one of my favorite forms of social organization, transegalitarian societies: “seemingly poised between equality and hierarchy, transegalitarian societies have flourished at various times and places up to the present day, and they do not appear necessarily to be on the way to becoming anything else in particular” (Lavenda & Schultz:217 drawing on Brian Hayden in Foundations of Social Inequality).

We discussed the Michael E. Smith and Matthew T. Bradley blog-posts above, although as a note of caution I tried to say that even in apparently “self-organizing” neighborhoods one should be careful to understand power (see Is Burning Man becoming less overwhelmingly white? and h/t to “Discuss White Privilege” in this comment thread). See also Race and Suburban Homogeneity: The Flanner House Homes and Post-Urban African America by archaeologist Paul Mullins, which I also used in my Cultural Anthropology 2016 course.

As a way to end this unit and question our progressivism, I show the Scott Dikkers’ film The Astounding World of the Future now available on YouTube.