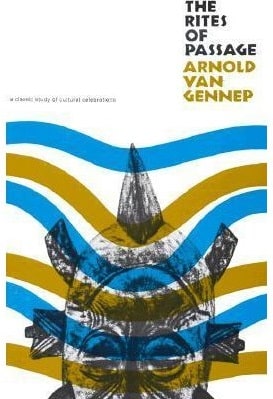 For understanding the question of “How Do We Make Meaning?” there is a chapter with that title in the textbook Anthropology: What Does it Mean to be Human? This chapter concerns many areas of life, including play, art, music, myth, ritual, symbols, religion, and worldviews. This was for my Introduction to Anthropology 2017 class. Note that I revisited some of this material in a 2020 Intro-to-Anthropology course for a class on “Supernaturalism.”

The assignment focused on locating particular passages in the chapter and using them to analyze something students experienced in their own lives. One example was the discussion of “rites of passage” (Lavenda and Schultz, 304-306). Many people have found the idea of these rituals as commonly containing stages–separation, transition or liminality, reaggregation–to be an interesting way to examine social behavior.

In January 2018, Sherry Fukuzawa discussed Liminality in the Classroom for Teaching Anthropology: “it is Arnold van Gennep’s Les Rites de Passage that continues to inform my anthropological teaching experience most profoundly. The universality of the separation, liminality, and reaggregation/incorporation makes this a key piece of theory for engaging students.”

In 2017, Hugh Gusterson posed interesting questions in Reconsidering How We Honor Those Lost to War:

Does Washington really need 18 different monuments to the North’s victory in the Civil War, many of them statues of military officers whose names would otherwise long since have been forgotten? You might think from the statues dotted around the city that the Civil War was fought entirely by Union officers on horseback. I’m not saying we should erect statues of Confederate officers for balance. But aren’t there other ways of broadening the Civil War narrative etched in stone and bronze? Could we not, for example, create a space to memorialize the city of Atlanta, which was razed to the ground by General William T. Sherman? And how about a statue of a liberated slave fighting to keep his freedom?

In a society that has seen epochal change over a few generations, what remains to hold people together and offer them a sense of continuity and meaning? In Songs for Dead Parents, Erik Mueggler shows how in contemporary China death and the practices surrounding it have become central to maintaining a connection with the world of ancestors, ghosts, and spirits that socialism explicitly disavowed.

Drawing on more than twenty years of fieldwork in a mountain community in Yunnan Province, Songs for Dead Parents shows how people view the dead as both material and immaterial, as effigies replace corpses, tombstones replace effigies, and texts eventually replace tombstones in a long process of disentangling the dead from the shared world of matter and memory. It is through these processes that people envision the cosmological underpinnings of the world and assess the social relations that make up their community. Thus, state interventions aimed at reforming death practices have been deeply consequential, and Mueggler traces the transformations they have wrought and their lasting effects.

For more on the challenges of approaching music anthropologically, see Music of Anthropology.