Home » Intro to Anthro 2017 » Is Capitalism the Best Economic System? 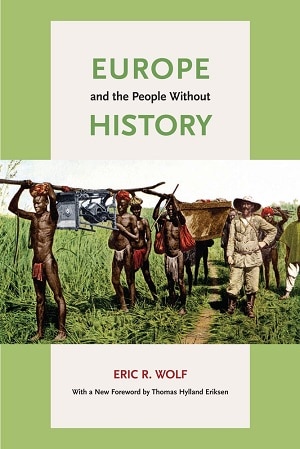 Is Capitalism the Best Economic System?

For the final part of Intro-to-Anthropology 2017 we tackled big and controversial questions anthropology has attempted to answer. Here’s a big one: Is Capitalism the Best Economic System? For this question, I always like to highlight the book by Eric Wolf Europe and the People Without History.

The two readings for “Is Capitalism the Best Economic System?”:

This material was for my Intro-to-Anthropology 2017 course. For a 2021 update, see Economies.

Capitalism is made to feel natural, to feel inevitable, to seem like the only way to be human.Click To Tweet
Most answers to the question of “Is capitalism the best economic system?” suffer from a range of biases anthropologists label ethnocentric. For most people, it is the only system that we know, and so it is made to feel natural, to feel inevitable, to appear as if it is the only true way to be human, or rooted in human nature. As when we consider the concept of culture, an anthropological perspective should make us suspicious of claims that one particular way of human organization is the one and only divinely sanctioned or natural way to be a human.

Anthropologists begin by taking a broad approach to the idea of economic systems. Economic anthropology considers “decisions of daily life and making a living” (Richard Wilk in LS:324) or “questions of human nature and well-being” (Hann and Hart in LS:324).

One example of a different exchange systems are those run through ideas of reciprocity (Lavenda & Schultz 2015:329). Such reciprocal exchange relationships characterize gathering and hunting societies. For anthropologist Marshall Sahlins (drawing on the work of Richard Lee), this very different way of thinking about human needs led him to coin the phrase the “original affluent society” (in Lavenda & Schultz 2015:338). As in relationship to Jared Diamond’s “Worst Mistake,” such re-investigations of hunting and gathering challenge the progressivist perspective. When Richard Lee asked Ju/’hoansi why they did not grow crops: “Why should we, when there are so many mongongo nuts in the world?”

As Lee discovers during his work, an economic system based on reciprocity can lead to very different social attitudes. This becomes clear as people respond to his attempt to “repay” his hosts with a Christmas Ox! (See Eating Christmas in the Kalahari.)

While economies certainly evolve over time, they do not necessarily follow a natural selection mechanism which places everyone on the path to a market economy. As we see in how anthropology asks us to reconsider simplistic and deterministic models of evolution and natural selection, evolution is simply change over time. It comes with no inherent directionality.

Well before the European voyages of exploration, many different economic systems had come and gone. Empires and vibrant cities had risen and fallen. As archaeologists McAnany and Yoffee write (in Lavenda & Schultz:337):

Can anyone say that the present balance of economic and political power will be the same in 2500 as it is today? For example, in the year 1500 some of the most powerful and largest cities in the world existed in China, India, and Turkey. In the year 1000, many of the mightiest cities were located in Peru, Iraq, and Central Asia. In the year 500 they could be found in central Mexico, Italy, and China. In 2500 B.C.E. the most formidable rulers lived in Iraq, Egypt, and Pakistan. (Questioning Collapse 2010:10)

Capitalism’s Origins in Colonialism and Slavery

Another major misconception to address for considering “is capitalism the best economic system?” is the idea that capitalism was born in Europe during the Industrial Revolution. To really examine the origins of capitalism we need to look into the time period from 1500-1800, to the American colonies, and to coerced labor.

One of the most important stories comes from the mines of Potosi. The silver of Potosi would transform the world economy. From around 1570-1650, Potosi became one of the largest cities in the world, larger than London and Paris at the time. Potosi became “the first city of capitalism” in the words of anthropologist John Weatherford. And although there are various ideas about how the US dollar ($) sign emerged, the most plausible is that it came from the Potosi mint mark. (See also Lo que vale un Potosí: la montaña que traga y lo que cuesta el dinero.)

After that, the story of capitalism shifts into the Caribbean, where British, French, and Dutch colonial planters seized islands once under Spanish control and began to establish sugar cane plantations. As anthropologist Sidney Mintz has argued, the Caribbean sugar plantations transformed global diets, eventually feeding the workers of the European Industrial Revolution. Mintz’s even more radical argument is that the slave-based plantation system provides a template for European factory organization.

World of Humankind as Interconnected Processes

Eric Wolf describes a world of interconnection: “The central assertion of this book is that the world of humankind constitutes a manifold, a totality of interconnected processes, and inquiries that disassemble this totality into bits and then fail to reassemble it falsify reality” (1982:3).

Wolf drew on Karl Marx to delineate three broad modes of production (in Lavenda & Schultz 2015:333): A Kin-ordered mode of production, which would correspond to most gathering & hunting, horticulture, and some herding societies. A Tributary mode, corresponding to many farmers and herders with a political ruling class. And finally a Capitalist mode, in which production is for profit and leading to industrial intensification.

For Wolf, the “people without history” not only really did “have history,” but they made capitalism and Europe possible. Moreover, the people anthropologists studied had already been shaped and transformed by the global transformations from 1500-1900, long before the first academically-trained anthropologists ever did ethnographic fieldwork.

So for example if we turn back to Richard Lee’s work, mongongo nuts are great but what goes un-discussed is the German-led colonial genocide of 1912-1915 (Robert J. Gordon, Hiding in Full View, 2009). If Gordon is correct about the genocide in 1912-1915, then it would have had obvious demographic effects at the time of Lee’s work.

Perhaps more than any other economic system or mode of production, capitalism seems to make people as well as natural resources disposable. This happens both globally and within each country. Such disposability has often been seen with regard to race, ethnicity, gender, and for immigrants. We can also observe this disposability by looking at what happened to previous capitalist centers like Potosi or Caribbean sugar plantations. But today, we can also see this happening in the capitalist heartland of the United States. People who were once the engine and backbone of industrial capitalism seem to be no longer needed. As anthropologist Marc Edelman writes: “Sacrifice zones–abandoned, economically shattered places, with growing social and health problems–are spreading in historically white rural areas and small towns across the United States. Rural decline, rooted in economic restructuring and financialization, exacerbates racial resentment and fosters regressive authoritarian politics” (February 2018).

Also see the Somatosphere series on “Toxicity, Waste, and Detritus,” including:

In Summary: Is capitalism the best economic system?

We owe it to ourselves and to our interlocutors to say loudly that we have seen alternative visions of humankind-–indeed more than any academic discipline–and that we know that this one . . . [a capitalism] that constructs economic growth as the ultimate human value . . . may not be the most respectful of the planet we share, nor indeed the most accurate nor the most practical. We also owe it to ourselves to say that it is not the most beautiful nor the most optimistic.

Anthropology says capitalism 'may not be the most respectful of the planet we share, nor indeed the most accurate nor the most practical (system).... It is not the most beautiful nor the most optimistic.' --Michel-Rolph TrouillotClick To Tweet

So what should we do?

Here it is useful to explore the anthropology of food and nutrition (Lavenda & Schultz:343-345) through the work of Carole Counihan Around the Tuscan Table: Food, Family, and Gender in Twentieth Century Florence

3. Don’t be afraid to think big and differently about economic systems

In the end, anthropology tells us that as we wonder “is capitalism the best economic system?” we should not be afraid of “out of the box” thinking about economic alternatives. One interesting and provocative idea is of Walmart Socialism, or a rethinking of how contemporary capitalism has re-shaped production, distribution, and consumption.

As Elizabeth Bruenig bravely writes in the 6 March 2018 Washington Post, It’s time to give socialism a try:

I would support a kind of socialism that would be democratic and aimed primarily at decommodifying labor, reducing the vast inequality brought about by capitalism, and breaking capital’s stranglehold over politics and culture. I don’t think that every problem can be traced back to capitalism: There were calamities and injustices long before capital, and I’ll venture to say there will be after. But it seems to me that it’s time for those who expected to enjoy the end of history to accept that, though they’re linked in certain respects, capitalism seems to be at odds with the harmonious, peaceful, stable liberalism of midcentury dreams. I don’t think we’ve reached the end of history yet, which means we still have the chance to shape the future we want. I suggest we take it.

In some ways when trying to think about the question of “is capitalism the best economic system?” anthropology faces the impossible tasks:

Which is a great way to explore the theme of Why Does Politics Matter?