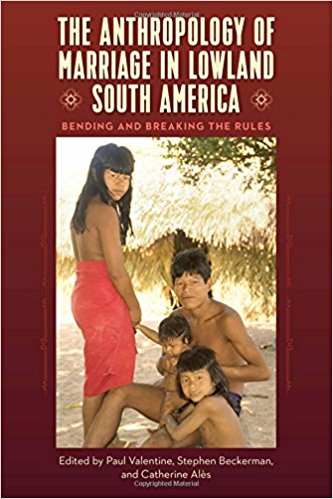 This material was for Introduction to Anthropology 2017. In 2020, I used a new textbook to revisit and reorganize the material on Family and Marriage as well as Kinship and Gender.

When we examine typical US kinship charts, we expect to see a number of “neolocal monagamous families” (Lavenda & Schultz:398) or what is called the nuclear family. While there are certainly many examples of nuclear families all over the world, we tend to see and portray the nuclear family as universal. Even in the United States, as Lavenda & Schultz point out, in 2000 only about one-quarter of the US population lived in a nuclear family (2015:398). More recent numbers suggest that as of 2013 just 19 percent of homes in 2013 were married couples with children. When looked at cross-culturally and historically, the neolocal nuclear family seems to be something that arose in a historically particular time and place rather than a natural or universal kinship and marriage convention.

Monogamy, or being married to one person, probably characterizes the majority of marriages in most societies. Monogamous marriages promise “until death do us part,” although such patterns are uncertain. “Today, some observers suggest that we practice serial monogamy–we may be married to several different people but only one at a time” (Lavenda & Schultz:394).

Although for those who ask “is marriage natural?” they probably have monogamy in mind, forms of polygamy have also been considered natural and in some cases highly valued.

For an example of polygyny, I like to use the first part of the film Masai Women, part of the Disappearing World film series.

Although polygyny has been widely studied and commented upon, polyandry is usually seen as one of the rarest forms of marriage. “Polyandry is the rarest of the three marriage forms” (Lavenda & Schultz 2015:394). The classic cases of polyandry are in highland Tibet. Many introduction to anthropology courses use the article “When Brothers Share a Wife” by Melvyn Goldstein to illustrate the practice of fraternal polyandry.

However, Alice Dreger’s article “When Taking Multiple Husbands Makes Sense” argues that polyandrous practices are much more widespread than some anthropological depictions:

In the United States, people tend to believe that romantic love is the ideal basis for marriage. We also believe that “love conquers all” and thus brings a freedom and exogamy to our romantic and marriage choices. But statistically, a vast majority of US marriages are endogamous by social class. How does that happen? Evidence suggests that in addition to social stratification by zip code, the educational system helps guide choices to be endogamous within social class.