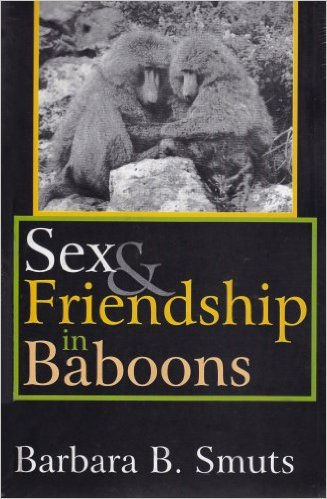 What are friends for?

This is a page for two readings on “primate friends,” especially using the article “What are friends for?” by Barbara Smuts:

Beware Being Bamboozled by Baboons

In other words, Smuts is not studying baboons because “they are just like us.”

Why did Smuts study baboons?

Smuts outlines what she terms the “Dominance Hypothesis” (38, 44), although really this is not so much of a hypothesis as it is the translation of popular stereotypes into scientific-sounding language. In this stereotype, females are passive objects of male competition. Females have offspring, whereas males become the protective providers, who are still aggressive. Males bring home the “bacon” and as a consequence demand sexual exclusivity. This demand ensures genetic paternity, and then leads to stable nuclear families.

Why are baboons a good test case?

Baboons are promiscuous, but do not mate randomly (36). They have specific mating times, during estrus. Also, male baboons are on average twice as large as female baboons. The males are aggressive, strong, and have teeth that are sharper than lions’ teeth (40). Female baboons receive slash wounds about once per year (40)

For humans, this size dimorphism varies by society and historically–in many societies, human size dimorphism appears to be diminishing from earlier times in which male children received more nutrition.

What do we find about “what are friends for?”

Female choice and preference plays a huge role in mating. If we empirically define “friendship” by grooming and proximity measures (Smuts:39), we find that older males have more friends. Friendship benefits for females include protection for them and for their offspring, access to resources and primary feeding spots, and infant care (41). Interestingly, this infant care might not come from a genetically-related male, and in fact infant care is more likely from a male “friend” than from male paternity.

Male dominance is not supported

Long-term social bonds are possible without sexual division of labor or food sharing (44). Friendship between the sexes can occur without sexual exclusivity. Males can function as parents without biological paternity.

Offer clues about evolution, behavior and anatomy of most recent common ancestors. Offer clues, or parallels, to contemporary human behavior.

What do we find?

Clues: most recent common ancestor (MRCA). But keep in mind that contemporary primates have also evolved and are evolving. Chimpanzees and bonobos speciate after hominin-ape MRCA (Lavenda and Schultz 2015, 111). Primatologists “caution against taking any single primate species as a model of early human social life” (Lavenda and Schultz 2015, 100). For a great 2018 summary, see Chimpanzees Can’t Tell Us Much About Being Human by Agustin Fuentes in Sapiens.

Clues: biological and behavior parallels. But humans are not “naked apes”: have been co-evolving with tools for over two million years (Lavenda and Schultz 2015, 105).

We see species variation, diversity, and flexibility. Interesting to compare bonobos with baboons (Lavenda and Schultz 2015, 107). “I sometimes think that bonobos sit up late at night reading papers about primates, and then decide to do the opposite,” said Joan Silk, a primatologist at Arizona State University. “They’re unusual in so many ways” (In the Bonobo World, Female Camaraderie Prevails)

We see group variation and individual variation (Lavenda and Schultz 2015, 108). So when we see a film clip like Life of Mammals: Food for Thought and are tempted to exclaim “I just saw a chimp rip the head off a monkey!”…

Remember:
Those are chimpanzees. We do not see the same behavior in equidistantly related bonobos. There is group variation. This behavior is not observed across the species. There is also individual variation.

Always remember interactions with human beings. Many apes face habitat reduction and food supply issues concurrent with studies and film crews. In the last century, we are becoming more aware of large human niche construction, now known as the “Anthropocene”: “The current geological epoch wherein anthropogenic agency is one of the prominent forces affecting global landscapes and climates” (Fuentes 2012, 102 in Lavenda and Schultz 2015, 108). For this class, I considered using Naturalcultural encounters in Bali: Monkeys, Temples, Tourists, and Ethnoprimatology by Agustin Fuentes. Dr. Erin P. Riley has crucially spearheaded ethnoprimatology research. See also the 2016 Fuentes blog-post Aggression and Violence Are Possible, Not Inevitable.