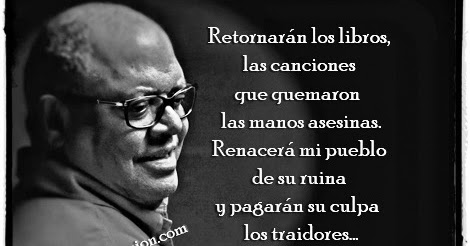 Using the textbook Anthropology of Latin America and the Caribbean, we read chapter 10, “Violence, Memory, and Justice.”

This was for the Peoples of Latin America and Caribbean 2021 course. The previous class was on “Striving for Health.” the next class was on Neoliberalism, NAFTA, Immigration.

The chapter on “Violence, Memory, and Justice” was once the conclusion of the Sanabria textbook. It speaks to some of the reasons why people from the United States and elsewhere became entangled in the struggles for justice in Latin America and the Caribbean. However, it was a pretty depressing chapter to end the book, and I was initially glad that Sanabria relocated it. But as of 2021, I am wondering if it should again be the concluding chapter.

A song to set the mood: Yo pisaré las calles nuevamente by Pablo Milanés. Lyrics and image credit to Trovadicción Radio, which is a good place to explore related songs and poetry. Some of my favorites–Mercedes Sosa, Pablo Milanés, Silvio Rodríguez.

For teaching this class again, I would consider using the article “The State” Is a Story We Tell Ourselves. This article is a much-needed update on Peruvian politics, but it also takes us back to some older theoretical material from Philip Abrams. I discussed some of this material in a 2013 blog-post Is the State Relevant? That post was a reflection on Trouillot’s chapter in Global Transformations, which urged anthropology to consider the power of “state effects” rather than simply jettison the idea in the wake of what was called “globalization.”