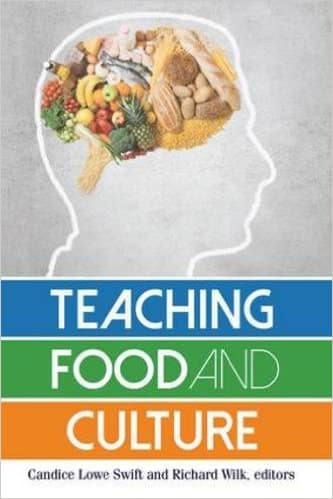 The 2016 collection of Open Anthropology focused on an anthropology of food. This issue was also a tribute to the passing of Sidney W. Mintz, known as the “father of food anthropology.”

For teaching, the University of Toronto Press published in 2018 the second edition of an overview, Eating Culture: An Anthropological Guide to Food by Gillian Crowther. The Handbook of Food and Anthropology looks strong, but was also expensive.

For food anthropology in an Introduction-to-Anthropology course, the textbook Through the Lens of Anthropology weaves food and sustainability throughout the course. See this YouTube lecture playlist for more:

Also from the anthropology blogs, an article by David Meek on Advancing Critical Food Systems Education through Service Learning and a Guest Podcast on Food Futures: Playing our Way to Conservation? Experimental Economics in the Andean Countryside at This Anthropological Life. For a 2018 update, see Antropología en la industria alimentaria: Reflexiones culinarias by Soledad Castillero Quesada. This article cites the Spanish version of Sidney Mintz, Sabor a comida, sabor a libertad.

I began my quest for Food Anthropology by reading four articles in the Annual Review of Anthropology:

I was struck by the somewhat repetitive formula: Food and XYZ. In each review, a mention that once there was not much food anthropology, but now there is an abundance. And so the combination: Food and XYZ, from which something unexpected can emerge. And in each case, a call for more or different food anthropology.

Each review also cited many sources outside of food anthropology–there is a vast literature in history, sociology, and food journalism. And each time it made me wonder: what makes food anthropology different from others who study food?

My hunch is that what makes a food anthropology distinctive is

But at the same time, I wonder if food anthropology has met the call of Mintz and Du Bois in 2002:

Much remains to be done in exploring foodways in other areas of the world. In this setting, anthropologists are in a good position to make useful contributions to the development of policy in regard to health and nutrition, food inspection, the relation of food to specific cultures, world hunger, and other subjects. By and large, though, they have not taken full advantage of this opportunity. (111)

Below is the more complete bibliography. In the end, the Open Anthropology issue was limited to articles American Anthropological Association publications.

Benson, Peter. Review of From the Farm to the Table: What All Americans Need to Know About Agriculture by Gary Holthaus. Culture, Agriculture, Food and Environment (2011).

Bonanno, Alessandro and Douglas H. Constance. Globalization, Fordism, and Post-Fordism in Agriculture and Food: A Critical Review of the Literature, Culture & Agriculture (2001).

Brewis, Alexandra A. and Amber Wutich. A World of Suffering? Biocultural Approaches to Fat Stigma in the Global Contexts of the Obesity Epidemic, Annals of Anthropological Practice (2014).

Carney, Megan A. Eating and Feeding at the Margins of the State: Barriers to Health Care for Undocumented Migrant Women and the “Clinical” Aspects of Food Assistance, Medical Anthropology Quarterly (2015).

Classen, Constance. Review of The Taste of Ethnographic Things: The Senses in Anthropology by Paul Stoller, American Ethnologist (1990).

García, María Elena. The Taste of Conquest: Colonialism, Cosmopolitics, and the Dark Side of Peru’s Gastronomic Boom, The Journal of Latin American and Caribbean Anthropology (2013).

Gewertz, Deborah and Frederick Errington. The Alimentary Forms of the Global Life: The Pacific Island Trade in Lamb and Mutton Flaps, American Anthropologist (2007).

Githinji, Valerie. Food Insecurity in Buhaya: The Cycle of Women’s Marginalization and the Spread of Poverty, Hunger, and Disease, NAPA Bulletin (2009).

Hirsch, Dafna. “Hummus is best when it is fresh and made by Arabs”: The gourmetization of hummus in Israel and the return of the repressed Arab, American Ethnologist (2011).

Hitchcock, Robert K. and Wayne A. Babchuk. Food, Health, Development, and HIV/AIDS in a Remote Area of Southern Africa, Annals of Anthropological Practice (2011).

Holtzman, Jon D. The Food of Elders, the “Ration” of Women: Brewing, Gender, and Domestic Processes among the Samburu of Northern Kenya, American Anthropologist (2001).

Holtzman, Jon D. In a cup of tea: Commodities and history among Samburu pastoralists in northern Kenya, American Ethnologist (2003).

Jasarevic, Larisa. The Thing in a Jar: Mushrooms and Ontological Speculations in Post-Yugoslavia, Cultural Anthropology (2015).

Joyce, Rosemary A. and John S. Henderson. From Feasting to Cuisine: Implications of Archaeological Research in an Early Honduran Village, American Anthropologist (2007).

Mintz, Sidney W. Review of Remembrance of Repasts: An Anthropology of Food and Memory by David E. Sutton, American Ethnologist (2003).

Mintz, Sidney W. and Jonathan T. Thomas. And the Rest Is History: A Conversation with Sidney Mintz, American Anthropologist (2014).

Ohna, Ingrid, Randi Kaarhus and Joyce Kinabo. No Meal without Ugali? Social Significance of Food and Consumption in a Tanzanian Village, Culture, Agriculture, Food and Environment (2012).

Rödlach, Alexander. “AIDS is in the Food”: Zimbabweans’ Association between Nutrition and HIV/AIDS and Their Potential for Addressing Food Insecurity and HIV/AIDS, Annals of Anthropological Practice (2011).

Roseberry, William. The Rise of Yuppie Coffees and the Reimagination of Class in the United States, American Anthropologist (1996).

Solomon, Harris. “The Taste No Chef Can Give”: Processing Street Food in Mumbai, Cultural Anthropology (2015).

Tapper, Richard and Nancy Tapper. “Eat this, it’ll do you a power of good”: food and commensality among Durrani Pashtuns, American Ethnologist (1986).

Trapp, Micah. What’s on the Table: Nutrition Programming for Refugees in the United States, NAPA Bulletin (2010).

Weaver, Lesley Jo, David Meek and Craig Hadley. Exploring the Role of Culture in the Link between Mental Health and Food Insecurity: A Case Study from Brazil, Annals of Anthropological Practice (2014).

Wiedman, Dennis. Native American embodiment of the chronicities of modernity: reservation food, diabetes, and the metabolic syndrome among the Kiowa, Comanche, and Apache, Medical Anthropology Quarterly (2012).

Wiley, Andrea S. The Breakdown of Holism: And the Curious Fate of Food Studies in Anthropology, Anthropology News (2006).

Wilson, Thomas M. Review of Around the Tuscan Table: Food, Family, and Gender in Twentieth-Century Florence by Carole M. Counihan, Journal of the Society for the Anthropology of Europe (2010).

Yates-Doerr, Emily. Does meat come from animals? A multispecies approach to classification and belonging in highland Guatemala, American Ethnologist (2015).