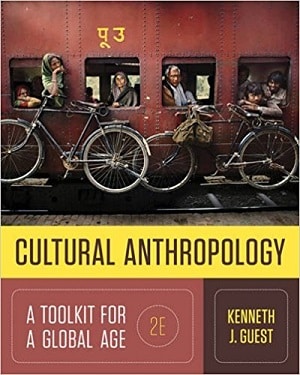 Anthropology: What Does It Mean to Be Human?, Lavenda & Schultz

Through the Lens of Anthropology, Muckle & González

In 2019-2020, I used Through the Lens of Anthropology: An Introduction to Human Evolution and Culture by Robert J. Muckle and Laura Tubelle de González. I have been impressed with the co-authors public anthropological work (they are both on Twitter). I am also a fan of the University of Toronto press and their Teaching Culture blog. The textbook is accessible, readable and not very expensive in comparison to other comprehensive textbooks. I’ve also very much appreciated their focus on Food and Sustainability as unifying themes. Getting Muckle’s perspective as a Canadian archaeologist lends a slightly less US-centric approach to the text, while González is very helpful for promoting a diversity of voices within anthropology. For a 2020 course outline, see Intro-to-Anthropology 2020.

I’ve been especially happy to have been able to develop courses in Environmental Anthropology or Cultural Ecology. From 2005, I began using Tim Ingold’s Tim Ingold’s The Perception of the Environment: Essays on Livelihood, Dwelling and Skill as the backbone of the course. I’ve put two versions of the course online, Cultural Ecology 2017 which is perhaps the most philosophical version, and Cultural Ecology 2020 which attempts to reground the material and explore issues of race and navigating the Anthropocene. Ingold’s Perception of the Environment is hardly an introductory text! However, it can function as a renewal and appreciation of some of the root issues in anthropology. Many of the issues Ingold wrote about in Perception reemerge in his 2018 Anthropology: Why It Matters.

Anthropology of Latin America & the Caribbean