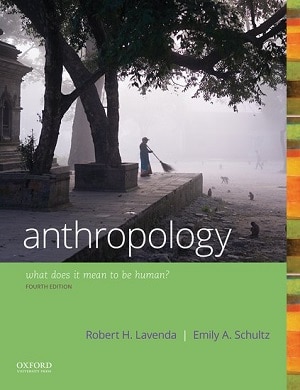 This page was an outline for an Introduction to Anthropology 2018 course, providing an anthropology definition by demonstrating contemporary anthropological findings. This definition of anthropology was based on the 4th edition of Anthropology: What Does it Mean to be Human? by Robert H. Lavenda and Emily A. Schultz, published in 2018 by Oxford University Press.

The course outline consists of three sections of 12 classes. I divided each of the 16 chapters of Lavenda and Schultz into two parts. I left the four modules as standalone. The course outline is ideal for a 14-15 week course that meets three times each week, leaving room for exams and other activities. The outline can be easily adjusted for other formats or structured for independent reading. The links in [brackets] point to related material on Living Anthropologically and notes from my Hartwick Intro-to-Anthro 2018 course. For my current approach, using a different textbook, see Intro-to-Anthropology 2020.

[For these sections, see also the content pages for Biological Anthropology]

1. What is the definition of anthropology?

2. What are the fields of anthropology?

4. How do anthropologists study evolution?

5. How is evolutionary theory evolving?

7. Why is primatology important to anthropology?

8. What type of dating method is the most accurate?

10. How did Homo sapiens evolve?

14. What role do ethics play in archaeology?

15. What is domestication (anthropology definition)?

16. What is the archaeological evidence for social complexity?

17. Why is it important to study culture?

18. Why does anthropology care about cultural relativism?

19. What does ethnographic mean?

20. What is language (anthropology definition)?

21. What is language ideology?

22. Is there meaning without context?

25. Why does anthropology study economics?

26. Can economic anthropology contribute to a more just world?

27. What is power in anthropology?

28. How does globalization affect nation-states?

29. How does anthropology study gender?

30. Is sexuality a social construct?

33. How are naturalizing discourses used?

34. If race isn’t biological then what is it?

35. What is anthropology’s contribution to public health?

36. What is the future of medical anthropology?

For a related approach to an anthropology definition, see the course outline for Intro to Anthro 2018 based on Anthropology: Asking Questions about Human Origins, Diversity, and Culture by Robert L. Welsch,‎ Luis A. Vivanco,‎ and Agustín Fuentes (Oxford University Press, 2017).

For my current approach, using a different textbook, see Intro-to-Anthropology 2020.