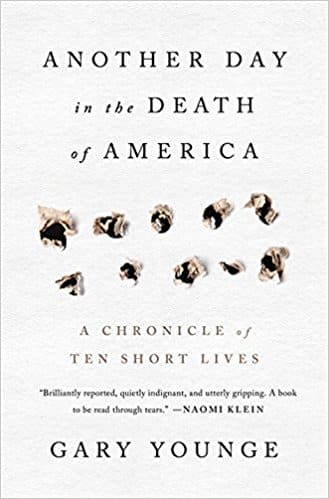 This January 2013 post thanked the American Anthropological Association for taking a stand on the horrific gun violence. In 2013, it seemed like there was still an opportunity for legislative action on gun reform. This post then became part of a series about the need for anthropology to directly address gun control and gun violence. See the gun violence index-tag. The series includes:

The U.S. hangs in legislative limbo about gun reform: national reforms proposed but with uncertain legislative chances. Some states enact gun reform laws, others increase militarization. Many people in the U.S. push for gun reform legislation, others stock up at the gun store.

This is a follow-up to the December 2012 Gun Violence Anthropology: AAA and the NRA when I lamented the lack of a statement on gun violence from the American Anthropological Association and the missed opportunity for ethnographic speculation on “preppers.” A big thank you to the American Anthropological Association for issuing the Statement on Gun Violence and to anthropologist Chad Huddleston for revisiting his ethnography, ‘Doomsday Preppers’: Our New Threat? See below for those links and more updates on gun reform anthropology.

We call upon the Congress and the Administration to rescind measures that obstruct the development of empirical knowledge about guns and public safety. Further, we call on the Congress and the Administration to make additional federal funds available, as an urgent national priority, for rigorous peer-reviewed research by experts from diverse disciplinary backgrounds to investigate ways of reducing the tragic loss of life in incidents involving guns.

Survivalism has been dragged back into the news lately with details about the ‘prepping’ done by Nancy Lanza, Adam Lanza’s mother. For many, this may have been the first time they have heard the term ‘prepping’ or ‘prepper’. Some may be familiar with the term due to the show Doomsday Preppers on NatGeo, of which Nancy Lanza was rumored to be a fan. As I read through the various stories coming out on this specific detail of the very large and complex story of the shooting in Connecticut, I was interested in tracking the creation of a discourse on this new category of possible threat–the prepper. Who are these people and should we be worried?

Update March 2018: See Chad Huddleston in Sapiens For Preppers, the Apocalypse Is Just Another Disaster for a follow-up that discusses Preppers in relationship to guns and contemporary issues.

We do not need cadres of armed guards or gun-toting principals in schools. We need instead amply staffed teams of social workers and counselors in schools—professionals who work from an educational, child-development, or mental health perspective, rather than a criminal justice paradigm. We need to invest much more in providing schools with these supports as part of reasonable and well researched, rather than reactionary and dangerous, school security plans. We also need better and more accessible mental health services in and out of schools, and we need to target gun violence at its source through strict gun control. Don’t let the reactionary, uninformed rhetoric of puffed-up politicians sway you.

Police in the Hallways: Discipline in an Urban High School, Kathleen Nolan, 2011

As zero-tolerance discipline policies have been instituted at high schools across the country, police officers are employed with increasing frequency to enforce behavior codes and maintain order, primarily at poorly performing, racially segregated urban schools. Actions that may once have sent students to the detention hall or resulted in their suspension may now introduce them to the criminal justice system. In Police in the Hallways, Kathleen Nolan explores the impact of policing and punitive disciplinary policies on the students and their educational experience. Through in-depth interviews with and observations of students, teachers, administrators, and police officers, Nolan offers a rich and nuanced account of daily life at a Bronx high school where police patrol the hallways and security and discipline fall under the jurisdiction of the NYPD. She documents how, as law enforcement officials initiate confrontations with students, small infractions often escalate into “police matters” that can lead to summonses to criminal court, arrest, and confinement in juvenile detention centers.

I’m already fatigued by folks who complain that it won’t make a difference. While I see that point, this is a huge problem and will take many years to address, why is the default response to throw up our hands as if there is nothing that can be done. Probably the most effective outcome of all of this effort is the end on the freeze on gun violence research. And discussion. The first step to addressing gun violence is talking abou it, something the NRA has tried to stop for decades. There is good reason for this: talking about gun violence makes us aware of it, and the need to stop it. That’s been the first step in making a difference drunk driving, smoking, and child sexual abuse. Wayne LaPierre should be very afraid that we’re talking, tweeting and blogging about guns. The more you know, the more likely you are to act.

One of the most profound lessons to emerge from the Newtown tragedy is the power of voice. Americans refused to cede the discussion to the N.R.A. and other gun interests. They refused to buckle to fear or be swayed by propaganda. Yet too many politicians still quake at the mere mention of the N.R.A. They are more interested in protecting their jobs than protecting society. The public must make them quake at the idea of doing nothing on this issue. We must never forget what happened in Connecticut last month and we must never forget what happens in Washington in the coming months. The tragedy of Newtown must herald the dawn of a new America.