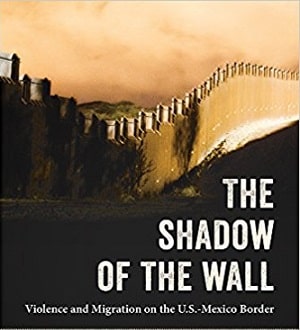 Update: As seen in The Shadow of the Wall, the issue of how anthropology counters the attacks on migrants and refugees in the United States has only become more pressing. Unfortunately so far in 2021, even the heralded Biden-Harris agenda on immigration has not yielded policy changes. My most recent attempt to teach about immigration is the 2021 Neoliberalism, NAFTA, Immigration using the textbook Anthropology of Latin America and the Caribbean:

In 2011 the American Anthropological Association (AAA) issued a General Statement on Immigration. This 2011 statement was a testimony to a need for rethinking immigration policy and legislation at a time when it appeared political representatives were capable of working out a legislative compromise.

Issuing this statement was one of the reasons the AAA was able to quickly respond in 2017 and call for an Immediate Reversal of Executive Order Banning Immigrants. The AAA declared Phasing Out DACA is a Grave Injustice. And in 2018, the AAA insisted that “protection of the ‘DREAMers’ be reinstituted indefinitely and without exception.” Moreover, a revamped Members’ Programmatic Advisory and Advocacy Committee declared it would be prioritizing DACA for 2018.

But legislation stalled. The US Immigration and Customs Enforcement previewed US fascism for undocumented migrants. As Michelle Goldberg wrote in First They Came for the Migrants: “We still talk about American fascism as a looming threat, something that could happen if we’re not vigilant. But for undocumented immigrants, it’s already here. . . . What is happening is the sort of moral enormity that once seemed unthinkable in contemporary America.”

As US anthropologists, whose very founding is enmeshed with immigration, we needed to figure out how to do more. In 2018 Transgender Latina Activism in the Current Political Moment, Andrea Bolivar offered guidance: “Such models draw from trans Latina strategies that are diverse in expression and approach and have developed over decades, and even centuries, of struggle against grave injustice. Focusing on the persistence and resistance of trans Latinas is valuable to all who seek change in the current political moment.”

Also in 2018, the AAA issued another strong statement, AAA Rejects Separating Immigrant Children From Their Parents as Mean-Spirited Political Ploy:

Anthropological scholarship sheds light on many of the issues central to comprehensive immigration reform and extensively documents the value of family unification. Based on our scholarly expertise and the lived experience of both anthropologists and the communities with whom they live and work, the AAA recently offered its Principles For Equitable and Effective Immigration Policy Reform in the US, which includes “adequate and consistent protections for the integrity of families and family groups throughout the immigration process,” and a “sensitivity to the human costs of displacement and the division of families.”

The AAA policy and statements take us back to one of the founding fathers of US Anthropology: Franz Boas. Boas was an immigrant, and published some of anthropology’s most important work to shatter racial stereotyping based on measurements of immigrants:

American anthropology has a long history of scientific interest in and professional concern for immigrant populations. For example, Franz Boas, the founding father of American anthropology, wrote and spoke extensively on erroneous beliefs, anchored in pseudoscience, that immigrants in the early twentieth century from Southern and Eastern Europe were genetically inferior. A century of anthropological research on immigration and host society responses to immigration shows that immigration tends to be driven by economic deprivation and political persecution, that first generation immigrants are frequently stereotyped in inaccurate and demeaning ways, that scapegoating of immigrants escalates in times of economic contraction (the degree of scapegoating being roughly proportionate to the degree of economic contraction), and that anti-immigrant campaigns tend to be premised on erroneous factual claims and predictions.

American anthropology has a long history of scientific interest in and professional concern for immigrant populations.Click To Tweet
Many Introduction to Anthropology classes discuss the importance of Boas. There is a clear contemporary connection to politics and anthropology on immigration.

The AAA policy statements are also important in the context of Josiah Heyman’s work, Finding a Moral Heart for U.S. Immigration Policy: An Anthropological Perspective which is published by the AAA. Heyman’s “moral heart” pushes us to capture the moral optimism of anthropology. Also check out the 2017 edited volume The U.S.-Mexico Transborder Region: Cultural Dynamics and Historical Interactions

Although many people push a narrative of enormous separation between “legal” immigrants and “illegal” immigrants, the experiences of most immigrants historically is tremendously complicated. Fluctuations in laws have made those distinctions quite arbitrary, as immigrants often find themselves on either side of the legal/illegal line with changing circumstances. The current immigration system is capricious and irrational, making the legal/illegal distinction mostly a refuge for an anti-immigrant posture.

This is also something Josiah Heyman has written about and compiled in his edited volume States and Illegal Practices. State practice has an interest in drawing lines between the official and the unofficial, the legal and the illegal, the legitimate and the criminal. Anthropology needs to draw attention to how those lines are socially constructed and maintained, often disguising very similar practices.