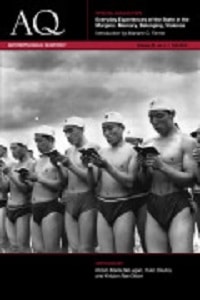 Update: This post from 2013 was part of a series that attempted to blog through Michel-Rolph Trouillot’s Global Transformations: Anthropology and the Modern World for Cultural Anthropology, while responding to current events. For an update about an anthropology of the state and politics, see the 2020 YouTube lecture based on the textbook Essentials of Cultural Anthropology:

Anthropology of the State during Globalization

Michel-Rolph Trouillot’s chapter on “The Anthropology of the State in the Age of Globalization,” a re-working of an article that appeared in Current Anthropology is a call to renew anthropological investigation of the state. For Trouillot, we should be wary of seeing the state as something out there, or as equivalent to national government. Instead we need to be attuned to state effects:

If the state is a set of practices and processes and the effects they produce as much as a way to look at them, we need to track down these practices, processes, and effects whether or not they coalesce around the central sites of national governments. In the age of globalization state practices, functions and effects increasingly obtain in sites other than the national but that never fully bypass the national order. The challenge for anthropologists is to study these practices, functions and effects without prejudice about sites or forms of encounters. (2003:89)

Anthropology of the State vs. the Violence Counters

Although Trouillot’s essay was influential within anthropology, the idea of tracing state effects as processes and practices, not necessarily confined to national government apparatus, seems to be even less heeded today. Jared Diamond’s violence tallies, in alliance with Steven Pinker’s statistical fetish, rely almost entirely on very simplistic distinctions between “state societies” and “non-state societies.” If you see a government, call it a state society and count the numbers. If you don’t–and for Jared Diamond on the Colbert Report this includes contemporary ranchers in Montana, people in Papua New Guinea, and urban neighborhoods in Washington, D.C.–call it a non-state or “traditional” society and equate it with lifeways prior to agriculture or prior to the state.

Perhaps in part because anthropology has not done enough to trace state effects, we have also said too little about such claims. The HAU Journal of Ethnographic Theory had an open-access issue on “The G-Factor of Anthropology: Archaeologies of Kin(g)ship,” but as became more obvious in 2018, the journal had almost no connection to popular-sphere debates. More surprisingly, even as the excellent anthropologies project aims at the public, the 2013 issue on Anthropology & War had no mention of Pinker or Diamond. In both cases, a central message from anthropology, “that one cannot measure governmental power on a continuum” (Trouillot 2003:86) underpins excellent research but could be more directly engaged with debates external to anthropology.

Another area in which an anthropology of the state may matter is to counter prevailing ideas that states are by nature inefficient, markets by nature efficient. Anthropologists have often, with reason, been suspicious of state claims. Trouillot draws on one of the most famous critiques, James Scott’s Seeing like a State: How Certain Schemes to Improve the Human Condition Have Failed. However, as I argued in Anthropology and Government Planning, we need to be very careful that such suspicion does not validate narratives of political helplessness. A better understanding of state effects is necessary if we hope to coalesce around anthropologically-informed understandings of gun reform or immigration reform.

The first state effect Trouillot identifies, drawing on Nikos Poulantzas, is an “isolation effect” which “produces atomized, individualized citizens who all appear to be equal within a supposedly undifferentiated public sphere. . . . Thus the isolation effect separates individuals from the very social history that produced them as distinct individuals in the first place” (2003:89). This isolation effect is quite relevant to the kinds of consumer interactions Elizabeth Chin describes in Purchasing Power–the notion that all become equal in the consumer sphere.

The isolation effect also contributes to diminish responses which call for state intervention, in alliance with the ideas of government inefficiency mentioned above. So even though wealth disparities have changed in complex ways, the notion persists that these are all the results of individual choices (see Social Construction of Race, Conservative Goldmine). Or even if it is not just individual choice, the state is portrayed as powerless to address such issues: “The new construction of state powerlessness relative to private efficiency–which one must insist is a political choice–eases the transfer of jurisdiction and responsibilities” (2003:86). Indeed, it was striking that movements like Occupy Wall Street did not seem to directly address state projects.

Anthropology, the State, and the Citizen

In a powerful 2013 lecture at Hartwick College titled “The Legacy of 19th Century Slave Emancipation for the Modern World,” historian Thomas Holt drew attention to the 1793 Guadeloupe revolt of enslaved blacks. When confronted by soldiers and asked to identify themselves, the blacks replied “Citizens and friends!” (See Laurent Dubois’s A Colony of Citizens: Revolution & Slave Emancipation in the French Caribbean, 1787-1804.)

Holt challenged us to guard against new forms of slavery in our midst, and that to confront a vast informal economy, we need to reimagine our national spaces of citizenship. Indeed, it is most necessary, during a time when the idea of independent nation is revealed as no longer utopia, that we re-examine the notion of citizen, friend, and identification:

Government institutions and practices are to be studied, of course, and we can deplore that anthropology has not contributed enough to their study. However, anthropologists are best suited to study the state from below through ethnographies that center on the subject produced by state effects and processes. We may have to look for these processes and effects in sites less obvious than those of institutionalized politics and established bureaucracies. We may have to insist on encounters not immediately transparent, and we must further insist that our colleagues in other disciplines recognize their importance. We may indeed have to revert to the seemingly timeless banality of daily life. (Trouillot 2003:95)

Anthropology of the State Updates

November 2013: As I was writing this, was e-mailed a notice regarding the just-released issue of Anthropological Quarterly, Special Collection: Everyday Experiences of the State in the Margins: Memory, Belonging, Violence. An interesting and timely connection.

November 2013: See James C. Scott’s review of The World until Yesterday for an analysis of state effects and violence:

There is plenty of violence in the world of hunter-gatherers, though it is hardly illuminated by resorting to statistical comparisons between the mortality rates of a tiny tribal war in Kalimantan and the Battle of the Somme or the Holocaust. This violence, however, is almost entirely a state-effect. It simply cannot be understood historically from 4000 BC forward apart from the appetite of states for trade goods, slaves and precious ores, any more than the contemporary threat to remote indigenous groups can be understood apart from the appetite of capitalism and the modern state for rare minerals, hydroelectric sites, plantation crops and timber on the lands of these peoples.

As Alex Golub notes in Read James Scott’s review of Jared Diamond, this review echoes my own perspective and concerns in Jared Diamond, Science, Violence & the Facts.

This post from 2013 was part of a series that attempted to blog through Michel-Rolph Trouillot’s Global Transformations: Anthropology and the Modern World for Cultural Anthropology, while responding to current events. For an update about an anthropology of the state and politics, see the 2020 YouTube lecture based on the textbook Essentials of Cultural Anthropology: