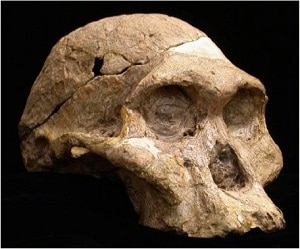 Nicholas Wade featured australopithecine teeth in the June 2011 Teeth of Human Ancestors Hold Clues to Their Family Life. As is so often the case, Wade’s reporting was quite troubling.

For excellent australopithecine teeth analysis from both science and the media, see Rosemary Joyce’s blog-post, I want a cave man, I want a brave man. I asked Joyce about Wade. For several reasons she deliberately excluded his story from her post. Joyce later tackled Wade in a 2011 blog-post for Psychology Today, I’m an Apeman, I’m an Ape Ape Man. This latter post includes some of my comments.

Joyce notes one reason she excluded Wade was because he used this story to recycle material he had written in the March 2011 Supremacy of a Social Network. That article contained controversial and dated assumptions about both non-human primates and hunter-gatherers. In his current piece, Wade repeats the assumptions: “The joint ancestor of chimps and humans lived about five million years ago and is often assumed to have had a chimplike social structure, with a male hierarchy, promiscuous mating by the females and all-out war between neighboring bands.”

Wade has obviously not heard that bonobos could be considered equally ancestral. Nor is the idea of “all-out war” accepted by observers of chimp societies. Human intervention and habitat loss can intensify violent activities.

I write about related issues in So Many Primates for Primatology and Stone Tools for 2+ Million Years. It is annoying to keep reiterating these themes, but anthropology needs to speak on these matters. One of the comments on Joyce’s Psychology Today post said, “The problem with cultural anthropology is that it always looks for difference and is aversive to the commonality of human nature, which is ever more ascendant in science across disciplines.”

I say this is the strength of anthropology! We must stand against this so-called science. Anthropology is Necessary!