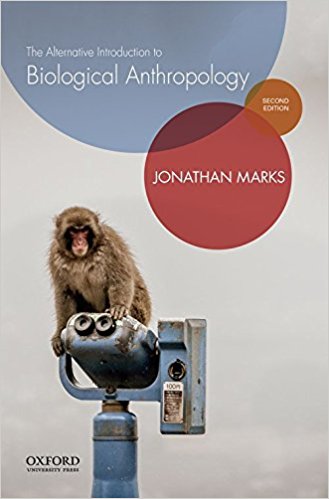 Those looking to teach and learn Biological Anthropology as a textbook-free course can consult Dr. Holly Dunsworth’s fall 2020 Textbook-free Introduction to Human Origins and Evolution as a great resource.

I have two preferred textbooks specifically for biological anthropology. There is the 2017 2nd edition of The Alternative Introduction to Biological Anthropology by Jonathan Marks. For a somewhat more traditional textbook approach, there is The Human Species: An Introduction to Biological Anthropology by John Relethford. For an accessible and popularly-written book, see Race, Monogamy, and Other Lies They Told You: Busting Myths about Human Nature (Agustín Fuentes 2012).

The sections below are also available on Amazon as a Kindle eBook, Anthropology I: Human Nature, Race, Evolution. However, I have been unable to update the Kindle edition since 2012-2013.

Anthropology’s search for human nature emphasized shared capacities in particular cultures. But humans are always in process–there is no human nature.

Darwin wrote of “descent with modification.” Evolution and natural selection describe natural processes, but there are potential problems with these terms.

To understand human evolution, from hominin species classification to Denisovan debates, it is essential to understand biological anthropology and racism.

Human head shape is considerably plastic–there is no natural or genetically-determined head shape. The Boas head shape studies have been revalidated.

Anthropology successfully debunked race, but we now see race revival, from “A Family Tree in Every Gene” to attacking anthropology. How did this happen?

Anthropology reveals how race becomes biology, intertwining social categories and biology. This is dynamic and developing biology, not genetic determinism.

Primates vary by species, group, and individually. Primatology reveals there is no single primate behavior pattern at the base of human evolution.

Habitual bipedalism–not big brains–differentiated hominid ancestors from apes. But walking is a learned behavior, not easily explained by selection.

Stone tools date to 2.5million years ago, yet direct ape-to-human comparisons persist. As Jonathan Marks comments: “We evolved, get over it.”

Were Denisovans and Neandertals ancestors of modern humans? Different species? Or sub-species, like races? Anthropology shows porous species and admixture.

Human biologies are biocultural platforms of possibility. Anthropology reveals the naturenurtural of humanity rather than determining genes and instincts.

After that, it’s on to Archaeology