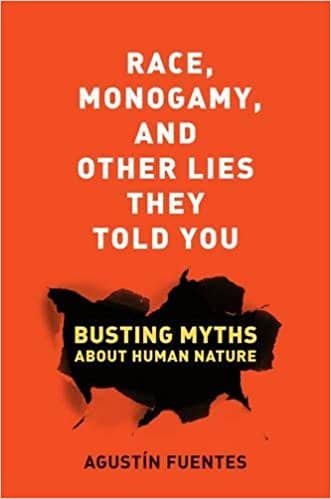 In 2012, biocultural anthropology got a big boost from the Agustín Fuentes book for popular audiences Race, Monogamy, and Other Lies They Told You: Busting Myths about Human Nature and Jonathan Marks, The biological myth of human evolution. With Fuentes reorienting our attention to the “naturenurtural,” these works were a potentially tremendous help in Intro-to-Anthropology. For my own 2021 attempt to summarize a human biocultural naturenurtural evolution, see this YouTube lecture:

Marks conducts a careful review of the scientific and academic literature. Marks dispatches with truly unscientific approaches and sets an agenda for future biocultural research:

To try and represent humans as non-cultural beings is a fool’s errand, the residuum of a pre-modern scientific approach to understanding the human condition. This is itself simply an instance of a deeper and broader myth, that humans are scientifically understandable independently of culture–either your own or that of your remote ancestors. To begin the study of humans by imagining that you could free yourself or your object of study from culture, then, would be as regressively anti-intellectual a proposition as any that comes from a modern creationist or climate change denier. Modern studies of human evolution are engagements with the biocultural; the determinism may be weaker, and the interpretative elements may be self-consciously more evident, but we no longer pretend that we are Martians, or that our subjects are automatons. We are humans studying human ancestry and diversity, and there are few, if any, precedents in the history or diversity of life to guide us. (Marks 2012:154)

'To try and represent humans as non-cultural beings is a fool’s errand, the residuum of a pre-modern scientific approach to understanding the human condition' (Jonathan Marks).Click To Tweet
Fuentes summarizes the research but aims his book squarely at popular understandings. Fuentes coins the term naturenurtural to describe human beings, and provides a myth-busting toolkit to dismantle commonly-held dictums. Together, Marks and Fuentes provide a one-two punch of a truly scientific and academic research agenda coupled to popular presentation and public engagement. (See also the thoughts on a Fuentes lecture version of his book, or Fuentes as Anthropology 101.)

Since 2012, both Fuentes and Marks have been very active in building on this agenda. Fuentes joined the textbook authors Welsch and Vivanco to produce Anthropology: Asking Questions about Human Origins, Diversity, and Culture; see my Intro to Anthro 2018 course outline that builds from this textbook. Marks produced the Alternative Introduction to Biological Anthropology which is now in its second edition. And Fuentes was chair for the 2017 conference Anthropology Matters.

From the biological to the naturenurtural

People come to biological anthropology, primatology, and human evolution expecting to find human nature: determining structures, or a suite of genes and instincts programming human behavior. Instead we find a biocultural platform of possibility, the naturenurtural. Biology primes us for plasticity and incorporating learned behavior.

There are at least four dimensions of possibility that should always be kept in mind:

Human biology cannot be specified outside of a particular environment and the particular activities of development. Maternal environment, food, shelter, and activity shape body form, and even head shape and skeletal development. Genes help set processes in motion and regulate the parameters of those processes, but they are not blueprints or programs, in the usual deterministic sense of those terms. A good Introduction to Anthropology article to illustrate this plasticity is Barry Bogin’s “The Tall and the Short of It” (1998) in the 2012 edition of the four-field Applying Anthropology: An Introductory Reader.

There have been some popular attempts to re-claim genes for the nurture side–perhaps the most prominent is Matt Ridley’s The Agile Gene: How Nature Turns on Nurture. Ridley writes:

It is genes that allow the human mind to learn, to remember, to imitate, to imprint, to absorb culture, and to express instincts. Genes are not puppet masters or blueprints. Nor are they just the carriers of heredity. They are active during life; they switch each other on and off; they respond to the environment. They may direct the construction of the body and brain in the womb, but then they set about dismantling and rebuilding what they have made almost at once–in response to experience. They are both cause and consequence of our actions. Somehow the adherents of the “nurture” side of the argument have scared themselves silly at the power and inevitability of genes and missed the greatest lesson of all: the genes are on their side. (Ridley 2004:6)

I am sympathetic to Ridley’s attempt to restore genes to the nurture side. However, genes are so associated with determinism that efforts to re-characterize the term gene are probably doomed. And it’s not simply that the nurture side has “scared themselves silly”–it’s that genes were mistakenly promoted as program and blueprint from the beginning (see Lily E. Kay, Who Wrote the Book of Life?: A History of the Genetic Code; for a 2013 update see Fuentes in PopAnth, Behaviour evolves, but evolution is a lot more than ‘survival of the fittest’).

Documented evidence for hominid stone tool use goes back over million years ago. That’s a long time to be evolving with tools. This is especially true considering the findings that even recent adaptations, like agriculture, can result in genetic change.

But evolution does not only occur at the genetic level. Humans have a uniquely long history of co-evolving with tools and durably transforming the landscape. Humans are not the only tool-using animals, nor the only organisms to transform the landscape, but humans have quite thoroughly altered the conditions of selection and evolutionary processes through learned behavior. “Through contributing to the environmental conditions of development for successor generations organisms–including human beings–actively participate in their own evolution” (Ingold 2000:292).

Not everyone is ready to accept the claim that bipedalism demonstrates how learned behavior becomes biologically incorporated. However, it offers a glimpse into a time 6-8million-years ago when something humans learn–walking–became a defining characteristic of humanity.

Similarly, as children grow and learn in a particular environment, engaged in particular activities, those activities become part of their developing musculature. Whether this is weaving baskets or playing the piano, stalking game or riding bicycles, each organism grows in a specific way. “These skills, then, far from being added on to a preformed body, actually grow with it. In that regard they are fully part and parcel of the human organism, of its neurology, musculature, even anatomy, and so are as much biological as cultural” Ingold 2000:360).

This apparently new insight to Brooks is an ancient truth for anthropology, emphasized by a host of anthropologists dating back over a hundred years. The linguist Lev Vygotsky, writing in the 1920s, put it nicely: “The social dimension of consciousness is primary in time and in fact. The individual dimension of consciousness is derivative and secondary” (cited in Lavenda and Schultz 2012:268).

Recent years have seen popular books emphasize social conditions and human possibility rather than determinism. Outliers by Malcolm Gladwell and Talent Is Overrated by Geoff Colvin emphasize social conditions and focused practice over talent and genetic destiny. However, these books retain the classic distinction between individual and society. They become self-help books: if only you put in your 10,000 hours of focused practice, you too could be an “outlier” or “world-class performer.”

Anthropology, in contrast, emphasizes biological potential as a social possibility, and how individual plasticity reinforces social influences. These possibilities are not always positive–capacity for cruelty and social systems of vast inequalities are also part of the suite of human possibility. Human nature contains neither altruism nor cruelty: it is rather up to us to fulfill human promise.

It is high time we recognised that our humanity, far from having been set for all time as an evolutionary legacy from our hunter-gatherer past, is something that we have continually to work at, and for which we alone must bear the responsibility.
–Tim Ingold, Against Human Nature (2006:280)

This insight from Tim Ingold is a great way to conclude the reflections on biological anthropology, human nature, evolution and race–as a transition to talking about gathering and hunting and agriculture. Or, was agriculture the “Worst Mistake in the History of the Human Race”?”

Next: 2.1 – Agriculture as “Worst Mistake in the History of the Human Race”?”