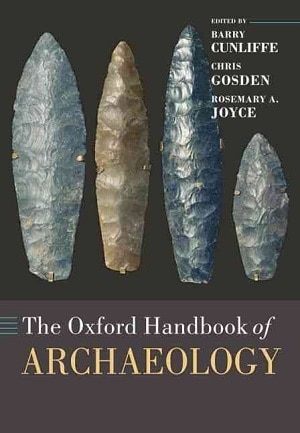 Update: This page on stone tools was written in 2011 as an example of stone tools as coevolution. For a lecture on the subject using the textbook Anthropology: What does it mean to be human? see the 2021 Intro-to-Anthropology class:

After Jane Goodall discovered chimpanzees fashioning twigs into tools for termite-fishing, her mentor Louis Leakey sent a famous telegram: “Now we must redefine tool, redefine man, or accept chimpanzees as human.” Of course, as Jonathan Marks writes about Leakey’s telegram, “actually none of these alternatives is necessary–we simply have to avoid confusing the attributes of species for definitions of species” (The Nature of Humanness 2009:238). And in 2016 when we saw Wild Monkeys Flaking Stones in a way that is difficult to distinguish from ancient stone tools, there’s a lot of confusion to avoid!

Nevertheless, since the time of Goodall more non-human primate tool use has been documented. Hardly anyone talks about “man-the-tool-user” anymore. But wild non-human primates do not make anything as durable as stone tools. In contrast, as of 2015 there is evidence of hominids chipping and flaking stone tools as early as 3.3 million years ago. As much as we can admire the skills of our non-human primate relatives, as much as we can see similarities, as much as we can imagine this transition, it is nevertheless extremely important to convey for an Introduction to Anthropology how long hominids and humans have been co-evolving with tools and learned behavior.

For 2+ million years hominid species have been experimenting with tools, shelters, hunting techniques, gathering implements, weapons. For 2+ million years hominids have been cooperating, communicating, thinking, reckoning kinship. This is not to compare along lines of better-or-worse: there will always be advantages and disadvantages to any tool set, and evolution is not a progressive march. Nevertheless, hominid species and humans became different from apes.

We have evolved into biocultural ex-apes.

Pre-Darwinian scholars of the Enlightenment tried to imagine a noncultural human condition, but we now know that we have been coevolving simply with stone tools for over 2.5 million years. Consequently, the quest to imagine a human condition without culture is simply the tortured dream of a hack philosophe. . . .

To imagine that we are nothing but apes, and to find human nature there, actually constitutes a denial of evolution. We evolved; get over it. . . . Evolution is the production of difference and novelty, and you are not your ancestors. (Off Human Nature, Marks 2010:513)

This may all seem a silly point. Of course humans are not apes. Of course 2+ million years is a long time. But it is a surprisingly durable misconception in public perception and scholarly work.

In the 2011 article titled Supremacy of a Social Network, New York Times reporter Nicholas Wade claims contemporary “chimp societies are a reasonably good stand-in for the ancestral ape society that gave rise to the chimp and human lineages” (Wade 2011). He then writes “living hunter-gatherers may reflect those of long ago, since humans always lived this way until the first settled societies of 15,000 years ago.” He then poses as a problem that “the two species’ social structure could scarcely be more different. . . . How did a chimplike society ever give rise to the egalitarian, largely monogamous structure of hunter-gatherer groups?”

The assertion that contemporary chimp societies can automatically stand-in for the ancestral apes of 6-8 million years ago is highly dubious (see section So Many Primates for Primatology). Which contemporary chimp society should we choose? There are differences in behavior observed in different chimp groups, as well as differences with bonobos, who have an equal claim to standing in for the ancestral apes. Moreover, all of these ape populations have been evolving for 6-8 million years. As Robert N. Proctor put it, “the historicity of nonhuman primate culture remains remarkably undertheorized and underresearched” (Proctor 2003:215).

The idea that living hunter-gatherers can stand in for millions of years of hominid evolution is even more ludicrous (see section Many Ways of Gathering and Hunting). Contemporary gatherers and hunters are extremely diverse, and there is every reason to believe they have always been extremely diverse. Moreover, any gathering-and-hunting pattern has been evolving for potentially hundreds of thousands of years. There is no evidence that anything like the gathering and hunting societies observable today could have emerged before at least 2+ million years ago. That is already 3-4 million years after the split between the common ancestral lines leading to contemporary apes and contemporary humans.

But let’s put those points aside for a moment and simply consider the final puzzle. Let’s just juxtapose ape societies with hunter-gatherers: why should it be a great mystery how they became so different? There were millions of years between them! As Marks says, “we evolved, get over it.”

Of course we want to research how and why hominid differences develop. Of course we want to know about tool use, speech and communication, kinship reckonings, how different gathering and hunting techniques emerged, forms of cooperation, weaponry, social group distinction. But let’s not conjure up great and mysterious leaps, gulfs, or watershed moments. Two-plus million years is a long time to be evolving, especially as hominid populations began co-evolving with tools.

Next: 1.11 – Denisovans and Neandertals as Human Races