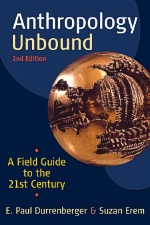 A big thank-you to all those who have read, tweeted, recommended, shared, commented-on, and blogged about the Anthropology, Moral Optimism, and Capitalism: A Four-Field Manifesto. I have a lot more work to do on that, but as an immediate follow-up, please see the free PowerPoint download Anthropology and Moral Optimism. It’s a version of something I’ve used in Anthropology 101 courses, and is fully customizable. Many textbooks have a final chapter on the uses of anthropology and the future of humanity, so it fits in well as a course re-cap. Happy for suggestions or comments.

In an e-mail, E. Paul Durrenberger reminded me of Anthropology Unbound: A Field Guide to the 21st Century, a textbook he writes with Suzan Erem. This is a choice worth considering for those wishing to specifically tackle these issues in an anthropology course:

Anthropology Unbound: A Field Guide to the 21st Century, Third Edition, demonstrates how viewing the world through an anthropological lens enhances our understanding of current topics like globalization, the new economy, jobs and careers, world trade, the condition of inner cities, and racial and ethnic relations. It makes anthropology accessible and even fun, with examples from “driving the porcelain bus” as an illustration of negative utility to reading the tags on a classmate’s shirt as a way to discuss why it was made in another country.

The original post has had three lives, first circulating in the very kind anthropology-blog world, and then getting some write-up and shares from other disciplinary allies and activists. I was grateful for write-ups from Jason Baird Jackson, UVicAnthro, #OCCUPYIRTHEORY, and Rust Belt Philosophy (among others). The post then had a third life when it was picked up by The Browser and two Reddit entries, Reddit1 and Reddit2, which brought many more visitors but also made clear how much work has to be done to bring certain kinds of anthropology into a wider orbit. My favorite tweet from that phase: “A paean to anthropology-as-policy, the most pompously funny piece you’ll read today.” To be fair, I was deliberately copying language from the Communist Manifesto, so I suppose pompously funny is part of the genre. But I wanted it to be the most pompously funny piece you’ll read all year…

Update 12 November 2011: The original post is now on Reddit for a third time, but is so far better liked in the Anthropology thread. It’s curious how on Reddit this was posted first elsewhere before then being posted in anthropology.

More seriously, I’m grateful for some of the more extended commentary, as it outlines exactly the places that need development and elaboration. I’ll hope to do that–I’m also hoping to get YouTube videos started–but it’s going to take some time.

Related news from the AAA

The AAA has updated their Free Speech Anthropology Forum so that it highlights the most recent issues AAA-member anthropologists have been blogging about. I requested updates and reorganization, as that forum seemed focused more on Bin Laden than more recent events. Joslyn O. was extremely helpful, quickly updating and moving things around. She says she would like more links. So, please send things along, and thank you Joslyn!

This method of intensive research into the social relations of a single commodity has a deep anthropological history. Sidney W. Mintz used this to great effect in his Sweetness and Power: The Place of Sugar in Modern History and taught a graduate seminar which asked students to research a single crop or commodity.

Denisovans hit the news again with headlines like More people have Denisovan genes than thought and Asians, too, mated with archaic humans, DNA hints, based on a paper in PNAS, Archaic human ancestry in East Asia. John Hawks provides a customarily trenchant analysis, with some words of caution, in How widespread is Denisovan ancestry today? Still, a preliminary takeaway point from Hawks: “This paper provides the suggestion of a more widespread Denisovan legacy, and I accept that as a possibility.”

I find some relief in these headlines and studies, as they seem to support the points I was making in It’s admixture all the way down. East Asian admixture results may slow down some of the racist interpretations filtering around about the native inhabitants of New Guinea and Australia. I also appreciated the reflections at the Torso and Oblong blog, Talking about Modern and Ancient Peoples. Here, Dalton Luther refers to Hawks and my post to use a great metaphor and image: a braided river.

Dalton Luther traces the braided river metaphor to Kroeber, but it does seem to come from his more recent source, John Moore, even as Kroeber had some similar thoughts but stuck to complicated trees. John Edward Terrell  discusses this, quoting Kroeber, Linton and then “Recently, John Moore offered yet a third image of the past, the ‘braided river channel,’ to make the same point that a strict biological (i.e. genetic) tree showing human history as a monophyletic branching off from a common trunk does not work well as a way of representing our history and diversity” (Archaeology, Language, and History: Essays on Culture and Ethnicity, p.4).

I like the braided river a lot–I’m not sure how different this is from Franz Weidenreich’s interconnected trellis or a more rhizome-like model (see Denisovans and Neandertals as human races), but the overall point is of complexity and interrelation.

An earlier version of this post included a comment about the AAA Anthropology in Media Award. However, I have recently been contacted by a journalist at the Chronicle of Higher Education about this comment. I am removing it. Here is the message I sent to the journalist:

My point was mainly to say that these are times when anthropology as a whole should emphasize non-deterministic approaches, and there are an array of anthropologists who are doing exactly that in the media, although they don’t always get highlighted.

However, I would be reluctant to comment further because I am really not too familiar with Dr. Fisher’s work and based my questions more on some select media comments. I was also very dismayed with the Chronicle’s coverage of the AAA meetings last year, Anthropologists look for bridges across a divided discipline (by David Glenn). I attended that panel and found it not at all representative of the vibrancy and bridge-building which characterized the meetings and anthropology generally. I would definitely not want to make this into a bigger issue than it is, and don’t want to let one award get in the way of what promises to be an exciting intellectual exchange. This part of my blog-post has received almost no comment, on or off list.

I’m very wary of falling into a recurring theme for 2010-2011, of Anthropology, Ambushed.