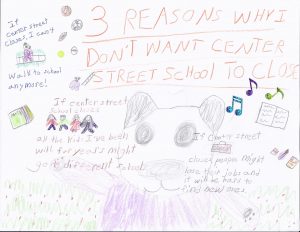 In 2011 our school superintendent talked about our educational choices as not being able to afford the Cadillac but instead getting a Taurus. You know you are in trouble when your educational choices are all about U.S. automobile brands from the 1980s. Probably not a sign of forward-looking thinking. Meanwhile, our state senator was running push polls promoting caps on property taxes and asking us to choose between the priorities of jobs or same-sex marriage. It was not a good time for a “Saving Schools” attempt.

That kind of framing led directly to the planned closure of our central neighborhood school. For a projected savings of one million dollars, I predicted the following results:

I write as someone who is very personally concerned with these issues–two kids in elementary school, and having bought a house precisely to be able to walk to schools and the downtown. And I cribbed my reasons from my daughter’s drawing above. This plan is far from a done deal, and I would urge anyone in the area to check out the Facebook group Support Oneonta Schools and Closing a school is a problem–not a solution.

The general issue is larger–it’s about the false economy of choices based solely on short-term budgets and political expediency. It’s about re-framing these issues in terms of a human economy. And we need to again realize that a discourse reducing all choices to economics, markets, and budgets “may not be the most respectful of the planet we share, nor indeed the most accurate nor the most practical. We owe it to ourselves to say that it is not the most beautiful nor the most optimistic” (Trouillot, Global Transformations, p.139).