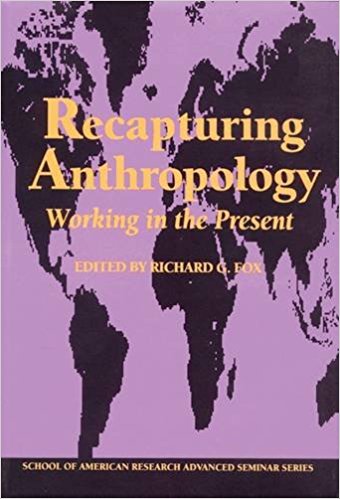 “Anthropology and the Savage Slot” by Michel-Rolph Trouillot brilliantly framed the emergence of academic anthropology within a wider field of inquiry spurred during the rise of Western ideas. The essay originally appeared in the 1991 volume Recapturing Anthropology: Working in the Present. Trouillot revised and rewrote the essay as the first chapter of Global Transformations.

This page was originally part of my Cultural Anthropology 2016 course and represents over 20 years of attempting to understand Trouillot’s message. Revisiting these notes in 2020 helped me to finally conclude that Trouillot’s agenda had come to an impasse: it was a missed opportunity for anthropology. Or, as described by Jonathan Rosa and Yarimar Bonilla in Deprovincializing Trump, decolonizing diversity, and unsettling anthropology: “As the discipline failed to reinvent itself and find a new purpose beyond the ‘savage slot,’ it also failed to find relevance in public debates” (2017, 205). And so in 2020, I also attempted to revise the Purpose of Living Anthropologically. Given these developments, it is hardly surprising that we need to re-ask the question Is anthropology more important than ever?

One of the most important points of “Anthropology and the Savage Slot” was to recapture the historical events that preceded the formation of anthropology as an academic discipline. To accomplish this, we need to understand how Europe came to see itself as Christian and as “the West”:

From the point of view of contemporaries, the most important event of the year 1492 was not Columbus’s landing in the Antilles, but the conquest of the Muslim kingdom of Granada and its incorporation into Castile. . . . To put it simply, as Christendom became Europe, Europe itself became Christian. It is no accident that the fall of Muslim Granada was immediately followed by the expulsion of the Jews from the now Christian territory. It is no accident either that the very same individual who signed the public order against the Jews also signed Ferdinand and Isabella’s secret instructions to Columbus. (Trouillot 2003, 20)

The establishment of the Spanish and Portuguese Empires (roughly from 1500-1800) set up a template of conquest and colonialism which long preceded any anthropologists. When Trouillot discussed “Anthropology and the Savage Slot,” the 1400-1600 Renaissance period is crucial. The key point here was that anthropology “inherited a field of significance that preceded its formalization” (9). The “Savage Slot” was not created by anthropology. Rather, the “savage or the primitive was the alter ego the West constructed for itself” (18). Moreover, the Savage was always a “Janus-faced projection,” linked with ideas of order and utopia.


The 'Savage Slot' was not created by anthropology. Rather, the 'savage or the primitive was the alter ego the West constructed for itself' (Trouillot 2003, 18)Click To Tweet
Update 2022: I still try to explain the ideas of the Savage Slot in Intro-to-Anthropology. See this video lecture for an attempt:


Versions of the Savage Slot

There are several different versions of the Savage Slot that appear in intellectual and popular culture. Often these versions are mirror images: thus very easily interchangeable. One version is that people outside the West share a common human nature. In this formation, they were like us, we improved, and they could become us (Trouillot 2003, 21). As Trouillot indicated, these views of possible common human improvement tended to align with ideas that “history was going somewhere” (12-13), or that we were all on the same human trajectory.

A third version of the Savage Slot is the idea of “The Noble Savage” (Trouillot 2003, 14). This is an idea that anthropologists are often accused of espousing, but the idea long precedes anthropology.

Where does anthropology come in?

Trouillot made the case that as anthropology emerged as a formal academic discipline, it stepped into a much longer history and discursive field. Anthropology would become concerned with defining and delivering the spectacle of the Other (Trouillot 2003, 19). Anthropology would also seek to separate several genres which had previously featured significant overlap: utopian accounts, ethnographies, and travel writings (17-18). Anthropology became a “curiosity turned profession” (18).

As Trouillot put it, at least for most anthropologists, “the rest of the story [of how anthropology was established] is well known, perhaps too well known” (2003, 18). Anthropology became the social science version of: What about everyone else outside of the West (19)? As anthropology emerged, two prevalent explanations were environmental determinism and racial determinism (See Race and Culture 2020 for my most recent attempt to explain these concepts in Intro-to-Anthropology). That these explanations could arise were in part because after hundreds of years of colonialism, “the Savage became absence and negation” (22). Nevertheless, arguments about “the Savage” were always still caught up in arguments for or against utopia and for or against certain forms of political order (22)

What about American (US) Anthropology?

In US anthropology, “Indians (especially ‘good’ Indians) became the preserve of anthropologists” (Trouillot 2003, 18). But it is important to keep in mind that “what happens within the slot is neither doomed nor inconsequential” (23). This is where people like Franz Boas and Ruth Benedict introduce the anthropological concept of culture to wider audiences.

Interestingly, the purpose of Boasian anthropology was not so much to document cultural tradition but to call tradition into question. In the 1938 “An Anthropologist’s Credo” in The Nation, Boas wrote of the “shackles of tradition”: “In fact, my whole outlook upon social life is determined by the question: how can we recognize the shackles that tradition has laid upon us? For when we recognize them, we are also able to break them.” Which is certainly a curious statement since most people believe they come to Cultural Anthropology to study culture and traditions!

In the 1990s, “Anthropology and the Savage Slot” was Trouillot writing in the midst of what seemed a devastating self-critique (Trouillot 2003, 24). In retrospect, it is interesting that Trouillot anticipated the selfie, or “the anthropological selfie”: “It’s pouring rain out there, and the mosquitoes are starting to bite. In desperation, the baffled anthropologist burns his notes to create a moment of light, moves his face against the flame, closes his eyes and, hands grasping the camera, takes a picture of himself” (24).

Trouillot urged us to turn to history and outward. Instead of turning toward inward representations, anthropologists were to “address the thematic field (and thus the larger world)” (28). Trouillot very explicitly stated that for anthropology–in 1991!–“the direction of the discipline now depends upon an explicit attack on [the Savage] slot itself and the symbolic order upon which it is premised” (23). However, it is important to note that Trouillot was not talking about attacking savage slots within anthropology. He was asking anthropologists to make a concerted effort to address the world outside of anthropology. [See the guest post on Teaching Trouillot for thoughts on Trouillot in a graduate seminar, although again this tactic aims at a select anthropological audience.]

How did that work out?

It is perhaps safe to say that since 2000, the Savage Slot staged the biggest comeback ever in the wider world. Most of the comeback was in bad-evil-savage form (especially seen in the premises of the “War on Terror”). Around 2012, the idea that only the state could curtail savage violence became dominant. Sometimes the renderings did return in good-noble-savage form, perhaps most notably in some strains of environmentalism.

In the US political scene of 2018, we saw various Savage Slots playing out in the debates about immigration. On the one hand, Trump and the emboldened white nationalists double down on the idea of “illegals” ridden with murderous crime. On the other, DACA recipients become “dreamers” who hold the future of all that is noble and good.

Meanwhile, although anthropologists issued a statement on immigration and amazing research on immigration, anthropology’s influence was (at best) muted. Jason De León wrote the amazing Land of Open Graves–which is a wonderful dismantling of “Savage Slot” stereotypes regarding border migrants–but there is little evidence that anthropology affected perceptions or policy. Michel-Rolph Trouillot was a brilliant Haitian anthropologist, but perceptions of Haiti were drowned out by belligerent denigration.

Since 2000, the notion that “history is going somewhere” in some senses increased. Coca-Cola and iPhones proliferated. But for many populations, the notion of progress decreased: “Maybe world history was going nowhere” (Trouillot 2003, 13). Many populations now inhabit the ruins of capitalism.

In 2016, anthropologists continued to insist that Cultural Anthropology is the Most Important Class that Any Undergraduate Will Take. And some anthropologists asked Would Margaret Mead tweet? But there was never a systematic effort to confront the Savage Slot and its symbolic system outside of anthropology. Perhaps this was due to the fact that even as anthropology attempted to develop a public-web-blog presence, it remained so incredibly white, with a collection of white anthropology blogs.

Since 2020, it is telling that the very blog-post which insisted “Cultural Anthropology is the Most Important Class that Any Undergraduate Will Take” has disappeared, and like some other influential anthropology blogs of the time, it is available only in the Internet Wayback Machine. The Savage Minds blog-post that asked about Margaret Mead has become Anthrodendum, with no discernible extension of impact and influence. In some ways, the anthropology blogosphere is best persisting via the Wenner-Gren blog project Sapiens, which unfortunately shares a title with one of the biggest Savage Slot revival books of our time.

So yeah, back to what Jonathan Rosa and Yarimar Bonilla wrote in Deprovincializing Trump, decolonizing diversity, and unsettling anthropology: “As the discipline failed to reinvent itself and find a new purpose beyond the ‘savage slot,’ it also failed to find relevance in public debates” (2017, 205). Therefore, it is hardly surprising that we need to re-ask the question Is anthropology more important than ever?

The notes above and initial Disqus comments below are from the Hartwick College course in Cultural Anthropology 2016. For using Trouillot in a graduate seminar, see the guest post on Teaching Trouillot. I still try to explain the ideas of the Savage Slot in Intro-to-Anthropology. See this video lecture for my 2022 attempt: