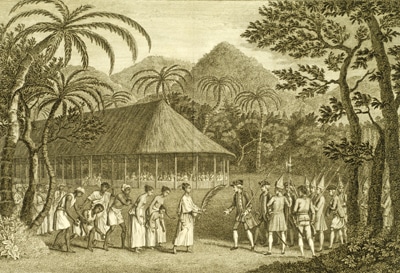 The discussion began with “Anthropology and the Savage Slot,” then proceeded to “Asking Questions About Humanity.” Rough notes:

Chapter One as Missed Opportunity

1. Should begin with Colonialism and properly periodize & define it
2. Should then discuss Industrialization in the context of the Caribbean
3. Then Evolution makes sense as way to explain & justify #1 & #2

The language of these people, according to our notions, scarcely deserves to be called articulate. . . . We have no reason to believe that they perform any sort of religious worship. . . . The different tribes have no government or chief. . . . They cannot know the feeling of having a home, and still less that of domestic affection. . . . Their skill in some respects may be compared to the instinct of animals, for it is not improved by experience. (Charles Darwin, The Voyage of the Beagle 1831-1836, [2001:183, 191-2])

[Here my argument echoes what I wrote in How Did Anthropology Begin? about the longer textbook version of Welsch & Vivanco] 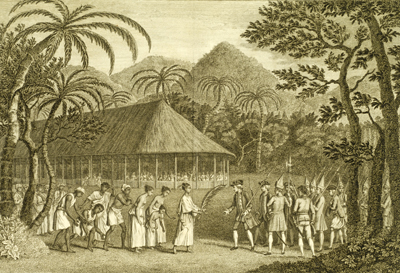 Image Titled: “A Representation of the Surrender of the Island of Otaheite to Captain Wallis by the Supposed Queen Oberea.” Plate no. 22 [i.e., 23], from vol. 1 of Hawkesworth’s An Account of the Voyages Undertaken by the Order of His Present Majesty for Making Discoveries in the Southern Hemisphere . . . (London, 1773). [Rare Books Division] see Samuel Wallis, 1728–1795 / Philip Carteret, d. 1796