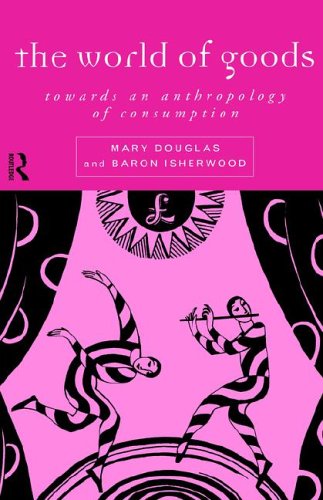 To begin talking about “consumption in context” we returned to Michel-Rolph Trouillot’s idea of having a list of products. We related this idea to a section on “Why Does Having Some Things Make You Cool?” (Welsch and Vivanco, 136-137).

We then talked about what I call “coffee table anthropology.” This exercise is a deliberate attempt to judge books by their covers. Or, put differently, to ask what people might be trying to say about themselves if they put out the book on a coffee table. For the purposes of beginning Chin’s book, I asked what students thought when they bought the books for the course? How did Chin’s book compare to the others?

I claim that Chin’s title is deliberately disruptive, especially with where we expect the word “culture” to occur. If we re-phrase Chin’s title in what is thought to be stereotypical of anthropology, it would be something more like: African American Youth Culture and American Consumerism. (I’ve talked about Chin’s displacement of the word culture for thinking about the idea of “gun culture.”)

What is Chin Trying to Say?

Anthropologists need to launch our ideas into the world and aim at a wider audience, perhaps even provoke that audience. Chin questions biological fixity of race. She sees Black/White not as cultures or subcultures, but as entering consumer culture on unequal terms. Chin needs anthropology to understand race and to provide empirical details of fieldwork. But we can’t just do anthropology in a vacuum. We must talk to a wider society. Or as Trouillot puts it, anthropology will only matter if it invokes a purpose outside of itself.

What do we expect from Barbies?

We expect the girls to want black Barbies, and to complain about that lack. Instead we find that they bring dolls into their world. And that for them the “whiteness” of the dolls is not the primary issue.

Whoa, where did all this anthropology come from?

Or, how do our myths about poor consumers echo the “Savage Slot”?

Bourdieu on how culture & history become natural and “taken for granted” (see Welsch and Vivanco, 29). How culture shapes the economic choices we perceive as rational. Put differently, both substantivist and formalist approaches are correct (Welsch and Vivanco, 128-129).

In Bourdieu’s language, the conditions of life create aspirations so that “the most improbable practices are excluded… as unthinkable, or at the cost of the double negation which inclines agents to make a virtue of necessity, that is, to refuse what is anyway refused and to love the inevitable” (Bourdieu 1977, 77).

Must clear out our cobwebs about consumption

One huge cobweb: Needs & Wants. The line between needs and wants is difficult to define. It is also a slippery slope. Needs are socially constructed (Chin, 51). This is a classic move in anthropology. Anthropology demonstrates that what seems to be inevitable, natural, needed is actually part of our culture and society.

Who decides a need or want under slavery?

Slave-owner defines (Chin, 37). Provide scraps for food. For clothing, 1-2 pairs per year. Clothing becomes an extremely important marker of dignity (40). There are similar themes today (43). What are the differential consequences of “looking poor”? Or see The Logic of Stupid Poor People.

This was a perfect place to think about Chin’s next chapter, What Are You Looking At, You White People?