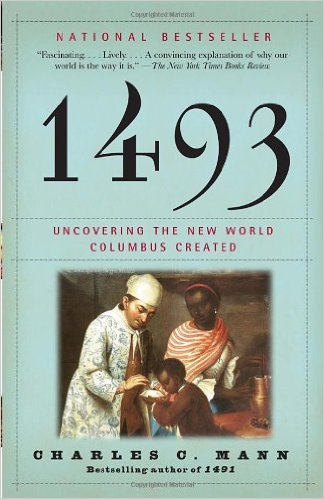 This is definitely a complex reading and the lectures covered some of the material previously posted as Globalization Stories: Systematic Erasure of Continuous Encounters.

Class began with Bob Marley’s Buffalo Soldier as a way of talking about how power never arrives directly. In the same sense, many of the commodities and people mobilized by these global flows would not have been experienced as a direct mandate from the North Atlantic powers. We also briefly discussed how Bob Marley has been appropriated as a “mellow out” theme, when Marley himself often espoused Confrontation and Uprising.

Then the question of “Why?” and “So what?” Why read such difficult material?:

Or as Trouillot puts it:

As a discipline, we have launched the most sustained critique of the specific proposals rooted in these universals within academe. Yet we have not explored enough how much these universals set the terms of the debate and restricted the range of possible responses. In the context of this much-needed reformulation, the Caribbean’s most important lesson is a formidable one, indeed. That lesson, as I see it, is that modernity never was–never could be–what it claims to be. (2003:46)

Similarly with regard to the issue of immigration, raised in the Disqus comment stream. Does the relativizing message of anthropology hold any weight? I argued that in fact a stance from anthropology seems to have a negative impact, in that people refuse to accept that anthropologists should have anything to say about contemporary politics and are therefore more likely to discount rather than accept anthropological findings. [I am hoping to later post segments from this class in video form.]

After that, drew out on a map the many global flows, and brought in material on From Silver to Cocaine: Latin American Commodity Chains and the Building of the World Economy, 1500–2000 regarding how the US dollar was once backed by Mexican silver peso, which also explains the curious expression of “two bits” being the same as $0.25.

Then on to how despite all those flows, the world is imagined as blocks of countries or blocks of cultures, colliding, so that it becomes possible to imagine borders with fences.

Finally, began talking about Baudelaire and the idea of Love at Last Sight, but how in fact Trouillot talks about how Caribbean slavery was already a modern enterprise:

If modernity is also the production of individual selves through patterns of production and consumption, Caribbean slaves were modern, having internalized ideals of individual betterment through work, ownership, and personal identification with particular commodities. It was a strained and harsh modernity, to be sure. Otherwise modern they were; yet still undoubtedly modern by that definition. (2003:43)