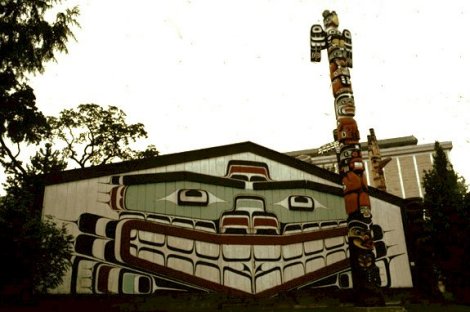 This was the comment page for “The Northwest Coast of America” (chapter 6) in Ruth Benedict’s Patterns of Culture for Cultural Anthropology 2016. As with the previous chapter on Dobu, we thought about if “culture” is the best explanation. After all, where did they get all those blankets for potlatch?

“A couple of generations ago, before white intervention, they were cannibals” (Benedict:131)

Were the ancient Pueblos cannibals?

Recent analyses of prehistoric multiple inhumation in Anasazi sites in the American Southwest have argued that cannibalism best explains evidence of defleshing, cutting, and bone breakage. The validity of this explanation is questioned in a review of ethnohistoric and ethnographic literature on Pueblo witchcraft and witch execution. A model based on Puebloan procedures for witch destruction is offered which accounts for osteological patterning in the archaeological record . . . (Darling 1998)

Was anyone a cannibal?

Yes, but accounts of cannibals have often been misinterpreted or exaggerated. Obeyesekere’s Cannibal Talk: The Man-Eating Myth and Human Sacrifice in the South Seasargues that it becomes a self-fulfilling prophecy.

Why were Europeans so obsessed?

Avramescu’s An Intellectual History of Cannibalism traces it to birth of idea of European modernity, separating self from other, idea of Natural Law, and Greek texts.
But review by Obeyesekere says Avramescu misses some crucial points about ongoing fascination, not just an intellectual history (as is perhaps evident in the Disqus comment thread below as well as the Amazon reviews of Avramescu compared to Obeyesekere).

Does Benedict reify her examples?

“consider an abstract concept to be real” (WordNet)
“to regard something abstract as if it were a concrete material thing” (Wiktionary)
Reification: concept –> thing
Culture, for Boas and first part of Benedict:
Attribute of humanity
The way we become human, a process
Anti-concept
Later in Benedict’s introduction, Culture –> cultures (46, 50)
From the “cultural island” (129) of the Pueblos to the real island of Dobu

How do you know a reification when you see one?