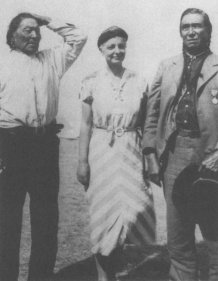 The Pueblos of New Mexico

This is the comment page for “The Pueblos of New Mexico” (chapter 4, pp.57-129) in Ruth Benedict’s Patterns of Culture for Hartwick College students in Cultural Anthropology 2016. Before the reading, posed these questions:

In future readings, I would include Our Laboratory of Anthrolocura by Aimee Villarreal and David F. García in Anthropology News (July 2018).

The Pueblos of New Mexico: Who are they?

Benedict:78-80 is the crucial “thesis statement” Benedict uses to organize the ethnographic material

For contemporary examples of rituals, see The Perennial Power of Ritual (2016) in Sapiens.

What is Benedict trying to say?

“The trouble with life isn’t that there is no answer, it’s that there are so many answers” (see Ruth Benedict in the Vassar Encyclopedia)

They have made, in one small but long-established cultural island in North America, a civilization whose forms are dictated by the typical choices of the Apollonian, all of whose delight is in formality and whose way of life is the way of measure and of sobriety. (Benedict 1934:129)