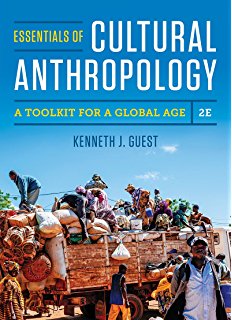 In my Cultural Anthropology courses for 2018-2019, I adopted a package of books by Kenneth J. Guest:

This approach is a significant departure from my 2016 course in Cultural Anthropology. That course concentrated on reading full-length anthropology books as we traced the trajectory of the concept of culture within and outside of anthropology. While there was much that was useful about that course, finding our way in what Guest calls “a Global Age” means concentrating on the contemporary anthropological toolkit. We of course want to remember global history and the history of anthropology, but I feel we need to foreground the future, especially in a basic undergraduate class.

A. The Culture Toolkit