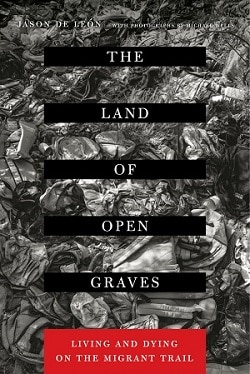 I began Cultural Anthropology 2019 with an excerpt from The Land of Open Graves by Jason De León. The excerpt was in the Reader for a Global Age. De León’s chapter featured prescient analysis of border emergencies, concentration camps, and the relationship between nationality and humanity. We read this for Cultural Anthropology 2019. This class also set the stage for the next class on Peripheries.

In 2019, one of the most useful ideas from The Land of Open Graves excerpt was a “state of exception”:

Agamben’s state of exception–the process whereby sovereign authorities declare emergencies in order to suspend the legal protections afforded to individuals while simultaneously unleashing the power of the state upon them–is a particularly salient concept for those working on the margins of nation-states. (De León, 10)

It was almost uncanny to realize how relevant De León (and Agamben) had been at diagnosing the ginned-up 2019 “emergencies” about immigration. For a related approach, see Immigration panic: how the west fell for manufactured rage (thanks to Discuss White Privilege for the link).

Similarly and eerily prescient were the passages about concentration camps:

Like Agamben’s characterization of the concentration camp, the spatial arrangement of borders often allows a space to exist outside the bounds of normal state or moral law. . . . This space can be policed in ways that would be deemed violent, cruel, or irrational in most other contexts. Just imagine how people would react if the corpses of undocumented Latinos were left to rot on the ninth hole of the local golf course or if their sun-bleached skulls were piled up in the parking lot of the neighborhood McDonald’s. (De León, 11)

De León uses a particularly salient phrase: “Americans today have no problem putting nationality before humanity” (10). In class, we used this phrase to reflect on all the other identities that people have put before or above humanity. Students listed: Religion; Political Power; Economic Gain; Race; Sexual Orientation; Ethnicity; Gender. And these are exactly the topics we cover in the course and in Guest’s textbook! (See Cultural Anthropology 2020 for the most recent course outline.)

Part of the purpose of anthropology is to analyze these relationships. How do we define humanity? How and why are other identities able to subsume our common humanity? Anthropology must be unwavering in its analysis of these powerful relationships.

At the same time, anthropology needs to offer a gentle reminder that really humanity should be before nationality. And race. And religion. Etc. But you don’t need to be an anthropologist to understand that. As Alberto Cortez and Facundo Cabral introduce “No soy de aquí”:

As someone who teaches on Latin America, I did bristle a bit at De León’s use of “Americans” in the phrase above. After all:

More Material on “The Land of Open Graves”

I once taught De León’s entire book in Introduction to Anthropology 2016. It did not sway the election results. I had better luck in 2020 with the immigration policies of Biden-Harris, although of course people are trying to make the border into an “emergency” and create another “state of exception.”

For student Disqus comments below, students were asked to address either of these questions:

For a 2021 update on the issues of immigration using the textbook Anthropology of Latin America and the Caribbean see: