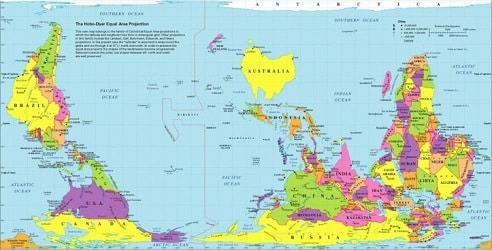 Using the Reader for a Global Age for Cultural Anthropology 2019, this class focused on the idea of peripheries. Following from the first class on Jason De León and ideas of Humanity/Nationality, we read “There Are No Peripheries to Humanity” by Edith Turner (1921-2016) and an excerpt from Behold the Black Caiman by Lucas Bessire.

Anthropologists in the Peripheries

[Image credit: Decolonial Atlas]
My original intent in pairing these two selections was to demonstrate how anthropologists had studied in the peripheries and demonstrate two different ways of thinking about those peripheries. As anthropology began as an academic discipline, anthropologists were people who went to places that academics in North America and Europe did not consider worth studying. Anthropologists studied with people who were peripheral, left out, and in the case of Turner’s article, very much dumped on. Eventually, Turner’s title claim that “There are no peripheries to humanity!” became a kind of rallying cry for doing anthropology. As Turner writes, “the peripheries of the planet will not do for dumping harmful garbage, because people live there” (31).

Similarly put, anthropologist Michel-Rolph Trouillot wrote that “the tradition of [anthropology] has long claimed that the fate of no human group can be irrelevant to humankind” (Global Transformations 2003, 138; see the blog-post titled We cannot abandon humanity.)


'the tradition of anthropology has long claimed that the fate of no human group can be irrelevant to humankind.' --Michel-Rolph TrouillotClick To Tweet
Interestingly, Bessire’s excerpt demonstrates that such attitudes are not simply held by academics or by powerful Northern urban elites. These attitudes spread and recapitulate within the periphery, so that in Bessire’s account, “one rancher told me he could always tell when the savages were near, because the dogs acted up like they smelled a wildcat or a storm” (63). Now a rancher in the South American Chaco is (probably) hardly someone participating in an international elite network. Yet even though he is himself would very much be considered peripheral to urban elites, his attitudes viscerally reproduce racist stereotypes about so-called savages and primitives. Peripheries are always shifting and relative.

I was also happy that student comments pushed me to connect to the material in the previous class on Humanity/Nationality. In that class we discussed how people have been willing to put various identities before or above humanity. In this case, both readings are a testament to how much people have been willing to elevate ideas of “progress” or “development” above the humanity of other groups.

At first glance, Bessire’s excerpt appears to be in the same spirit: an anthropologist studying a peripheral and marginalized people, insisting upon their importance. However, Bessire is also questioning the flip side of the stories about evil savages. Ideas of people in the periphery are also often romanticized; isolation is valued and lauded. The idea of a Noble Savage is very much part of what anthropology inherits and traffics in: The Savage Slot. Bessire becomes “increasingly convinced that primitivist narratives of culture death were not any kind of answer at all. Rather, they were part of the problem” (61)

In this excerpt, Bessire briefly mentions Eric Wolf’s critique of the “pool hall model of the world” (66). Bessire develops this further in his book, but for the class excerpt I believed it was worth turning to the original quote:

The point is more than academic. By turning names into things we create false models of reality. By endowing nations, societies or cultures with the qualities of internally homogeneous and externally distinctive bounded objects, we create a model of the world as a global pool hall in which the entities spin off each other like so many hard and round billiard balls. (Europe and the People Without History 1982, 6)

Of course, Wolf’s quote is very much about the dangers of reification, or turning concepts into things. But it is more generally about a larger set of claims in anthropology: We are all interconnected; We co-produce each other; There are no isolates. Eric Wolf’s book was a magnificent and magisterial effort to uncover the linkages that made the modern world possible. “The central assertion of this book is that the world of humankind constitutes a manifold, a totality of interconnected processes, and inquiries that disassemble this totality into bits and then fail to reassemble it falsify reality” (1982, 3).


'the world of humankind constitutes a manifold, a totality of interconnected processes' (Eric Wolf)Click To Tweet
What this means is that the anthropological rallying cry of “There are no peripheries to humanity!” is not just a moral claim. It is an empirical claim, based on anthropologists studying in the peripheries and demonstrating how vital and central those peripheries have been to world history (see also Sidney Mintz’s work on sugar, slavery and capitalism).

For class comments, I ask students to make connections between the readings and present-day events. Several students discussed the fires in the Amazon. These seemed indeed very relevant, especially since in 2019 Trump’s Trade War Could be Fueling Amazon Fires. Although there will surely be a raging political debate about whether such a claim is technically true, the larger point was this: our actions can very much affect far-off others. The world is an interconnected manifold, and there are no peripheries to humanity.

Finally, to return to the point about ideas of “progress” being put above humanity, it seems that in previous times, the fates of various groups were considered a necessary sacrifice to a larger story about human progress and development. These groups were seen as expendable in order to serve a greater good. However, it is becoming increasingly obvious that ideas of progress and development may potentially threaten humanity itself.

Student comments below addressed the question Kenneth Guest posed: “Why does Turner call her article ‘There are no peripheries to humanity?'” (2018, 31).

For more on Edith Turner’s life and contribution, see Edith Turner and the Anthropology of Collective Joy by Paul Stoller (2018):

In the end, Edie’s notion of collective joy is a tonic for contemporary social life. It is a model for reaching our students and extending to the public our important insights about social life. Her joy of living the anthropological life is a model for being well in the world — a model that can bring us a measure of comfort as we confront the imponderables of our turbulent times.