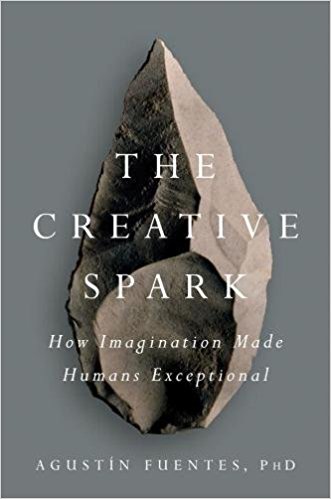 For my Cultural Ecology 2017 course, we consider questions about the future of life in the Anthropocene. One big question: Are Humans Intelligent?

To address the question of “Are Humans Intelligent?” there were two readings:

Ingold’s chapter on “The poetics of tool-use” posits an alternative answer to the question of “Are Humans Intelligent?” For Ingold:

There are, then, words, and activities that people do with words (i.e. speaking). And there are tools, and activities that people do with tools (i.e. tool-using). But is there language? Or technology? What is entailed in the assumption that for people to speak they must first “have” language, or for people to use tools they must first “have” technology–or indeed for people to engage in intelligent activities of any kind they must first “have” intelligence? If, on the other hand, we drop the assumption, what further need do we have of these concepts? Suppose, to pursue my alternative claim, that we set ourselves the task of examining the relation, in human evolution, not between technology, language and intelligence, but between craftsmanship, song and imagination. The resulting account, I suspect, would be very different. (2000:407)

At the end of the chapter, Ingold sets out the differences between imagination and intelligence. Although imagining takes us away from the current of our activities, Ingold stresses that imagining is something we do, a part of being in the world. It is a skill.

Here, then, we have the final, essential difference between intelligence and imagination. The former is the capacity of a being whose existence is wrapped up within a world of puzzles, the latter is the activity of a being whose puzzle-solving is carried on within the context of involvement in a real world of persons, objects and relations. And of all the historical products of the human imagination, perhaps the most decisive and far-reaching has been the idea that there exists such a thing as an “intelligence,” installed in the heads of each and every one of us, and that is ultimately responsible for our activities. (2000:418-419)

We aren’t built to live in the moment?

In May 2017, Meredith Small’s blog-post A Head for the Future points the way to a New York Times article We Aren’t Built to Live in the Moment by Martin E.P. Seligman and John Tierney. Seligman and Tierney claim that “what best distinguishes our species is an ability that scientists are just beginning to appreciate: We contemplate the future.”

Interestingly, the word “intelligence” does not appear in the article. But there are 12 instances of imagine or imagining. So in fact, we can imagine a role for anthropology and Ingold’s preliminary sketch of imagination.

Or, we can wonder if Agustin Fuentes’s 2017 book The Creative Spark: How Imagination Made Humans Exceptional got scooped. Why aren’t Seligman and Tierney collaborating with (or at least citing) Fuentes? I received an answer by Twitter from Fuentes: “Sigh. Seligman and Tierney don’t seem to use the anthro lit. They propose Homo prospectus–too simplistic. I try to do better in my book.” (See also my 2012 blog-post on Empathy and Science.)

In a running theme for Ingold’s book, he here again discusses the idea (from Gibson) of an “education of attention”:

This kind of learning exemplifies what Lave (1990: 310) has called ‘understanding in practice’, to which she counterposes ‘the culture of acquisition’. The latter phrase denotes the theory of learning long favoured by cognitive science (and by Western educational institutions), according to which effective action in the world depends on the practitioner’s first having acquired a body of knowledge in the form of rules and schemata for constructing it. Learning, the process of acquisition, is thus separated from doing, the application of acquired knowledge. It is implied, moreover, that a body of context-free, propositional knowledge – namely a technology or, more generally, a culture – actually exists as such and is available for transmission by teaching outside the context of use. Learning, in this view, entails an internalisation of collective representations or, in a word, enculturation. ‘Understanding in practice’, by contrast, is a process of enskilment, in which learning is inseparable from doing, and in which both are embedded in the context of a practical engagement in the world – that is, in dwelling. According to this theory of learning, the kind of know-how thus gained, ‘constituted in the settings of practice, based on rich expectations generated over time about its shape, is the site of the most powerful knowledgeability of people in the lived-in world’ (Lave 1990: 323). (Ingold 2000:416)

In an interesting extension of Ingold’s work, see Danny Naveh’s “Social and Epistemological Dimensions of Learning Among Nayaka Hunter-Gatherers” in Social Learning and Innovation in Contemporary Hunter-Gatherers: Evolutionary and Ethnographic Perspectives (2016). Matthew Gwynfryn Thomas and Djuke Veldhuis discuss Naveh’s work in What If Machines Could Learn the Way Children Do? in Sapiens (March 2018).

These latter articles to the discussion of Will machines replace humans? And Ingold’s work here could be seen as prefatory to what he later develops in Anthropology and/as Education (see What is Anthropology?)

If reading this helps you understand the issues around the idea of “intelligence,” please use a social share button or make a $1 contribution to keep anthropology resources online, updated, accessible. Thanks!