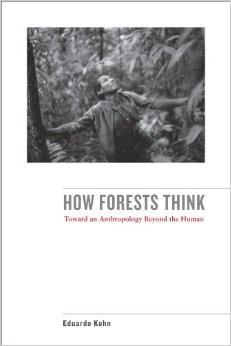 For Cultural Ecology 2017, we read Ingold chapter 6, “A circumpolar night’s dream” in The Perception of the Environment: Essays on Livelihood, Dwelling and Skill. We also began reading Eduardo Kohn’s How Forests Think: Toward an Anthropology Beyond the Human. In the comments below, I focus on the issue of how these authors consider persons and personhood in relationship to non-human animals, comparing that to some anthropology bloggers from 2017-2018.

One of the most interesting things about the Ingold chapter–and very much related to Kohn’s opening thoughts–has to do with the idea of a person. From Ingold:

Persons, in the Ojibwa world, can take a great variety of forms, of which the human is just one. . . . Though persons may appear in animal form, not all animals are persons. One can usually tell if an animal is a person, because its behaviour will be out of the ordinary. But some animals are always extraordinary. One such is the bear. The hunter, on encountering a bear, will act towards it as a person who can understand what is being said and will respond according to its own volition (OO, p. 36). There is nothing in the least anthropomorphic about this. The hunter is not regarding the bear as if it were human. To the contrary, it is perceived to be unequivocally ursine. Unlike the pet in a Western society, the personhood of the bear does not depend upon its previous contacts with humans – indeed it need not have had any such contacts at all. For the same reason, the bear is just as much a ‘full person’ as is the human hunter. Ojibwa relate to persons in animal form as grown-ups, not as children. And whereas anthropomorphised animal-persons in the West are treated as beings that need to be looked after and controlled by their human guardians, the animal-persons in the environment of the Ojibwa are considered to be on the same level as, if not more powerful than, human beings themselves. (91-92)

I quote at length to compare to a 2018 blog-post by Adam P. Johnson, on The Personhood and Rights of Apes. Johnson has a great set of bibliographic references, but I think he needs to sort out the distinction between person, human-person, and animal-person. In this sense, we could have human-persons as well as ape-persons. Both are persons but of different types. And while human rights are for humans, there are also ape rights for apes.

See Studies in Skyrim: Werewolf? Therewolf! Can We Find Lycanthropy in Archaeology?