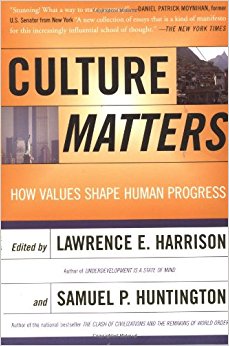 The Scene of Culture Matters

Culture Matters was the result of a conference sponsored by Lawrence Harrison and Samuel Huntington, the Huntington who brought us The Clash of Civilizations. Out of 24 pieces discussing how much culture matters, there are exactly three anthropologists.

The subtitle of Culture Matters is “how values shape human progress.” The thesis is nicely summarized in a particularly obnoxious piece by David Brooks written shortly after Haiti’s devastating 2010 earthquake:

As Lawrence E. Harrison explained in his book “The Central Liberal Truth,” Haiti, like most of the world’s poorest nations, suffers from a complex web of progress-resistant cultural influences. There is the influence of the voodoo religion, which spreads the message that life is capricious and planning futile. There are high levels of social mistrust. Responsibility is often not internalized. Child-rearing practices often involve neglect in the early years and harsh retribution when kids hit 9 or 10.

We’re all supposed to politely respect each other’s cultures. But some cultures are more progress-resistant than others, and a horrible tragedy was just exacerbated by one of them. (Brooks 2010, The underlying tragedy)

Brooks was simply cribbing from things Harrison had said long before the earthquake. Michel-Rolph Trouillot had already pointed out and tried to refute this false narrativge. “Culture Matters echoes arguments that Harrison makes elsewhere about Nicaragua and notably Haiti–where he was a USAID official–and the woes of which he blames on ‘Vodoo politics’ and ‘the imprint of African culture'” (Global Transformations 2003:144; see Haiti’s Nightmare and the Lessons of History from 1994 and The Headline I Wish We Were Reading: Anthropology Changed Everything for an update).

Samuel Martinez correctly faulted Brooks for “attacking Haiti precisely at its culture, the one area where it is generally understood to be ‘rich'” (“Tough love,” hold the love and see also David Brooks: Worse than Pat Robertson?). However, Martinez and others went apoplectic in a way that really only resonated with the anthropological community. Somewhat ironically, one of the most effective rebuttals came from the old master of Caribbean studies, Sidney Mintz: “The inescapable truth is that ‘the world’ never forgave Haiti for its revolution, because the slaves freed themselves” (Whitewashing Haiti’s History). However, just like in Culture Matters, none of the anthropological critique got heard at the same volume as the original pronouncements.

The anthropologists in Culture Matters

The three anthropologists in Culture Matters were shoehorned into a single section titled “The Anthropological Debate,” a section guaranteed to remain irrelevant to the overall scope of the project–let’s put the anthropologists over here and let them debate among themselves. First came Robert B. Edgerton, who was happy to recap his Sick Societies: “There has been no perfect society and no ideal adaptation–only degrees of imperfection” (2000:138).

The counterpoint to Edgerton, and the only openly skeptical voice in this collection, is Richard Shweder. Shweder called himself “one of the heretics at this revival meeting” (2000:161). Shweder delivered a rousing defense of cultural relativism. His chapter was the only one in the volume to then get reactions printed from three of the conference participants, who accuse Shweder of being an elitist intent on imprisoning others in underdevelopment. Shweder did get to print his own response to the three reactions, concluding with a stirring statement: “I fully confess to rejecting the idea that the only or very best way to be dignified, decent, rational, and fully human is to live the life of a North American or a northern European” (2000:176).

On not going for the jugular

Shweder is correct, and his reaction is certainly understandable. However, to phrase this in terms of a classic defense of cultural relativism left him open to backlash. Harrison accused him of “a kind of anthropological imperialism that would encase cultures in permafrost” (xxvii). Shweder also missed the chance to go for the jugular and question a central premise from Harrison. “It is, for example, the cultural contrast between Western Europe and Latin America that I believe chiefly explains the success of the Marshall Plan and the failure of the Alliance for Progress” (xxxii).

Leaving aside the issue of how much Latin American history is intertwined with the history of Western Europe (note the word Latin), and leaving aside that the question of Marshall Plan success versus Alliance failure is actually much more complicated than this characterization, the simple fact is that comparing the Marshall Plan to the Alliance for Progress is like comparing a sit-down meal to circus peanuts. Never, ever, in the whole history of development initiatives has anything been done on the scale of the Marshall Plan, and the Marshall Plan was carried out in countries that had recently been at full productive capacity, industrial war machines. To take one example, Italy, with a population of 47million people in 1950, received 1.2 billion dollars in a four-year period from 1948-1951 (Wikipedia, Marshall Plan), or about $25/person. This can be compared to Colombia, which was supposed to be a “showcase” for the Alliance. Expenditure figures are more difficult to ascertain, but a generous back-of-the-envelope calculation would be about $108million spent in the early 1960s (with a large part of that in loans, not grants), for a 1960 population of about 15.5million people, or about $7/person (see From the Alliance for Progress to Plan Colombia).

The “failures” of the Alliance for Progress are really from a genuine lack of political will and resource commitment. That nothing on a Marshall Plan scale was ever done for developing countries is confirmed by Lauchlin Currie, the author of the first-ever World Bank mission study in Colombia, who in 1967 suggested that a truly comprehensive approach be implemented in three pilot countries–one in Latin America, one in Africa, and one in Southeast Asia–to prove development could be accomplished, and then use the estimates from those pilot countries to come up with a price tag that would be a Marshall Plan for the world (Currie, Obstacles to Development, p.139). Obviously this never happened.

It’s really too ridiculous that a fuzzy-headed cultural anthropologist like me has to do the math and take to task the collection of supposedly hard-nosed economists, political scientists, sociologists, and business consultants. It is not the “cultural contrast” that explains the Marshall Plan versus the Alliance for Progress: it’s the money. (Fortunately, at least on issues of race in the U.S., some sociologists have done the math on money to figure out that much of the difference between white and black trajectories can be attributed to differences in net wealth. It’s not culture, it’s net worth. See Black Wealth / White Wealth or Being Black, Living in the Red; also see content section Racism and biological anthropology and for an update on the average white/black wealth gap, Social Construction of Race = Conservative Goldmine.)

Wedged between Edgerton and Shweder is a chapter by Thomas Weisner, “Culture, Childhood, and Progress in Sub-Saharan Africa.” Weisner is a hidden gem of critique, providing a counterpoint to statements like the crazy mischaracterization Brooks makes about Haitian parenting:

Given the cultural importance, personal intimacy, and ambivalence that attach to parenting and child rearing, why focus on changing the values and practices of children’s cultural careers that families both defend and are struggling to change? Indeed, I have to wonder why those interested in achieving economic development and new forms of civic life displace our attention by focusing on the details of how parents should raise their children.

Families could be helped so much more easily through the provision of the means to establish basic and universally desired social supports and thereby the wherewithal to achieve meaningful daily routines of family life. . . . there certainly is reason to provide a foundation that establishes any culture’s ability to provide well-being for children: the basic social supports of security, stability, health, and resources that permit families to achieve for their children a sustainable daily routine in their community that meets their goals. That is progress. (2000:155)

In this respect, Weisner’s critique–let’s get off the high-horse of values and provide real resources and options–is very much in line with what Lila Abu-Lughod concludes as an alternative to non-interventionist cultural relativism, pleading for

what I do believe should be a universal human right–the right to freedom from the structural violence of global inequality and from the ravages of war, the everyday rights of having enough to eat, having homes for their families in which to live and thrive, having ways to make decent livings so their children can grow, and having the strength and security to work out, within their communities and with whatever alliances they want, how to live a good life, which might very well include changing the ways those communities are organized. . . .

Could we not leave veils and vocations of saving others behind and instead train our sights on ways to make the world a more just place? The reason respect for difference should not be confused with cultural relativism is that it does not preclude asking how we, living in this privileged and powerful part of the world, might examine our own responsibilities for the situations in which others in distant places have found themselves. We do not stand outside the world, looking out over this sea of poor benighted people, living under the shadow–or veil–of oppressive cultures; we are part of that world. Islamic movements themselves have arisen in a world shaped by the intense engagements of Western powers in Middle Eastern lives. (Do Muslim Women Really Need Saving?, 787, 789)

The problem is not exactly whether culture matters–of course patterns of learned behavior are important–but using them as an explanation for success or failure economically, or for explaining particular political regimes, is extremely problematic.

The point about culture seems to be slowly dawning on David Brooks, who reassessed Huntington in 2011:

In retrospect, I’d say that Huntington committed the Fundamental Attribution Error. That is, he ascribed to traits qualities that are actually determined by context. . . . It now appears that people in these nations, like people in all nations, have multiple authentic selves. In some circumstances, one set of identities manifests itself, but when those circumstances change, other equally authentic identities and desires get activated. . . .

I’d say Huntington was also wrong in the way he defined culture. . . . Culture is important, but underneath cultural differences there are these universal aspirations for dignity, for political systems that listen to, respond to and respect the will of the people. (Brooks 2011, Huntington’s Clash Revisited)

Without getting into these universal aspirations, I’ll just see the positive and say that Brooks is telling us we need a much more dynamic view of cultural potential. Now Brooks should revisit that Haiti column. As Brazil (featured in a corner-iconic picture on Culture Matters as example of impoverishment) surges into an economic powerhouse, it may turn out African-influenced religions aren’t so bad for economic success. After all, economic success may come from working hard and know-how, but it can also come from luck, geographic accident, pillage, and ruthless exploitation. Culture can be a wonderful justification for economic success, especially when covering over exploitation.

Can the title Culture Matters return? The people at the blog at the blog titled Culture Matters seem to think it is OK. Perhaps things are different in Australia. I maintain we need to defend the concept and idea that learned patterns of behavior matter, but loudly abandon culture terminology, to the point of showing how often culture doesn’t matter.