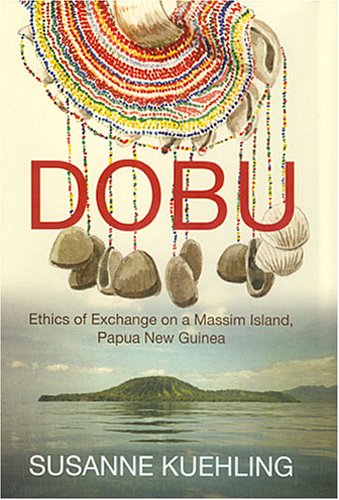 Ruth Benedict’s first example in her 1934 Patterns of Culture, “The Pueblos of New Mexico” wonderfully illustrated her theme. Benedict provided a people who are obviously racially indistinguishable from their neighbors, and in many ways sharing a similar physical environment, yet with polar opposite behavior. Benedict famously invoked Nietzsche, Greek tragedy, the Dionyisan and the Apollonian (78-79). Surely here was a perfect example of anti-race-determinism, anti-environmental-determinism, and in Benedict’s celebration of The Pueblos’ stereotype-busting sobriety, a clear attempt to undermine the efforts of hierarchical sorting. Might we not prefer this culture free of crime, drunkenness, and violence?

But anyone who might accuse anthropologists of romanticizing or down-playing the bad parts in other societies should read the chapter on Dobu. Drawing on the fieldwork of Reo Fortune, Benedict painted quite a picture of Paranoid Dobuans: “As Dr. Fortune says, ‘The Dobuans prefer to be infernally nasty or else not nasty at all'” (171). My favorite assignment when reading this chapter in a Cultural Anthropology class is to ask students to note a favorite sentence about the delightful Dobuans. It certainly makes me wonder if readers would really get Benedict’s message of cultural relativism and the need for tolerance. Maybe–except for those people from Dobu!

Dobu: Ethics of Exchange on a Massim Island

Apparently people have long been suspicious of Benedict’s account. Benedict seems to have exaggerated even from Fortune’s fieldwork–Fortune later sought to dissociate his work from her portrayal (my thanks to anthropologist Caroline Thomas for writing me about this). But Dobu was perhaps always too far away for anthropological re-study. In 2004, Susanne Kuehling published Dobu: Ethics of Exchange on a Massim Island, based on contemporary fieldwork in Dobu which re-visits and challenges the Benedict-Fortune study. As I noted in the satiric From Culture to cultures, the Kuehling account seems to still get much less attention than the Benedict original. I had also wondered what the Dobuans thought of being cast as the Supreme Villains in one of the best-selling anthropology books of all time.

After these comments, I was grateful to hear from Professor Kuehling. Kuehling teaches at the University of Regina, and writes:

Thank you for mentioning my book on Dobu! You’re right, it has not really changed the world as yet, but the Dobu islanders are very happy and proud of being represented in it. They had no idea that they were described as so horrible yet they felt relieved that I corrected this image. No damage done to their egos, as they learned about Benedict’s version long after my book was out and mentioned on the Dobu page of Wikipedia.
Strange world.

Strange world indeed. And as Kuehling relates, the real problems in Dobu are not the Benedict-Fortune misrepresentations. The real problems are persistent poverty, inequality, and Dobu’s peripheral position in the global economy. As should have been obvious from Benedict, the fact that they had been incorporated into a colonial system that recruited Dobuans as indentured servants–well maybe, just maybe, their position in the world system might have something to do with their attitudes and representation toward an outsider anthropologist.

Now certainly, as Caroline Thomas pointed out to me, and as Will Rollason notes in his review of Kuehling, seventy years had passed. However, what is most important here is not necessarily the difference in field methods or data–I am not trying to impugn Fortune’s account, or even Benedict’s–but that the primary interpretation of Dobuan character was taken as a manifestation of cultural patterning.

It is of course quite interesting how Benedict was able to traverse from a fairly Noble-and-Wise Savage to the Devious-and-Evil Savage (see Ruth Benedict, Franz Boas, and the Anthropological Concept of Culture). But perhaps equally important is how Benedict’s descriptions tended to freeze people in time and space. Cultures become internally integrated and isolated. From the last paragraph of “The Pueblos”:

They have made, in one small but long-established cultural island in North America, a civilization whose forms are dictated by the typical choices of the Apollonian, all of whose delight is in formality and whose way of life is the way of measure and of sobriety. (Benedict 1934, 129)

Benedict moved from The Pueblos as “cultural island” to a real island. In each case, Benedict compared peoples to their neighbors, but they were different. And that difference was not a relationship, but an essence.

Anthropologists refer to such descriptions as reifications–turning what are relations, processes, and abstractions into nouns, essences, and things. This was one of the key themes Michel-Rolph Trouillot took as his target in Global Transformations: Anthropology and the Modern World:

Benedict was very concerned about integration and wholeness because it contributed to the idea of radical cultural difference–that what most mattered was not biological determinism or the island climate, but those learned patterns of behavior. But do we need integration, wholeness, and isolation to talk about difference? There is more than a hint that the observed differences may not be so much due to internal integration but to the differential integration of peoples and individuals into global processes, the geography of imagination and geography of management that was already well underway by the time of Franz Boas, Ruth Benedict, and Reo Fortune.

Who cares about reifications anyway?

Sometimes it seems like anthropologists engage in excessive representational battles, in which terms like reification or reductionism are accusatory epithets without substantive definition. Although anthropologists are hardly the only ones to traffic in accusations about various –isms (see the 2013 scientism and post-modernism strangeness), it is sometimes worth spelling out: who cares about reifications?

In graduate seminars, Trouillot would say that any text must make some necessary or convenient reifications, reductions, and essentializations, but it is important to be especially careful not to reify the central object of analysis (see Whiteness is a project, not a skin tone). When we talk about The Pueblos, The Dobuans, or The Kwakiutl, it potentially contributes to misunderstandings that blind us to power, blind us to inequality, and blind us to history. Culture then starts to look a lot like race, as Zoë Burkholder writes in Franz Boas and Anti-Racist Education:

Boas intended anthropology’s non-essentialist culture concept to replace understandings of human difference as the result of innate, biological “race.” The culture concept trickled down from anthropologists like Benedict to textbook authors and finally through teachers into the classroom. A review of textbooks and teaching journals from 1939 into the 1950s show, nonetheless, educators rarely applied the differences between race and culture that Boas promoted. Instead, educators typically viewed race and culture as synonymous. Well-meaning teachers had their students study “racial” minorities in terms of the positive cultural attributes that seemingly defined them. The result was a softer, culturalized notion of race that reproduced the dangerous, tautological generalizations Boas had rallied against in the first place. (2006:25)

Certainly Burkholder’s description of the “trickle down” effect is important. But really the same tendency to turn culture into a euphemism for race–to make culture relatively integrated, homogeneous, isolating, and rather determining–is already readily available on Dobu, without even the “positive cultural attributes”!

Update 2019: This 2013 post received renewed attention in 2019. Perhaps because of A Racist President and Racial Trauma, people were looking again at definitions of culture and race?