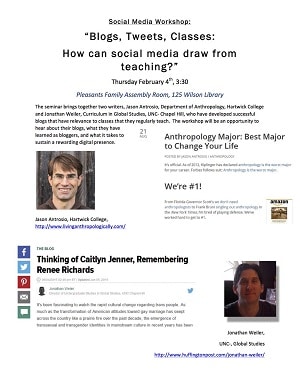 In February 2016, I was honored to participate in several sessions around the theme “Defending Anthropology 101 and the Mega-Class: Relevant Teaching for the 21st Century.” The idea of Defending Anthropology 101 was sponsored by the Department of Anthropology at the University of North Carolina – Chapel Hill. Many thanks to Professor Charles Price and Rudi Colloredo-Mansfeld for organizing. Professor Thomas Chivens joined us from the University of Michigan. This post summarizes the initial people and sessions, and then adds some notes.

Psych 101, Econ 101, Anth 101: Does Anthropology need to offer an entry-level synthesis of the field to stay relevant in a general education curriculum? As a “101” course, Anthropology 101 suggests an opportunity for learning not just foundational ideas for the discipline but a set of concepts that can be put to work in the real world by any student to generate a basic anthropological understanding of the contemporary world. However, are topical courses such as Medical Anthropology or “Culture and Globalization” more suited to the task? Does the commitment to four fields actually undercut the pop-culture power of ANTH 101?

Notes: This conversation was a particularly interesting look at different curricular models for an Introduction to Anthropology course. On one extreme Thom Chivens talked about the University of Michigan mega-sections of Anthropology 101, ranging from 250-450 students fulfilling a Race and Ethnicity requirement and sustained by the Conrad Kottak textbook empire. In this curriculum, Anthropology 101 explicitly does not count toward the anthropology major. At UNC, the Anthropology 101 sections are generally smaller (around 120 students), and while it is not required for the major, it can count as part of the anthropology major. Finally, the Hartwick College model is of small 30-person sections, and Introduction to Anthropology is very much required as the building block course for the major and is a prerequisite for other courses.

Update: I also discussed some of the possible political implications for teaching the Michigan version of Anthropology 101 in Anthropology’s Unfinished Revolution.

Blogs, Tweets, Classes: How can social media draw from teaching? with Jonathan Weiler

The seminar brought together two writers, Jason Antrosio, Department of Anthropology, Hartwick College and Jonathan Weiler, Curriculum in Global Studies, UNC – Chapel Hill, who have developed successful blogs that have relevance to classes they regularly teach. The workshop was an opportunity to hear about their blogs, what they have learned as bloggers, and what it takes to sustain a rewarding digital presence.

Students have long written “I wish the professor talked more/explained more/lectured more” on course evaluations in smaller classes, feeling discussion based learning did not cover the material properly. In those smaller format classes, we often set aside those desires for a lecture. Students in flipped or active classrooms also talk about wanting more lectures. Why shouldn’t we set these aside as well and be more tolerant of the open-endedness that happens in a smaller class? Alternatively, instead of dismissing these desires for lectures as a kind of laziness or false search for simplicity, what do students want in a lecture?

In the response to Molly Worthen’s Lecture Me. Really., many who challenged her position also said that lecturing was “one tool in a diverse tool box,” but few explain where that tool matters most. Can we pinpoint that? And in doing so do we clarify when active learning is the sound alternative? Are there particular reasons in an Anthropology 101 course when we are trying “To make the strange familiar” that we do indeed have one of those moments when the lecture is the right tool in the tool box?