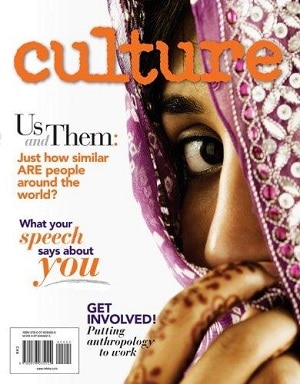 Doubling Down on Culture

In 2011, prominent introductory anthropology textbook author Conrad Kottak teamed up with Lisa Gezon to produce the new “magazine style” CULTURE. Anthropology definitely has some branding woes–see Anthropology is the worst college major–and Kottak is well known for keeping a finger on the pulse of pop culture. But can a glossy magazine textbook, doubling down on culture in anthropology, help the anthropology brand?

Doubling Down on Culture in Anthropology–Why Now?

Why might textbooks now be emphasizing culture in anthropology? Two immediate possibilities come to mind. The first and more generous possibility is as a response to the ascendancy of genetic and biological determinisms. Doubling down on culture in anthropology attempts to counter the trend. This seems to be what is at work in the 2012 article The biological myth of human evolution by Jonathan Marks, which counts heavily on the idea of culture as inextricable from the human animal (see Biocultural Naturenurtural Human Biologies).

The second possibility is this is not actually doubling down but “sailing on,” an extension of the culture-promoting anthropology has been doing since at least Ruth Benedict’s 1934 Patterns of Culture (and see Ruth Benedict & the Concept of Culture).

By “sailing on,” I am thinking of how Norman Sauer in 1992 asked forensic anthropologists not to simply keep making race identifications without an educational component on why such identifications did not validate traditional race categories:

Furthermore, our work with law enforcement officials promotes a communication channel with personnel who might benefit professionally from exposure to the notion that perceived races are not reflections of biological reality. But we “sail on” as though the question of races was never an issue in anthropology.

But whether this is in response to genetic determinists or sailing on, it appears as though the question of culture was never an issue in anthropology, and introductory anthropology needs to convince the world at large of the importance of culture.

The Non-Problem with Culture in Anthropology

At this point, anthropologist readers wince and expect me to take Kottak and Gezon to task for ignoring the internal-to-anthropology critique of culture, a critique mainly from Marxism, feminism, post-modernism, and post-colonialism. Although I find elements of those critiques important, I don’t think that’s the problem with a textbook like Culture. Indeed, on the inside there is more attention to those kinds of critiques than the cover indicates–for example, the chapter on “The World System and Colonialism” concentrates more heavily than many anthropology textbooks on political economy, with references to Wallerstein, Braudel, Marx, Weber, and a discussion of Sidney W. Mintz‘s Sweetness and Power (see also my review of Kottak’s four-field Anthropology).

I am also struck by Andre Gingrich’s comment about these critiques:

A careful and balanced history of those sequences of anthropological autocritique still remains to be written, but to my mind, one may argue with some justification that each of these critiques in some ways went too far and that none of them fully achieved what its main advocates originally had in mind. (Transitions: Notes on Sociocultural Anthropology’s Present and Its Transnational Potential, 2010:555)

This is especially striking in the light of the 2010 flap about Science in Anthropology, which has surely nixed the possibility of a “careful and balanced history” of the autocritique.

Again, although elements of the autocritique are important, almost all anthropologists have a completely usable understanding of the concept of culture. I also do not find introductory textbooks objectionable in their presentation of the concept of culture. Moreover, many people were turned off by the autocritique, seeing it as the source of vitriol and jargon. So what’s the problem?

The Real Problem with Culture in Anthropology

The real problem with promoting culture right now is not the concept of culture but that we are completely saturated with culture terminology. It’s not like anyone needs to be introduced to the word “culture.” It is already everywhere, as documented in Seeing Culture Everywhere, from Genocide to Consumer Habits: “We conclude by offering readers a series of questions designed to help anyone who needs to evaluate the impact of decisions potentially involving cultural difference to decide whether, in a particular case, culture matters” (Breidenbach and Nyíri 2009:29).

Indeed, not only do we need to decide whether culture matters, we often find culture used to justify pernicious activities, such as reducing the hiring chances of “too ethnic” job candidates: “Discrimination in many cases may not even be intentional . . . but simply a matter of people gravitating toward similar people, casting about for the right ‘cultural fit,’ a buzzword often heard in corporate circles” (In Job Hunt, College Degree Can’t Close Racial Gap).

Franz Boas, who fought for thinking about culture as a way to counter racial discrimination, can now roll over in his grave.

The difference between our time and the time of Benedict or Boas, is that we are not introducing culture as a term and a concept together. We are trying to adjust the concept underlying a term which everyone has already heard–a lot. For most people, culture is 1) personal values and beliefs, often with a consumer-commodity aspect, and 2) a kind of race-lite, roughly parallel to traditional notions of race but not quite as deterministic. As John and Jean Comaroff write:

Cultural identity, in the here-and-now, represents itself ever more as two things at once: the object of choice and self-construction, typically through the act of consumption, and the manifest product of biology, genetics, human essence (Ethnicity, Inc., 2009:1).

Moreover, as Zoë Burkholder has discussed, this version of culture actually emerged during the time of Benedict and Boas: “The result was a softer, culturalized notion of race that reproduced the dangerous, tautological generalizations Boas had rallied against in the first place” (Franz Boas and Anti-Racist Education, 2006:25)

Under these conditions, it is very difficult to dislodge culture as it is already understood and replace it with an anthropological concept. It would take quite radical classroom tactics, and even those would probably only alter the concept at the margins. At the end of the semester, too many evaluation forms will read: “I never realized how much culture really matters.” And then out into the world.

What Do We Do?

To be clear: at this point, there is little value in an anthropological internal critique of culture. There is not even much to be gained from getting snobby about introductory textbooks. What is of concern is the culture-splash. Again, this has nothing to do with the concept of culture in anthropology and everything to do with how its use has spun way out of anthropology’s control.

On a workaday level, I probably end up following the recommendation of “whistle-blowing, and trying to propagate our own view of culture” (Hannerz 2010:546; for an evaluation of Hannerz, see Greg Downey’s Brand Anthropology: New and Improved, with Extra Diversity!).

But there are not enough anthropologists or enough whistles to do the whistle-blowing, let alone promote our own views. And it may actually enhance our whistle-blowing if we officially drop the term. So as an ideal, it is time to adopt the recommendation from Michel-Rolph Trouillot, bidding Adieu Culture:

We need to abandon the word while firmly defending the conceptual kernel it once encapsulated. . . . Abandoning the word “culture” would free practitioners from within all the subfields of the discipline, and enhance dialogue between sociocultural anthropologists, archaeologists, and especially biological anthropologists. Biological anthropologists would not have to find “culture” in the behavior of humans or other primates. Rather, they would have to specify the role of biology in patterning particular instances of cognition, volition, and activity among the groups–human or otherwise–that they study, and detail the degree to which symbolic constructions inform these patterns. Debates would turn on specifics, not on generalities. Anthropologists will undoubtedly find that those specifics can open new discussions by providing links across disciplinary boundaries. . . .

There is no reason today to enclose any segment of the world population within a single bounded and integrated culture, except for political quarantine. The less culture is allowed to be a shortcut for too many things, the more sociocultural anthropology can thrive within its chosen domain of excellence: documenting how human thought and behavior is patterned and how those patterns are produced, rejected or acquired. Without culture, we will continue to need ethnography. Without culture, we may even revitalize the Boasian conceptual kernel, because we will have to come to the ground to describe and analyze the changing heads of the hydra that we once singularized.
—Global Transformations, 2003:115-116; see In Memoriam, Michel-Rolph Trouillot, 1949-2012 and Adieu, Culture: Fetishizing Fieldwork on the Road to Essentialism

Dropping the terminology of culture in anthropology might help the anthropology brand–as well as hone our research, debates, and interdisciplinary understandings.