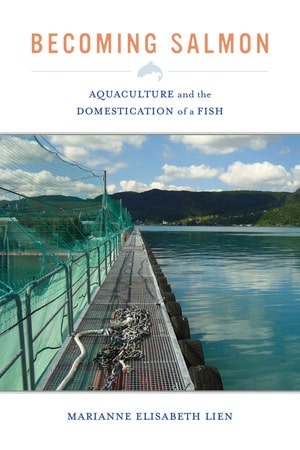 For Cultural Ecology 2020 there were three readings which I’ve grouped under the general issue of understanding complexity. We read the Tim Ingold chapter “The dynamics of technical change” (362-372). In Arts of Living on a Damaged Planet we read “Unruly Appetites” by Marianne Elisabeth Lien and “Without Planning” by Deborah Gordon in the “Monsters” section (M107-139) Lien is the author of Becoming Salmon: Aquaculture and the Domestication of a Fish which is a helpful image for the topic. The analysis concentrates on the Ingold chapter.

Ingold’s chapter on “The dynamics of technical change” is essentially about how we think of the evolution of technology. In some ways, the chapter reprises elements of previous chapters on Tools and Machines as well as the Concept of Technology. Still, Ingold develops some new points in this chapter on how to measure complexity, leading to some fascinating conclusions.

I would begin by observing that in some ways anthropology has been very successful at questioning the typical story that life has evolved from simple to complex. In terms of language, for example, it is much less common to believe that Western languages are complex and that non-Western languages are simple. Or in terms of social complexity, much of my Intro-to-Anthropology class on complexity is spent trying to question those old-fashioned archaeological terms of “simple societies” and “complex societies.”

The questioning of a natural evolution to complexity has even occurred in the scientific study of biology. Going back to Andreas Hejnol’s chapter “Ladders, Trees, Complexity, and Other Metaphors in Evolutionary Thinking,” at least some biologists are thoroughly shredding the idea of progress or inevitable complexity in biological evolution.

One of the crucial biologists who helped question the idea of complexity was Stephen Jay Gould in Full House. Gould demolished the idea that there was a natural evolution to complexity. Instead, it was more like a “drunkard’s walk,” which kept bouncing up against the wall of minimal complexity–bacteria–and would therefore eventually result in multi-celled organisms. But crucially, Gould also insisted that we have been, are, and always will be in the “Age of Bacteria.”

Scott Gilbert’s chapter on “Holobiont by Birth” in Arts of Living on a Damaged Planet reiterates Gould’s argument (we read this chapter for the previous class on Art): “We talk about the Anthropocene. We talk about the age of fishes, and we talk about the age of reptiles, and the age of mammals. No. It is the age of bacteria, always was, and always will be. We evolve as teams, as consortia–and we likely always have” (M82-83; Gilbert is referencing Gould’s 1996 “Planet of the Bacteria“).

So far, so good. But what is notable is that although anthropology, and some biologists, have challenged progressive tendencies in both biological evolution and cultural evolution, what has usually gone unchallenged is that there is technological evolution. “It is remarkable that although
the majority of anthropologists are deeply suspicious of the idea that there is any inherently progressive tendency in the history of human culture, they are inclined to make an exception of technology, and are quite content to talk about peoples with ‘simple’ and with ‘complex’ technologies” (Ingold, 366).

But how do you measure the technological complexity?

Immediately after talking about how anthropologists do tend to speak of “simple” and “complex” technologies, Ingold notes that “precisely how the simplicity or complexity of a technology is to be gauged, however, has remained far from clear” (366). Ingold turns to Wendell Oswalt, who attempted to define a measure in terms of “technounits” (see student comment below).

Defining complexity in terms of technounits leads to some surprising observations. First, the tools of hunting and gathering may actually be more complex than the tools of horticulturists or farmers:

On the basis of a comparative survey of the toolkits of hunter-gatherers, farmers and herdsmen, Oswalt was able to refute the common assumption that hunters and gatherers have simpler tools than any other human groups. In fact the most complex tools were found among specialised hunters, especially hunters–like the Inuit–of large aquatic mammals, who have to use considerable ingenuity to obtain inaccessible or potentially dangerous prey. The herdsman, who has ready access to comparatively docile animals, faces nothing like the same technical challenges, and his toolkit is correspondingly simpler: thus the lasso, the principal instrument by which the reindeer herdsman catches hold of his animals, is no more than a length of rope tied to a sliding toggle. The equipment of the gatherer tends to be simpler than that of the hunter (plants do not attempt to escape those who ‘hunt’ them, nor do they have to be outwitted or outmanoeuvred), but again, the tools of the farmer are no more complex. For both gatherer and farmer, the essentials may consist of just an axe or adze, digging stick, and some form of carrying device for transporting harvested produce. (Ingold, 366-367)

However, measurements on the basis of technounits also led to some comparisons which caused unease. For example, Bill McGrew’s work on Chimpanzee Material Culture compared chimpanzee toolkits with Tasmanians Aborigines:

Not surprisingly, when McGrew first presented his findings, at a conference devoted to the anthropology of hunter-gatherer societies held in London in 1986, they drew a storm of protest. Was he really trying to tell us that Tasmanian hunter-gatherers had scarcely advanced beyond the apes, that they were stuck in an evolutionary time-warp? In his defence, his intention was no more than to suggest the possibility of an intermediate level of technology in the transition from our ape-like ancestors to the earliest hominid forms. Yet in taking nineteenth-century Tasmanian Aborigines as exemplars of early hominids, McGrew comes close to returning to the overt racism of an earlier era of anthropology, when it was quite usual to regard the ‘savage’ as representing an earlier stage in human biological evolution, and thus as occupying a half-way stage in the transition from apes to ‘civilised’ (that is, modern European) humans. (Ingold, 364)

Indeed, we should be super-careful whenever we start trying to measure technological complexity, as to-this-day assumptions about technological achievement is the basis for some of the worst racism.

In fact, Ingold is quick to note–and here the lasso example returns–that “comparisons based on the structural properties of the tools themselves can be misleading” (367). There’s a bigger and more important conclusion:

To comprehend the technical accomplishments of hunter-gatherers, or of any other people for that matter, it is not sufficient just to look at their tools. We have to understand their knowledge. Tools are of no use if you don’t know how to work with them; moreover up to a point, the simpler the tool, the more knowledgeable and skilled you have to be to be able to work it effectively. The reindeerman’s lasso is a simple tool, but it requires immense skill to use it effectively. The same could be said of an axe, digging stick, spear or boomerang. The food processor on my kitchen table is, by contrast, an extremely complex tool, with hundreds of interconnected parts. But it took only a few minutes to learn to use it. (Ingold, 368-369)

These are points I turn to again and again in my Intro-to-Anthro courses, emphasizing that hunter-gatherers had complex tools, and hey: which is really more difficult to use, a lasso or those “smart” phones?

Near the end of this chapter, Ingold turns to how technologies are invented. This turns out to be less of an “out of thin air” process than we often imagine:

Every novelty is but an expedient solution to a very specific, context-bound, local difficulty: it is a matter of getting by with what is already available rather than producing the absolutely new. Thus it is an illusion to suppose that anything is ever perfectly fit for the purpose to which it is used. ‘Every thing we design and make’, writes David Pye, ‘is an improvisation, a lash-up, something inept and provisional. We live like castaways . . .’ (1964: 10). More often than not, the stock of materials available to the maker consists of previously made things, constructed for other purposes but now co-opted for the project in hand. (Ingold, 371)

And at a time when we are more than ever living like castaways–it is time for some improvisations, some lash-ups, some provisional thinking that will nevertheless reimagine our current situation.