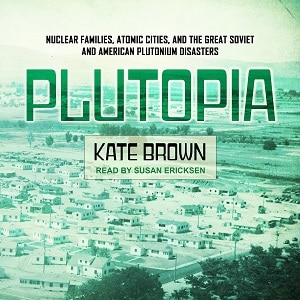 This class and blog-post takes its title from two chapters in Arts of Living on a Damaged Planet. These seem like appropriate items for reflection during the time of coronavirus.

Nuclear Spelunking in the Chernobyl Zone

Kate Brown’s chapter is a fascinating account of Aleksandr Kupny who keeps returning to Chernobyl:

Kupny is not your usual disaster tourist, one who hopes to snap a photo of ruin and destruction as a metaphor for the larger folly of human societies. For Kupny, crawling into the belly of the burned-out reactor was as close as he could get to entering a mushroom cloud to see how nuclear power works. His life’s work has been to visualize and map this scarcely sensible phenomenon. He placed himself before a barrage of hazardous radioactive isotopes because he sought to grasp decaying radioactive isotopes as the elemental force burning at the center of the universe, the energy that gives life and can snatch it away. (G36)

Brown includes a fascinating account of nuclear power in Japan, the 1946 film Madame Curie and then Godzilla (G38-G40).

Marie Curie believed in the power of radiation. Brown retraces the faith that people like Kupny had in machines, socialism, and radiation:

In conclusion, Kupny “wants us to visualize those flickering, falling leaves of energy lit with autumnal light as a way of seeing his lost world of socialism with all its possibilities and promises” (G49).

When All You Love Is Being Trashed

Deborah Bird Rose’s chapter on “Shimmer” aims to “explore a matrix of power, desire, and lures and to move across several species and cultures to draw our attention to the brilliant shimmer of the biosphere and the terrible wreckage of life in this era that we are coming to refer to as the Anthropocene” (G51; see student comment below).

There is a certain poignancy in reading this chapter, since it was one of her last published works: see Remembering Deborah Bird Rose (1946-2018).

The chapter certainly calls attention to human cruelty: “Man is the only animal that shoots other creatures with paintball guns, and when the creatures flap around in terror or fall to the ground injured and in shock, man is the only animal that cheers” (G56). But she also emphasizes “our remarkable plasticity as individuals and as a species. While cruelty is indeed one of the great insignia of a distinctly human way, there are other sides of our capacity that help us bring ourselves into fellowship with others” (G56).

Like Brown’s conclusion above, “we are therefore called into gratitude for the fact that in the midst of terrible destruction, life finds ways to flourish, and that the shimmer of life does indeed include us” (G61).

This Ingold chapter in many ways is a review of the material discussed in the previous class on technology. Ingold begins: “for many centuries, Western thought has been dominated by the idea that the mission of mankind is to achieve mastery over nature” (312). In Western thought, technology is the instrument for mastering nature. “Thus society is considered to be the mode of association of rational beings, nature the external world of things as it appears to the reasoning subject, and technology the means by which a rational understanding of that external world is turned to account for the benefit of society” (312).

There’s a very helpful (and funny) video that illustrates the attitude of Western thought. Check out The Kill:

As discussed in the previous class typical Western thought on technology is that we in the West have it, others do not (Ingold, 298). It is used as a way to rank and hierarchize people from the “civilized” (312) to those who are called “behind” (or backward, stupid, primitive, under-developed, traditional). In typical Western views, technology is a separate sphere that evolves on its own, from simple to complex, as does society. The relationship of Society–Technology–Nature is one in which we in society master nature through the use of technology (check The Kill video).

The standard anthropological approach to technology, as discussed in the previous class, is a blank stare: Huh? What’s that? We study that? Or, as Ingold puts it, technology is “safely ignored” (313-314). When anthropologists do make any pronouncements, it is to say that we all have technology as a human universal, or that there are no “simple societies”: “Indeed in their self-conscious and often contrived attempts to avoid the derogatory connotations of the notion of primitiveness, anthropologists are inclined to qualify their references to ‘simple societies’ with the rider that ‘simple’ denotes technological simplicity and carries no immediate implications as regards social organizations and culture” (313). And anthropology enjoys celebrating the ingenuity of non-Western peoples: “If Westerners belittle Aborigines on account of the simplicity of their technology, Aborigines are equally entitled to belittle Westerners on account of their primitive notions of kinship” (313).

“Two views that are diametrically opposed often turn out to be so because they are based on common premises” (313). With that one sentence, Ingold reveals a fundamental truth that may be worth the price of the whole book. This idea has certainly guided my teaching, and is one reason I almost never have a “debate” in my classes. Most debates are based on a diametrical opposition, sharing premises that are in common but unstated. The purpose of a college-level education is to uncover those shared premises, not to replicate the diametrically opposed debates we can get from turning on most TV news shows.

In terms of technology, Ingold insists that for modern Western thought and anthropology “both sides suppose that technology can be scaled in terms of degrees of complexity” and “that technology comprises an objective system of relations among things, that is wholly exterior to the social domain” (312).

Technology is a Claim

As we saw in the previous class, it can be quite difficult to define even the basics like tool, machine, and especially “technology” (296-97). Here, Ingold elaborates to say that when we call something a “technology,” we are making a claim about it (312). When we use the term “Technology” we are abstracting from existing things and techniques (315). Or, put differently, being a “tool” [laugher allowed] is not the same thing as being a stone or a piece of wood:

“Being a tool” is not at all the same as, say, “being a stone” or “being a piece of wood.” For whereas the latter refers to intrinsic properties of the object itself, the former refers to what it affords for a user. An object–it could be a stone or a piece of wood–becomes a tool through becoming conjoined to a technique. (319)

The implications of this argument are mind-boggling. First, machines do not make history (311) and therefore technology is not separate from the social world (314). Second, the history of simple-to-complex should be re-written as an attempt of “externalizing” or “disembedding” or “objectification” of technology (314, 319, 321-322; see student comment below). And then: “there is no such thing as technology in pre-modern societies. Let me add at once that I do not mean that people in such societies lack tools or technical skills” (314). And it may be true in our own society too, that there is no such thing as technology.

From Technology to Technique

For Ingold, what we most need to study are techniques and skills. He includes a very simple contrastive sketch:

As a form of knowledge, skill (or technique) is different in kind from technology. The former is tacit, subjective, context-dependent, practical “knowledge how,” typically acquired through observation and imitation rather than formal verbal instruction. It does not therefore have to be articulated in systems of rules and symbols. Technological knowledge, by contrast, is explicit rather than tacit, objective rather than subjective, context-independent rather than context-dependent, discursive rather than practical, “knowledge that” rather than “knowledge how.” It is, besides, encoded in words or artificial symbols, and can be transmitted by teaching in contexts outside those of its practical application. (316)

Moreover, Ingold notes that “historically, as the skilled manipulation of tools has given way to the operation of mechanically determined systems, knowledge of the first kind has been gradually devalued, whilst knowledge of the second kind has come to be regarded as increasingly indispensable” (316). Certainly true for most academic instruction!


It is high time to cue the curtain

Nevertheless, the distinction between technique and technology allows Ingold to conclude with what one of my students once called his “cue the curtain” moment. He is able to dispense with the society/nature dichotomy and all the paradoxes disappear:

My solution to the problem of whether technology lies on the side of nature or human society is simply to dispense with the dichotomy, and with it the concept of technology that is predicated on this dichotomy. The paradox then promptly disappears. What we have in reality are human beings, living and working in environments that include other humans as well as a variety of non-human agencies and entities. Through their experiences of dealing with these various components of the environment, persons develop with specific aptitudes and sensibilities, that is as bearers of techniques. Reciprocally, through the deployment of their technical skills, people actively constitute their environments. But in this mutually constitutive interrelation between persons and environment there is no absolute dichotomy between human and non-human components. There are techniques for engaging with fellow humans just as there are techniques for engaging with the animals and plants on which life depends, or with materials such as wood, clay or stone in the making of equipment. (321)

And so, “it is high time to restore technique to its rightful place alongside economy, politics, religion and kinship as a proper object of social anthropological inquiry” (322). Put differently, maybe someday there will be a whole chapter on “technique” in your Intro-to-Anthro class!

Interestingly for me, I am currently attempting to introduce the concept of culture for my Intro-to-Anthropology 2020 course. Whenever I do that, I face the dilemma of trying to stress the importance of culture as learned behavior (as opposed to racial or environmental determinism). However, I am very aware that the idea of culture has become a deterministic container. Or as Ingold puts it, there is the

general anthropological fetishisation of culture, another Western concept which we have turned upon others as a mirror of our own superiority. People in “primitive” or “traditional” societies are made to appear as though their practical activities were entirely bound to the operation of technology, as their thought to the precepts of their culture, the one providing material support for the other. Technology and culture, twin pillars of the modern ideals of progress and enlightenment, confine the rest of humanity to the monotonous execution of determining systems: as technology determines practice, so culture determines thought. (321)

Note: The Ingold chapter was previously discussed as “Will Technology Save Humanity?” in Cultural Ecology 2017.