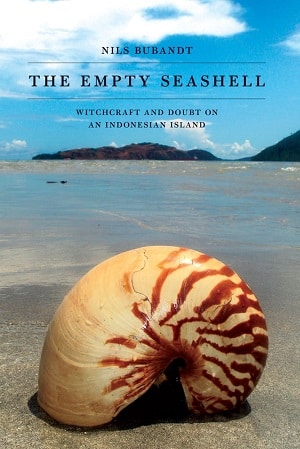 If you are looking for something that will stimulate your thinking on climate crisis, debates about whether disasters are “natural” or “manmade,” or even for insights into the current uncertainties of the COVID-19 epidemic, Bubandt’s work is a good place to start. Bubandt describes a “mud volcano” in Indonesia that began in 2006. “The mud volcano is a tragic and dystopic, but also illuminating, illustration of the Anthropocene, conventionally described as the geological period in which human activity exceeds the forces of nature” (G122; see student comment below).

One of the huge debates about the mud volcano is whether it may have been caused by human activity–drilling for fuel–or is simply a seismic event (reminiscent of debates in the US about hydrofracking). And in some ways, Bubandt is saying that we can no longer tell the difference: “Nature may increasingly be human-made, but humans have not only lost control of this nature making and unmaking; we have increasingly lost the ability to tell the difference between our own world and the natural worlds we make and destroy” (Bubandt, G124-25; see student comment from 2017).

The inability to determine a cause leads to increasing uncertainties. “This epistemological undecidability is coupled with high political stakes: the oil company wants the eruption to be a natural disaster to escape liability, while victims want it to be an industrial disaster to enforce payment of compensation. The question essentially is whether Lusi is a political event with a geothermal afterlife or a geothermal event with a political afterlife. At the moment, it is both. I suggest calling this a ‘spectral moment,’ a time of undecidability but also a time of spirits and ghosts” (G128; see student comment below).

Ingold’s chapter “On weaving a basket” is one of his shorter chapters in the book, but densely packed with insights. In some ways, Ingold’s starting point can be linked to Bubandt’s, in that he begins with the classic distinction between organisms growing (nature) and artifacts being made (human). His main point will be that “the difference between making and growing is by no means as obvious as we might have thought” (339), but making that point takes us through some of our most dearly-held assumptions, a history of thought, and some fascinating observations along the way.

So where better to begin then the famous conclusion of Karl Marx: “what from the very first distinguishes the most incompetent architect from the best of bees, is that the architect has built a cell in his head before he constructs it in wax” (in Ingold, 340). Marx’s idea was that however beautiful a natural creation–webs or honeycombs–such features issued from a creature’s biology, or what we would call DNA, whereas however crappy a human creation might be, those come from human ideas and mental activity (this distinction is parallel to what is assumed to be the difference between bee-and-human navigation which we examined in a previous class).

Ingold proceeds to compare a natural spiral shell with coiled basketry. We assume with the spiral shell that it is

of the organisms entry into the world. But interestingly when we looked at coiled basketry, we make exactly the same assumptions, but with culture. We assume it is an

of the actual basket-making process. “Thus it is supposed that the basic architecture of the organism is already established, as a genetic ‘blueprint,’ from the very moment of conception; likewise the artefact is supposed to pre-exist, fully represented as a ‘virtual object’ in the mind, even before a finger has been lifted in its construction. In both cases the actualization of the form is reduced to a simple matter of mechanical transcription: all the creative work has already been done in advance, whether by natural selection or human reason” (343). Note that in both cases, we are effectively assigning a pre-determined or teleological outcome (to return to our previous class on technology).

Ingold concedes, or rather says “I do not deny that the basket-maker may begin work with a pretty clear idea of the form she wishes to create” (342). However, the form is not the direct product of the idea. For example, right now I might have a great “idea” of a basket I want to make, but if I were to try and make a basket, it would be a complete mess. The basket “comes into being through the gradual unfolding of that field of forces set up through the active and sensuous engagement of practitioner and material. This field is neither internal to the material nor internal to the practitioner (hence external to the material); rather, it cuts across the emergent interface between them. Effectively, the form of the basket emerges through a pattern of skilled movement, and it is the rhythmic repetition of that movement that gives rise to the regularity of form” (342; see the next class on string bags and birds’ nests). So, I may have a great basket idea, but without skilled movement, I got nothing. (For the anthro-heads Ingold here goes back to Franz Boas’s Primitive Art.)

Ingold proceeds to challenge the idea that there is somehow an idea or blueprint for a shell encoded in its DNA (344-345). He notes that a shell is very much like the spiral vortex created when a bathtub drains: Does there need to be a blueprint for the spiral vortex when you drain your bathtub? Whether a shell will grow to the left or right is genetic, but it is more like an on-off switch. “In a certain species of snail, the majority of individuals have shell with a right-handed, logarithmic spiral, but in some the spiral is left-handed. It has been shown that the direction of the spiral is controlled by the products of a particular gene just as the direction of the spiral vortex in bathwater is controlled by the intentional movement of your hand. But–and this is the crucial point–the form of the shell is no more the product of a genetic programme than is the form of the vortex the product of a design in your mind” (344; Ingold is drawing on biologist Brian Goodwin and see student comment below). Genes “set the parameters of the process but do not prefigure the form” (345).

“There is, in short, no design for the spiral of the gastropod shell” (344). This is in part because it is technically impossible to encode that much information in advance:

Would it be possible, even in theory, for any design to specify the form of an organism or artefact completely? In his fascinating study of the design principles embodied in the construction of living organisms and manufactured artefacts, originally written as a textbook for students of engineering, Michael French (1988: 266–7) speculates on the question of just how much information would be needed to specify every aspect of the form of an organism. His conclusion is that the amount would be unimaginably large, far beyond what could be coded in the DNA of any known life-form. Nor is the situation any different with artefacts. True, even the greatest achievements of human engineering are no match for the most commonplace of organisms: thus the steam locomotive, as French wryly observes, “is simplicity itself compared with the intricacies of the buttercup” (1988: 1). But then, no human design could approach the DNA of the genome in its informational content. Once again, a complete specification would apparently lie beyond the realms of possibility. In short, the forms of both organisms and artefacts seem to be significantly underdetermined by their underlying blueprints. That being the case, French suggests, we may have to recognise that a great many features of organisms and artefacts are merely accidental, due to chance, revealing not the designs themselves but their limitations. (344, see student comment below and also the 2017 class Is DNA a Blueprint?)

If there is no mental blueprint for a basket or no DNA blueprint for a shell, how then do we account for persistence of form over time? What gives these forms “remarkable durability” (345)? Or, as seen in the previous class, what accounts for evolutionary complexity?

Ingold is battling against ideas of DNA or culture as a form of direct replication or non-creative copying:

If forms are the outcomes of dynamic, morphogenetic processes, then their stability can be understood in terms of the generative principles embedded in the material conditions of their production. For the shell the principle is one of invariant proportion; for the basket it is the principle that every increment of longitudinal extension is coupled to what has gone before by transverse attachment. Whereas the first principle, through simple iteration, will always and everywhere generate a logarithmic spiral, the second will just as reliably generate an equable one. It is these generative principles, and not the fidelity of genetic or cultural copying, that underwrite the constancy of the respective forms, and explain their persistence over immense spans of both historical and evolutionary time. (346)

Ingold turns from the emphasis on making to an emphasis on weaving so that objects are “the embodiment of a rhythmic movement” (346). Or as one of my students once put it: “The artefact is a crystallized embodiment of activity. Which is freaking awesome.”

“Weaving continues for as long as life goes on–punctuated but not terminated by the appearance of the pieces that it successively brings into being” (348).

Which brings us directly to the next class on string bags and birds’ nests.