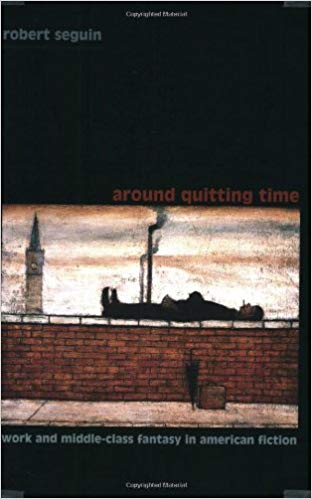 Update 2018: This guest post by Robert Seguin on “Farmers and Foodies of the Future” was originally written in 2015. A post by Amy B. Trubeck on Meal Kits: Our Culinary Future? prompted me to revisit and update the text.

Guest post by Robert Seguin, Associate Professor of English at Hartwick College and author of Around Quitting Time: Work and Middle-Class Fantasy in American Fiction. This essay connected to the 2015-2016 Hartwick College campus theme, Food and Community and continued our off-and-on conversation regarding utopian possibilities (see also Walmart Socialism).

Farmers & Foodies of the Future (FFF)

The following are some thoughts I’ve been mulling over for some time now; all the recent consternation over the job cuts and enrollment woes, and related worries about the potential fate of colleges like Hartwick more generally, have prompted me to sort them out and put them down on paper.

One locus of these thoughts centers on the future of the job market. While any reflections here must naturally bear a speculative stamp, still it seems likely that, on the one hand, the economy will continue to produce reams of what anthropologist David Graeber has witheringly called Bullshit Jobs. This is the realm of corporate bureaucracy and “Dilbert,” where employees spend enormous swaths of time producing reports, and reports on reports, that so often appear to bear little relation to anything important or meaningful. The pay here is often good, and no doubt many, even most, of those doing this kind of work will find ways to make peace with it. But evidence is showing that growing numbers of people are dissatisfied with it and are starting to seek out alternatives.

From another direction, any number of recent analyses have raised the alarming specter of the displacement of human workers by robots and other AI-enabled processes (Barbara Ehrenreich has a useful review in the NY Times; see also Derek Thompson’s A World Without Work). While assembly line and warehouse work have long been a target of robotics, it’s becoming clear that AI technologies will in the relatively near future begin to replace workers in those “symbol manipulating” domains whose blend of cognitive skill and individual judgment had supposedly rendered them safe from technological disruption. Thus we face the coming to fruition of what sociologist Stanley Aronowitz once prophesied as the “jobless future.”

And of course, even short of the foregoing, we all know about talented, creative people who are woefully underemployed.

The other principal locus of these reflections centers on the matter of food and food production, which many of us around Oneonta are interested in. In the widest sense, it’s evident that the dominant mode of mechanized monoculture is not a sustainable agricultural model: whether from the perspective of climate change, ecosystem health, nutrition, or flavor, industrial agriculture is basically a disaster all around. What it does seem to be able to do is feed a great number of people cheaply and with a minimal labor force. But we are coming to understand, given the long-term destructiveness of the practice and its many hidden and defrayed costs, that this cheapness is fundamentally illusory.

Thinking about the environmental and “organic” tradition from Rudolf Steiner to Aldo Leopold to Wendell Berry and beyond, it’s clear that we must approach the whole matter of food–its growing and making through to its cooking and eating–as a highly complex fugue of interrelationships and interdependencies. Such a complex web can only be properly perceived and tended to on a small or, at most, medium scale. But if that is the case, then the truly sustainable production of food will in the future require a great many more of us to be involved in the process. The world is going to need a lot more farmers and food makers–and no, they won’t all be able to be brewers of craft beer.

Such an assertion of course goes wholly against the grain of the great secular demographic and economic shift of the last two centuries, which is the movement of populations from rural and agrarian situations to urban and (post)industrial ones. Can we imagine how even to begin to encourage such a change of direction? And might higher education have any useful or viable role in relation to it? This latter question implies its own directional shift, since the academy’s relationship to agriculture has, through the agricultural schools, been almost wholly in the service of the corporate, industrial model. These in any case are the big, knotty questions, ones to which I scarcely have the beginnings of an answer. But let’s pretend that we can give at least some kind of (qualified, ramified, suitably uncertain) “yes” to them and speculate about where a place like Hartwick College might be positioned amidst all this.

First, more generally, I would think that the Farmers and Foodies of the Future (FFF) will be of a rather different cast than their forebears, in that they will ideally need to have some knowledge about quite a wide range of things: about animal and plant genetics and the chemistry of soil and food; about economics, since the fiscal prospects for small sustainable farms are these days about as good as they are for small liberal arts colleges, and no doubt an array of new strategies for re-envisioning the market and building cooperative structures will have to be developed (perhaps necessitating trips to Spain and Argentina, where they appear to know something about this; and see Don’t let your children grow up to be farmers for one look at the economic difficulties faced by small farmers); about politics, since carving out a space to grow for the future of food will almost certainly demand sustained reflection and intervention at the political level as well; about philosophy, since the conceptual underpinnings of much of this are bound up with problems relating to the connection of human and nature, to the looming “posthuman,” to the place and reach of science, and much else; and at length about aesthetics, as the kind of perception of complex relationships our FFFs ought to have is very much rooted in a certain aesthetic awareness (and yes, I’m probably channeling the pastoral tradition here as well, with its learned shepherds and assorted earthy types who wield the hoe while quoting Wordsworth and Thoreau). In short, our prospective FFFs will be very much in need of a good liberal arts education.

More specific to Hartwick College, we are smack in the midst of a growing web of organic farms and craft food producers. We also have a fair bit of land atop Oyaron which could be ideal for innovative organic food production under the START-UP NY Program. And there’s the new Center for Craft Food and Beverage, which is just beginning to flesh out a fuller sense of its purview and purpose.

So what do I envision? Simply some sort of program where students who are broadly interested in the many facets of food can gain both a theoretical grounding and an array of practical experience: tending a field of crops, making cheese and sausage, grazing a herd, and, why not, brewing some beer. Expanding our connections with local farms would evidently be needed here. Some of these connections could occur through internships, which raises the possibility that, in exchange for the work done, the College might receive a deal on produce/food, thus beginning the process of weaning us off the stuff that the semis from Sysco regularly deliver (a web featurette a few years back surveyed the colleges with the best food; the great majority of them either grew their own or sourced it locally). In any case, the idea is that students would, as they progress through the program, acquire a sense of what kind of FFF they might like to be.

Alas, it seems entirely likely that, if you polled our prospective applicant pool, very few of them would express any interest in being any kind of FFF at all. Since the “if we build it they will come” approach appears ill advised in the current climate, something like this would have to start out small and hopefully build momentum. My hunch is that a considerable number of young people would be intrigued and even excited by the prospects of FFFism, if they only had some exposure to it. But this is just a hunch, soliciting some measure of study, and doubtless another reason to start small.

Perhaps there is something Utopian at the root of these musings; indeed, my sense is that genuinely sustainable food production, if it is to be financially viable for producers as well as affordable for significant masses of people, poses a deep challenge to capitalism as it is currently structured (little wonder that the Slow Food movement in Italy was begun by a bunch of communists). I’m intrigued, too, by the possibility of working to loosen the (practical but also ideological) bond between the farm and the family that has obtained for so long, which strikes me as an increasingly restrictive and unproductive tradition in our current situation.