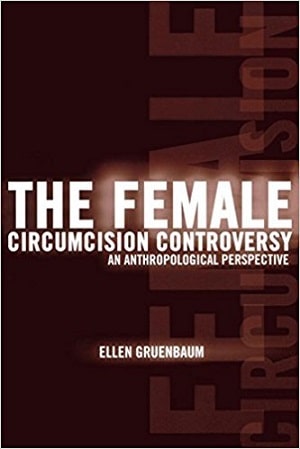 In the May 2011 New York Times Nicholas Kristof called female circumcision “A Rite of Torture for Girls.” My comment at #146:

I’m not sure why Kristof is going through this rehearsal. It will inevitably bring cries of “barbarism” and condemnation of “primitive” peoples.

The most important part of Kristof’s article are these sentences: “it is clear that the most effective efforts against genital mutilation are grass-roots initiatives by local women working for change from within a culture. In Senegal, Ghana, Egypt and other countries, such efforts have made headway.”

For more perspective, try the book The Female Circumcision Controversy: An Anthropological Perspective by Ellen Gruenbaum (2000) or the article by Corinne Kratz, Circumcision, Pluralism, and Dilemmas of Cultural Relativism.

Another resource is a 2007 article by Mwenda Ntarangwi, “I have changed my mind now”: U.S. Students’ Responses to Female Genital Cutting in Africa in Africa Today. But despite thousands of anthropology professors using the Corinne Kratz article (or others) for Introduction to Anthropology classes, the comment streams inevitably fill up with outcry against barbarism.

Again, to be clear, anthropology does not condone or defend female circumcision. But sensationalistic articles help no one–except make us feel better about our supposed advances and civilization. Kristof could be considered Exhibit A for “white men saving brown women from brown men” as Lila Abu-Lughod put it in Do Muslim Women Really Need Saving? (2002:784).