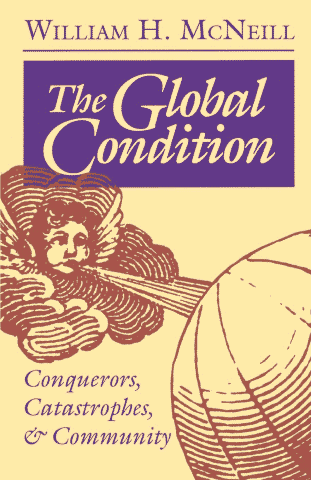 In the past decades, we have witnessed the rise of countless globalization stories. But the very proliferation of stories of globalization as newness have obscured the real global processes that stretch back over five hundred years:

Culturally, the world we inherit today is the product of global flows that started in the late fifteenth century and continue to affect human populations today. Yet the history of the world is rarely told in those terms.

Indeed, the particularity of the dominant narratives of globalization is a massive silencing of the past on a world scale, the systematic erasure of continuous and deep-felt encounters that have marked human history throughout the globe . . . For sushi in Chicago to amaze us, we need to silence the fact that the Franciscans were in Japan as early as the fifteenth century. For Muslim veils in France to seem out of place, we need to forget that Charles Martel stopped Abd-al-Raman only 300 miles south of Paris two reigns before Charlemagne. To talk of a global culture today as a new phenomenon, we need to forget that Chinese chili paste comes from Mexico, French fries from Peru, and Jamaican Blue Mountain coffee from Yemen.

Every time I revisit Michel-Rolph Trouillot’s chapter on “North Atlantic Fictions: Global Transformations, 1492-1945,” the facts always seem to catch me by surprise. I should know this material–Trouillot draws from the historian William McNeill’s The Global Condition and many of these facts are recovered in Charles Mann’s 1493: Uncovering the New World Columbus Created. Nevertheless, it always seems the latest round of glorifying or lamenting globalization is another erasing. The irony of the information age: all these facts are on Wikipedia and our smart phones, yet it is the wonder of Wikipedia and the smart phone that hides their importance.

Especially striking is the correspondence between what are always billed as the first truly ethnographic immersion studies–Malinowski, Boas, and Ruth Benedict’s proclamation of the world’s peoples as a “laboratory of social forms” (1934:17)–and what was a peak period of global flows. “The flow of goods and capital across political and geographical boundaries was not always increasing but it did reach a peak in the period immediately preceding World War I” (Trouillot 2003:32). All the trends of capitalism we think of as characteristic of our time had already been going on and were by certain measures peaking around 1910: multinational corporations, the mass migration of labor, the rise of finance capital and speculative markets, the concentration of wealth and inequality.

As Trouillot points out “these massive movements of goods, populations, and capital produced abrupt changes not only in the material conditions of the populations involved but also in their practices and in the ways in which they saw themselves and the world around them” (2003:32). Again, all the terms and complex identities we think of as characteristic of our day–of people as hybrids, of the bi-cultural or multi-racial, the transnational–all of that had been well underway for 300-400 years before any anthropologists showed up. Here Trouillot echoes what Sidney W. Mintz described in a more caustic assessment of contemporary anthropology: “The massive movement of people globally is centuries old. The identification of persons with more than one community is similarly ancient. . . . Things aren’t what they used to be, to be sure; but they never were” (The Localization of Anthropological Practice: From area studies to transnationalism 1998:131).

Anthropologists typically tried to journey to distant places believed to be less affected by these global flows. Of course the very ability to arrive at a distant fieldsite was usually because that fieldsite had already been incorporated into a colonial undertaking. Anthropologists often believed they could separate or shear off the influence of the modern from the traditional. But most peoples anthropologists encountered had already been through hundreds of years of direct or indirect influence. And as we now know, the traditional is often fueled by the modern, as peculiar symbioses continuously arise–like televisions and treadle looms to use the example from my colleague Rudi Colloredo-Mansfeld’s The Native Leisure Class. And we can fully expect that these symbioses and traditional-modern fusings and re-fuelings had already been through several cycles before the anthropologists arrived.

To ask these questions is not to say that everyone was determined by their position in a global-colonial economy, nor to ignore previous histories and interconnections, but to try and take better account of what was already a world in transformation.

These global flows form part of what Trouillot terms a “geography of management” which became realized as modernization, “those aspects of the development of world capitalism that reorganize space for explicitly political or economic purposes” (2003:37). This management is always intertwined with a “geography of imagination” or the ideas and identities of modernity, a projection of individual and collective identities in relation to categories of time and space.

Modernity is a first example of North Atlantic universals:

North Atlantic universals are particulars that have gained a degree of universality, chunks of human history that have become historical standards. . . . North Atlantic universals so defined are not merely descriptive or referential. They do not describe the world; they offer visions of the world. They appear to refer to things as they exist, but rooted as they are in a particular history they are evocative of multiple layers of sensibilities, persuasions, cultural and ideological choices tied to that localized history. They come to us loaded with aesthetic and stylistic sensibilities, religious and philosophical persuasions, cultural assumptions ranging from what it means to be a human being to the proper relationship between humans and the natural world, ideological choices ranging from the nature of the political to the possibilities of transformation. There is no unanimity within the North Atlantic itself on any of these issues, but there is a shared history of how these issues have been and should be debated, and these words carry that history. Yet since they are projected as universals, they deny their localization, the sensibilities, and the history from which they spring.

North Atlantic universals are always prescriptive inasmuch as they always suggest, even if implicitly, a correct state of affairs: what is good, what is just, what is sublime or desirable–not only what is, but what should be. (2003:35)

Terms like modernity are seductive: they evoke feelings and sentiment while hiding those feelings behind a language of rationality; they hide their particular origins while projecting universality; they seem clear while hiding ambiguity; and they are often best felt when projected against what they are not. “We have a stronger sense of what modernity may connote when we point to the naysayers–the Taliban of Afghanistan, a native tribe in the Amazon, or whichever figure plays temporarily the good or evil face of the non-modern–than when we investigate those who praise it” (2003:36; I find this very useful to read in conjunction with Anna Lowenhaupt Tsing’s discussion of universals in Friction: An Ethnography of Global Connection).

For just as modernity purports to describe an ideal and universal state of affairs, it always entails others–others who are somehow behind and need to be modernized, to “catch up”; others who fall off the main course of history, no longer perceived as really part of the modern world; or others who are romanticized as noble outliers. Trouillot then discusses how modernity “always requires an Other from within” (2003:41). Drawing on Mintz and Eric Wolf, Trouillot sees the Caribbean as a place which “was modern from day one, from the very day colonialism imposed its modernization” (2003:44; see also Anthropology’s Unfinished Revolution).

There is in all this a crucial lesson for anthropology:

As a discipline, we have launched the most sustained critique of the specific proposals rooted in these universals within academe. Yet we have not explored enough how much these universals set the terms of the debate and restricted the range of possible responses. In the context of this much-needed reformulation, the Caribbean’s most important lesson is a formidable one, indeed. That lesson, as I see it, is that modernity never was–never could be–what it claims to be. (2003:46)

This takes us back to a striking passage in Ruth Benedict’s Patterns of Culture, as relevant for today as for the 1930s: “There is no reason to suppose that any one culture has seized upon an eternal sanity and will stand in history as a solitary solution of the human problem” (1934:237). Benedict here is one of the key people launching a critique of North Atlantic universals based on an appreciation for cultural relativism. However, by endorsing the idea of separate cultures, as isolated laboratories that could be studied apart from the management and imagination that had created those possibilities, the seduction of modernity endured. Ideas of development and modernization as “catching up” would only increase. Little wonder that for the most recent 2005 reprint, Patterns of Culture features the New York Times description of 1974: “a signpost on the road to a freer and more tolerant life” (Jean Zorn).

Signpost on the road to The West?

In some ways this chapter of Global Transformations reads like an outline of a project Trouillot called The West:

He could not complete his most ambitious project, “The West.” The project, ranging from the Renaissance to the present, intended to combine a trenchant critique of European colonialism and Euro-American capitalism with a thorough investigation of possibilities for cultural creativity and constructive political-economic development for peoples too often considered the objects of world history or marginal to its main crosscurrents. (Drexel Woodson and Brackette Williams, In Memoriam Dr. Michel-Rolph Trouillot, 2013:156)

Trouillot again in this chapter insists on the importance of the Renaissance in the creation of the West, a historical fact that has been recently buried:

Now dominant North Atlantic narratives–reflecting the world domination of the English language, the expansion of Protestantism as a variant of Christianity, and the spread of Anglo-Saxon and Teutonic sensibilities–reduce the crucial role of Portugal and Spain in the creation of the West. A related emphasis on the Enlightenment and the nineteenth century, and the downplay of the Renaissance as a founding moment, also lead to the neglect of the role of the Caribbean and Latin America in the production of the earliest tropes associated with modernity. That chronological amnesia crucially impedes our understanding of the North Atlantic itself. (2003:44-45)

And indeed, Trouillot here takes us into the poetry of Baudelaire, the “eulogist of modernity,” but as inspired by Jeanne Duval, probably of Haitian descent: Jeanne Duval et Charles Baudelaire: Belle d’abandon.

Inspiring and provocative, these pages remain a hint of a still-to-be-written story: a poetry, a history, a multi-lingual project, anthropological fieldwork and philosophy, uncovering the blinders of triumphal globalization stories while providing a true sense of human possibility and pitfalls.