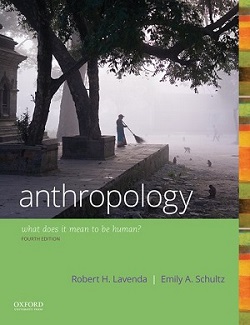 For the 2019-2020 version of Intro-to-Anthropology, I used some of the same readings but switched textbooks to Muckle and González, Through the Lens of Anthropology: An Introduction to Human Evolution and Culture.

Chapter 1, “What is Anthropology?”

Module 1, “Anthropology, Science, and Storytelling”
“The Evolutionary Enigma of the Human Eyebrow” by Penny Spikins on Sapiens (2018)

3. Why is Evolution Important to Anthropologists?

Chapter 3, “What Can the Study of Primates Tell Us?”
“Bonobos Spied Sharing a Feast” by Nicola Jones on Sapiens (April 2018)

Chapter 4 (part 1 of 2), “What Can the Fossil Record Tell Us?”
“What moves us? How mobility and movement are at the center of human evolution” by Kuhn, Raichlen, and Clark in Evolutionary Anthropology (May/June 2016).

Chapter 4 (part 2 of 2), “What Can the Fossil Record Tell Us?
“Humanity’s Story Has No End of Surprising Twists” by Michelle Langley on Sapiens (March 2018)

Chapter 5, “What about Human Variation?”
“How race becomes biology: embodiment of social inequality” by Clarence Gravlee in the American Journal of Physical Anthropology (2009).

8. Chapter 6, “How Do We Know about the Human Past?” (169-199)
“Science, the Media, and Interpretations of Upper Paleolithic Figurines” by April Nowell and Melanie Chang in American Anthropologist (2014)

10. Chapter 7 (part 2 of 2), “Why Did Humans Establish States?” (218-235)
“Marketing conquest and the vanishing Indian: An Indigenous response to Jared Diamond’s Guns, Germs, and Steel and Collapse” by Michael Wilcox in Journal of Social Archaeology (2010)

12. Chapter 8 (pt 2 of 2), “Does the Idea of Cultural Relativism Help Us?” (246-256)
“The campaign against Female Genital Cutting: empowering women or reinforcing global inequity?” by Susie Latham in Ethics and Social Welfare (2016).

15. Chapter 11, “Why Do Anthropologists Study Economic Relations?” (337-361)
“Eating Christmas in the Kalahari” by Richard Borshay Lee in Natural History (1969)

20. Chapter 15, “What about Social Inequality?”
“What Our Skeletons Say About the Sex Binary” by Alexandra Kralick in Sapiens (November 2018)
Film: Race: The Story We Tell & Race: The House We Live In (Episodes 2 & 3 of “Race: The Power of an Illusion”)

My most current version of this course is Intro to Anthro 2021 with a YouTube lecture playlist and using the fifth edition of Anthropology: What does it mean to be human?