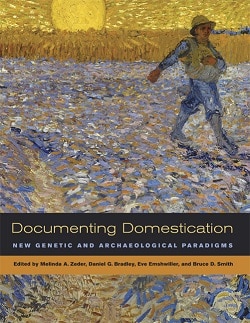 In the previous class on Archaeology and Figurines, we tried to deal with the traditional stereotype that “Man the Hunter” is the prime mover of human history. In this class, we first begin with another related and traditional idea, which was that before the domestication of plants, people lived by collecting from wild nature, and that this corresponds to a wild or natural state of human beings. With the advent of farming, there is a belief in progression, and the root words of culture, agriculture, and cultivation are all related because it is assumed that being cultured is part of cultivating. Finally, this leads to the progress of modern civilization

Jared Diamond’s “Worst Mistake” from 1987 is the summary of a Revisionist argument. It is meant to shake our assumption of progress and argue that with agriculture everything went to Hell. (I sometimes like to show a clip from AC/DC’s Highway to Hell to illustrate the revisionist perspective).

If agriculture is so bad, why do it?

Diamond claims agriculture was a need, not a choice. The idea is that population pressures forced humans to seek quantity and trade away quality. Then, those who adopted agriculture drove out the others. For Diamond, this is a seductive blessing, which is still unrealized for many people around the world. It’s an argument that still gets people animated and commenting on Diamond’s 1987 article as if it were published today. [One of my most popular blog-posts is an analysis of Diamond’s Worst Mistake in the History of the Human Race.]

At this point, a clip from Guns, Germs & Steel (film version)

Domestication opens new paths of human-plant-animal interaction. These changes in human-plant-animal relationships then become part of a co-evolutionary process. I prefer this to ideas of “interference” and “control.” Humans may act deliberately, but are hardly in control of the process. Also, humans, plants and animals continue to interact with “wild” counterparts, and there are great examples of domesticates which have then “gone wild.” Finally, we should not think that this is a moment when people go from being “natural” to “unnatural.” People are still part of the natural world and are not “interfering” with nature.

How did domestication occur?

Domestication may not have been altogether conscious, and so mutualism is an important idea (Lavenda & Schultz, 204). However, people in the past were also sophisticated and had knowledge of their environments. They certainly tried conscious manipulation to encourage growth (204). Here, the importance of “beneficial” mutations (Lavenda & Schultz, 207) becomes critical, as the mutations that might be favorable for domestication would not have been adaptive in other environments.

1. Scavenging
2. Gathering and Hunting
3. Horticulture
4. Agriculture
5. Pastoralism: emerges after agriculture, and always in relationships of trade with agricultural societies.

Although our studies of agriculture in the Middle East once led to “one motor” ideas, we now know there is not a single cause or area of domestication (212). The more we know about the Middle East, the more complex it looks. It is also important to note that domestication is not equivalent to sedentism (206), and that sedentism usually precedes domestication.

In this section, Lavenda and Schultz take us through some of the issues raised by the Jared Diamond article, including the increase in population increase, seeking quantity instead of quality, increased labor demands, the decline in height, and diseases.

Domesticated crops back then are same things we eat in dining halls today. Our monocropped calories are mostly from [see Michael Pollan When a Crop Becomes King (2002)]

Differences in New World and Old World domestication patterns help explain major encounter in world history. In Europe there were large animals for plowing and for war. There are also differential disease vectors–see is 1610 the beginning of the Anthropocene?

Domestication and agriculture “provided new opportunities for social complexity” (Lavenda & Schultz, 221). This makes possible–but not inevitable–new forms of political control and state government: Urban settlements, Public works, Writing, Monuments, Standing Armies. This is the subject of the next class on Social Complexity and States.