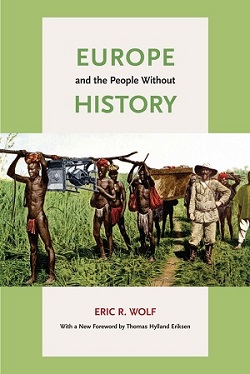 For Intro to Anthropology 2018 there were two readings on “why do anthropologists study economics,” broadly considered:

For an update from 2021, see Economies. I previously considered this material, using the 3rd edition of Lavenda and Schultz in a class asking is capitalism the best economic system?

Many anthropologists think about economic systems in terms of phases of production, distribution, and consumption (Lavenda and Schultz, 339). One of the key points anthropologists stress is that production for a cash market is not the only way to organize an economic system. People make use of a variety of complex systems that work well without money or markets.

One example of a different exchange systems are those run through ideas of reciprocity (Lavenda and Schultz, 343-44). Such reciprocal exchange relationships characterize gathering and hunting societies. For anthropologist Marshall Sahlins (drawing on the work of Richard Lee), this very different way of thinking about human needs led him to coin the phrase the “original affluent society” (in Lavenda and Schultz, 354). As seen in Jared Diamond’s “Worst Mistake in the History of the Human Race,” such re-investigations of hunting and gathering challenge the progressivist perspective. When Richard Lee asked Ju/’hoansi why they did not grow crops: “Why should we, when there are so many mongongo nuts in the world?” (see Lavenda and Schultz, 354).

As Lee discovered during his work, an economic system based on reciprocity can lead to very different social attitudes. This becomes clear as people respond to his attempt to “repay” his hosts with a Christmas Ox! This leads Lee to conclude: “As I read it, their message was this: There are no totally generous acts. All ‘acts’ have an element of calculation. . . . After all, to kill an animal and share the meat with people is really no more than Bushmen do for each other every day and with far less fanfare.”

Although it is interesting to read about anthropological fieldwork, we might also wonder about how the Ju/’hoansi learned to appreciate corn and tobacco. Or how so many people in Africa began growing corn. It is important to realize that the world had become very interconnected before any anthropological studies were conducted, and that the roots of capitalism came from the colonies.

One of the most important stories comes from the mines of Potosi. The silver of Potosi would transform the world economy. From around 1570-1650, Potosi became one of the largest cities in the world, larger than London and Paris at the time. Potosi became “the first city of capitalism” in the words of anthropologist John Weatherford. And although there are various ideas about how the US dollar ($) sign emerged, the most plausible is that it came from the Potosi mint mark.

After that, the story of capitalism shifts into the Caribbean, where British, French, and Dutch colonial planters seized islands once under Spanish control and began to establish sugar cane plantations. As anthropologist Sidney Mintz has argued, the Caribbean sugar plantations transformed global diets, eventually feeding the workers of the European Industrial Revolution. Mintz’s even more radical argument is that the slave-based plantation system provides a template for European factory organization. (Note that in 2021 I talked about this material to introduce the idea of culture; see the class on social life and this YouTube lecture.)

In 1982, anthropologist Eric Wolf debuted an incredible book, Europe and the People Without History. Eric Wolf describes a world of interconnection: “The central assertion of this book is that the world of humankind constitutes a manifold, a totality of interconnected processes, and inquiries that disassemble this totality into bits and then fail to reassemble it falsify reality” (1982, 3; see Geography, States, Empires for an extended discussion of Wolf’s work0.)

Wolf drew on Karl Marx to delineate three broad modes of production (in Lavenda and Schultz, 347): A Kin-ordered mode of production, which would correspond to most gathering & hunting, horticulture, and some herding societies. A Tributary mode, corresponding to many farmers and herders with a political ruling class. And finally a Capitalist mode, in which production is for profit and leading to industrial intensification.

For Wolf, the “people without history” not only really did “have history,” but they made capitalism and Europe possible. Moreover, the people anthropologists studied had already been shaped and transformed by the global transformations from 1500-1900, long before the first academically-trained anthropologists ever did ethnographic fieldwork.

So for example if we turn back to Richard Lee’s work, mongongo nuts are great, but what goes un-discussed is the German-led colonial genocide of 1912-1915 (Robert J. Gordon, Hiding in Full View, 2009). If Gordon is correct about the genocide in 1912-1915, then it would have had obvious demographic effects at the time of Lee’s work.

In some ways when trying to think about the question of “is capitalism the best economic system?” anthropology faces the impossible tasks:

Although we spent much of this class considering big issues of global interconnection and the rise of capitalism, it is important to note two points we can take from the finale of the Lavenda and Schultz chapter:

Here it is useful to explore the anthropology of food and nutrition (Lavenda and Schultz, 359-60) through the work of Carole Counihan. Lavenda and Schultz end the chapter by saying that “anthropologists have long argued that economic life cannot be considered apart from political relations in any society” (360). Political relations were the subject of the next class.