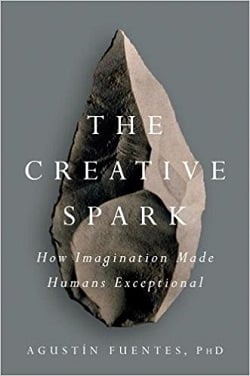 For Intro-to-Anthropology 2018 there were two readings:

These materials were for Intro to Anthropology 2018. For the updated 2021 version using the 5th edition of Lavenda and Schultz, see Evolution is Life in Process:

Why is Evolution a Scientific Theory?

Building from the previous class on Science and Storytelling, Lavenda and Schultz open this chapter by drawing on the work of philosopher of science Philip Kitcher (32). Kitcher discusses “successful scientific theories” as

To say that evolution is a scientific theory is to emphasize how successful it has been in these areas.

Ideas about natural world before evolution

In order to understand the emergence of evolutionary ideas, it is important to know the context out of which these ideas developed. Before evolutionary thinking, European notions of the natural world combined Judaeo-Christian or biblical understandings with Greek philosophy (Lavenda and Schultz 2018, 33). In some ways, these notions were quite different. Greek philosophy “thought the world had been, and would be, around forever” (33). In contrast, calculations from the Bible resulted in a world that was about 6000 years old, or as was once famously calculated, that the earth was created on October 23, 4004 B.C. (Lavenda and Schultz 2018, 38).

Despite these differences, the Christian and Greek traditions shared the idea of essentialism, “a belief in an ideal world of perfect, eternal, unchanging forms that exist apart from the imperfect, changeable, physical world of living things” (33). For the Christian tradition, this meant that species had essences which were unchanged since creation.

Great Chain of Being

The prevalent idea from the European Middle Ages, combining Greek philosopher Aristotle with Christianity, was of a “Great Chain of Being” (Lavenda and Schultz 2018, 34). In this “comprehensive framework for interpreting the natural world,” the world was created by God and arranged in a hierarchy (34). “Creatures farthest away from divine perfection were lowest in the hierarchy, whereas creatures most like God (such as the angels) ranked highest” (34). As noted, this was a comprehensive framework for interpretation, and Carolus Linnaeus was working within this framework when he developed his taxonomic classifications (35).

Interestingly, what began interrupting this comprehensive framework was not new idea or hypothesis, but the discovery of new material evidence (Lavenda and Schultz 2018, 36). Fossils of extinct species were discovered, and people could see that these were similar to but different from existing creatures. The new evidence led to a number of debates which Lavenda and Schultz describe as Catastrophism versus Uniformitarianism (36). But what was clear was that people had to revise the idea of essentialism. The new evidence prompted thinking into how species might be changing over time.

Another crucial part of the new material evidence was the realization that the earth was much older than the calculations from the Bible (38). New calculations about the age of the earth would enable time for evolution to occur.

As noted above, in this case the new material evidence preceded the formation of new ideas. With the revision to the idea of essentialism, people began to speculate on how species might change over time. Jean-Baptiste de Monet de Lamarck (1744-1829) developed the idea of “Transformational Evolution” or “Lamarckian evolution” (Lavenda and Schultz 2018, 36-37)

In Lamarckian evolution organisms “change physically in response to environmental demands” (37). Those changes, or acquired characteristics, can then be passed down to offspring. Lavenda and Schultz use the example of the “panda’s thumb” (37-38) to illustrate the difference between Lamarck and Darwinian thinking, although I prefer the classic example of giraffes.

Natural Selection as Mechanism of Evolution

Again it is important to understand that the idea of evolution was introduced well before Darwin. The idea of natural selection or “descent with modification” (Lavenda and Schultz, 38) as a mechanism of evolution was developed independently by Charles Darwin (1809-1882) and Alfred Russel Wallace (1823-1913). Both observed that species varied over time & space, and they concluded that similar but distinct species descended from a shared ancestral species. [For an interesting 2021 look at the Darwin-Wallace exchange as it relates to contemporary issues, see The Good, The Bad, and the Scientists Who Don’t Know the Difference by Jonathan Marks.]

One of the most important ingredients for natural selection to occur is not essentialism but variation, which is a “ground condition of life” (Lavenda and Schultz, 39). Here, I would like to introduce another word for variation: diversity. Diversity is in fact a fundamental element that makes natural selection and evolution possible. In fact, we might see life itself as a proliferation of difference, diversity, and variation.

Crucially of course for natural selection to occur we also need heredity, competition for resources, and differential reproduction (40).

After originally talking about “descent with modification,” Darwin borrowed Spencer’s “survival of the fittest” phrase (Lavenda and Schultz 2018, 40). Some anthropologists have argued that “Survival of the Fittest” ideas were a big mistake, because it mischaracterized evolutionary processes.

Effectively, evolution simply joined the “links” of the Great Chain of Being but the underlying idea of perfection and ascent remained. This also resulted in a search for “missing links” when we really should have been looking for most recent common ancestors.

We now know there is no such thing as absolute fitness (Lavenda and Schultz 2018, 41). Fitness can only be seen in an always-changing environment. We also know that observable traits cannot all arise through adaptation. Lavenda and Schultz introduce the idea of exaptation which is necessary for explaining traits that could not arise through gradual adaptation (40-41).

During Darwin’s time, inheritance was understood as a “pangenesis” or blended inheritance (Lavenda and Schultz 2018, 41-42). One of the most important elements of Mendelian genetics was that it disproved pangenesis, or blending. Instead, variation could be preserved as individual units. This allowed for a greater diversity of traits which might have been washed out if inheritance were simply blending.

We now know that inheritance is most often very complex, and not simply a one-gene-for-one-trait simplification of Mendelian ideas (Lavenda and Schultz 2018, 43-52). Lavenda and Schultz discuss polygenic inheritance and pleiotropy. While some of these sections can become very technical, the important point for our purposes is recognizing how much genes are a dynamic part of a developing organism, all within a constantly-changing environment. These realizations lead us to recent developments in evolutionary theory.

Building on the idea of genes as dynamic in an environment, we can also recognize that organisms alter the environment. This can be seen readily with structures like beaver dams and lodges, but a wide variety of organisms actively alter their environments. Some of these alterations seem intentional, but others are quire unintentional. Those alterations can change conditions of selection for the next generation, and when this occurs we can speak of “niche construction” as an evolutionary force (Lavenda and Schultz 2018, 53-55).

Although we can see niche construction for many creatures, human beings have become expert niche constructors. This is where Agustin Fuentes on the human niche becomes important. Fuentes notes that the human niche is “a niche involving expanded innovation and increased use of extra-somatic materials in a dynamic feedback between action, perception and neural structures, which in turn altered the potentials for information acquisition and problem solving” (Fuentes 2017:2).

From an anthropological perspective, evolution is very much influenced by human agency (Lavenda and Schultz 2018, 55). Actions like moving and migrating, altering the environment, or selecting mates can reshape evolutionary processes. This means that “human culture and particularly complex human life-history patterns” (Fuentes 2017:3) also become very important for evolutionary processes.

These realizations make straight-forward application of natural selection models difficult to directly apply to humans. Instead, we may wish to rethink the idea of human nature (discussed in our first class on human universals) to see human nature as “a suite of potentials generated from our evolutionary history, and present, and our flexible capacity to create and sustain human cultures and to be shaped by them” (Fuentes 2017:1).

Revisiting the Great Chain of Being

Early understandings of evolution generally kept in place ideas about the “Great Chain of Being,” which led to an idea of evolution as ever-ascending progress. We can now take this information and use it to challenge these ideas. Evolution is simply change over time; it is not a guaranteed forward-march to better creatures. Since the environment is always changing, in dynamic interaction with organisms, it is impossible to specify absolute fitness (Lavenda and Schultz 2018, 41). A trait that might be adaptive in one environment, becomes maladaptive in others.

This means that human beings are not an inevitable result or pinnacle of evolution (56). “Indeed, the very notion that organisms are ‘going somewhere’ along a linear evolutionary ‘path’ has been questioned” (56).

Moreover, evolution doesn’t always “work,” in the sense that the traits that are necessary to survive in a changing environment may or may not occur. They cannot just be called into action as environments change. It is estimated that “of all the species that have ever existed 99.999% are extinct” (Lewontin in Lavenda and Schultz 2018, 56).

Finally, evolution is not a necessary path from simple to complex. Sometimes a simpler or more flexible organism is more adaptable to changes. We are still in the Age of Bacteria (Gould in Lavenda and Schultz 2018, 56), and we now know that there are approximately the same number of bacteria cells as human cells for living human organisms.

Evolution in the Anthropocene

“The study of evolution in contemporary biology is very lively” write Lavenda and Schultz (55), and these thoughts are a kind of invitation to join the effort. Fuentes provides a helpful summary of recent lively debates, writing about the Extended Evolutionary Synthesis. Understanding human evolution will be crucial as we begin to comprehend how human niche construction is now apparent on a global scale. Fuentes describes how “the pace and diversity of cultural and material change ratchets up across the Holocene (last 10,000 years or so), exploding to an even greater pace in what many term the Anthropocene (last approximately 3–5 centuries)” (Fuentes 2017:5). Understanding the consequences of human niche construction will be an important task if we are to survive our own environmental modifications.