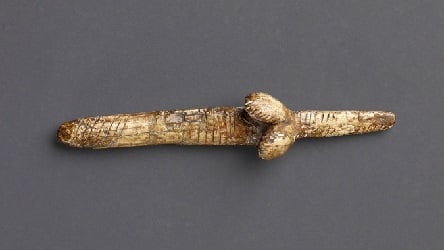 For Intro to Anthropology 2018 there were two readings on doing archaeology via figurines:

These readings were for Intro to Anthropology 2018. Page numbers below are for the 4th edition of Lavenda and Schultz. For 2021, this material appeared in a lecture on Gender Archaeology:

We began class with a recap from the spread of Homo sapiens throughout the world. We are looking at the time period from about 30,000 to 20,000 years ago in which human beings are in many different habitable climates, but are not cultivating any crops. What we used to think (and many people still think) about the stages of human history is that there is a transition from “Man the Hunter” –> “Man the Herder” –> “Man the Farmer” –> “Man the Scientist.” Throughout part 2 of this course, we will be questioning this mythology. Lavenda and Schultz do provide a rough outline of this kind of thinking as they discuss Bands, Tribes, Chiefdoms, States, and Empires (180-83). However, Lavenda and Schultz do not intend to see this as a necessary progression, and instead see these as labels for social groupings that can change over time.

We now know that the “Man the Hunter” idea has been tremendously overstated and mythologized. We’ve learned about the importance of “Woman the Gatherer,” and that for many groups, women provide about 70% of daily calories. We’ve learned that men also gather. And, we’ve learned that women are involved in hunting. Much of what we call “hunting” is not necessarily solitary stalking of big game, but things like net hunting, working with snares and traps, and doing animal drives and surrounds. These are activities that are often done in groups, and often involve female participation.

Some people have re-portrayed this story as “Man the Scavenger” or even Man the Hunted (the title of a 2005 book by Donna Hart and Robert W. Sussman).

In the last 50 years, there has been a major reassessment of the groups we now call “Hunters and Gatherers.” These are groups that thrived in a number of diverse habitats, deploying a successful subsistence strategy around the habitable world. Their toolkit and social complexity was much more sophisticated than we once thought. Nowell and Chang summarize that

We have also learned how much of hunting and gathering involves environmental knowledge and management. [I’ve posted about this as Many Ways of Gathering & Hunting.] Finally, in the last decade, we have become aware that a simple gendered division of men-as-hunters combined with women-as-gatherers does not capture the full range of gender complexity in these societies.

“New Women of the Ice Age”

In previous versions of this class, I have assigned the 1998 article by Heather Pringle, “New Women of the Ice Age” which appeared in Discover. Pringle argues that the figurines were used for female-centered rituals of prophecy, divination, and reading the future, and that archaeologists found this out by exploding the figurines (compare with Nowell and Chang “that they were used in rituals involving the purposeful destruction of figurines” [570]).

Others have argued that the figurines have more to do with female body perspective during pregnancy and reproduction, so they would have been useful for medical reasons. This is the argument in Lavenda and Schultz (132-34), taken from Toward Decolonizing Gender: Female Vision in the Upper Paleolithic, or as Nowell and Chang summarize “that they acted as good luck charms or totems during childbirth; that they represent female self-portraits; or that they are illustrative of a gynocentric, preagricultural society where particularly ‘female’ characteristics were prized” (570).

Why won’t it stop?

Nowell and Chang begin with the interesting observation that the first interpretation of figurines (before World War II) was one of “racial types” and only later did the interpretation shift to sex (563). They note that women make stone tools and art–not just men (564). They ask us not to assume pornography is only consumed by men (564-65). They insist that there is lots of variability in the figurine Waist-to-Hip Ratio or WHR (565-66), so there is no one “ideal type.”

They also ask why we assume certain artifacts are female (see the featured image above). And they warn us not to assume an ancient gender binary (568-69) which corresponds to our own stereotypes.

Why does “Man the Hunter” endure as a powerful stereotype?

This leaves us with the question of why these interpretations are so durable. First, of course, science is not perfect, and it is part of a sexist society. But there may be some other reasons as well. We like to glorify human achievement. Nobody really wants to be known as a scavenger. Another reason is the prevalence of hunting stories. People talk more about hunting than they do about gathering, even if a big hunt is only an occasional (or once-in-a-lifetime) achievement. There is also the fact that in the archaeological record, the evidence for big game hunting lasts longer. Large-boned animals, hunting instruments, and paintings are more durable than nets and rabbit bones.

Finally, and this brings us back to Nowell and Chang, people just do not like multiple possible interpretations and complexity (Nowell & Chang, 570-71). The idea that there might be different local interpretations for figurines and more than one answer–it is simply not as appealing as a simplistic and sensationalistic headline.

Others find archaeology fascinating because of the dirt and digging. But, as Lavenda and Schultz point out, there is increasing importance of techniques like:

When archaeologists excavate, it’s because they need to know “a lot about a little” (Renfrew and Bahn in Lavenda & Schultz, 175). Excavation destroys a site. It’s expensive in time and money. Excavation involves securing permits and a thorough consideration of possible ethical issues. Excavations must be very carefully documented with a 3-dimensional grid. Increasingly, excavations involve digital documentation.

For a great example of the use of LiDAR, see Laser Scans Reveal Maya “Megalopolis” Below Guatemalan Jungle at National Geographic (February 2018):

The results suggest that Central America supported an advanced civilization that was, at its peak some 1,200 years ago, more comparable to sophisticated cultures such as ancient Greece or China than to the scattered and sparsely populated city states that ground-based research had long suggested. In addition to hundreds of previously unknown structures, the LiDAR images show raised highways connecting urban centers and quarries. Complex irrigation and terracing systems supported intensive agriculture capable of feeding masses of workers who dramatically reshaped the landscape.

For more on how contemporary archaeologists re-examine past finds, see Why the Famous Folsom Point Isn’t a Smoking Gun in Sapiens (2017). “Today, archaeology is a truly multidisciplinary science that is far more advanced than the archaeology of the 1920s. We now use sophisticated excavation-control techniques. We screen the dirt as we dig. We collect every artifact, not just the aesthetically appealing ones. And we have many analytical techniques to use in the lab, after the digging is done.”

How should we do archaeology?

Lavenda and Schultz emphasize that archaeology is a “stewardship of the remains of the human past” (170). As such, it is important to understand archaeology and contemporary identity (183). In their view, NAGPRA should lead to collaboration and negotiation, which results in better archaeology (184).

Lavenda and Schultz also discuss the work of Renfrew and Bahn in Australia, with “archaeology as a tool of civic engagement” (193). They end the chapter with a section on “Cosmopolitan Archaeologies” (195-197), which might be summarized as “negotiations whose outcome cannot be predicted in advance” (197).

[Image credit, Research Gate uploaded by Melanie Chang, photo from the collection of and courtesy of the Moravské zemské muzeum.]